How far was Lloyd Georges fall from grace in 1922 the result of his own mistakes after 1918?

A general election held in 1918 gave Lloyd George and the Conservative coalition a very comfortable majority in parliament, but it also left Lloyd George in an untenable position. The coalition consisted overwhelmingly of Conservatives, meaning that Lloyd George’s hold on power was extremely weak. He could not do many of the things he would have liked to do in a purely Liberal government, simply because he did not have the support of the Conservatives.

Don't use plagiarized sources. Get your custom essay on
“ How far was Lloyd Georges fall from grace in 1922 the result of his own mistakes after 1918? ”
Get custom paper
NEW! smart matching with writer

Firstly was the issue of the German reparations and punishments. There was a strong feeling in Britain that Germany was fully responsible for the war, and therefore should be punished severely. Lloyd George did not subscribe to this opinion. He felt that Germany should be punished, but not to the extent that it ceased to exist. He came to the conclusion that if Germany was effectively destroyed by war payments, it would leave a large power vacuum in the centre of Europe.

Lloyd George was worried that this gap would be filled by the Communist ideals of the Bolsheviks.

Along with this, the post-war depression that was consuming Britain resulted in a loss of popularity for Lloyd George. The new markets Britain were relying after the war had not materialized, and several of Britain’s old markets had found cheaper suppliers. This resulted in a large scale closing of many industries. The failure of both France and Russia to pay back their war loans meant that Britain in turn was not able to pay back the loans borrowed from America.

This in turn resulted in a dramatic increase in unemployment, going far beyond the ‘intractable million’.

In both of these situations, the Conservatives in the coalition were more than happy to sit back and let Lloyd George take the blame for these domestic problems. They began to notice his dwindling popularity and made no effort to halt it. The Conservatives were more than aware that they had a large enough amount of MP’s to have an overall majority in parliament, so for the time being they were content to sit back and allow Lloyd George to try and work Britain out of it’s economical mess.

After the war, the vast gap in Liberal and Conservative policy became overwhelmingly apparent. The pressing issue of the continuing nationalisation of the coal mines caused many problems for Lloyd George. As a liberal, George was in favour of public ownership of the mines. Knowing that it would be impossible to convince the Conservatives to carry on with the nationalisation, he ordered an independent commission into the matter. He told the trade unions that he would abide by whatever was decided by the commission.

Lloyd George assumed he had averted the matter by appointing a top judge, Mr. Justice Sankey. Lloyd George felt that Sankey was bound to want privatisation of the mines. When Sankey found in favour of continuing nationalisation, Lloyd George was in a compromising situation. He had already promised to carry out whatever Mr. Sankey decided, but he did not want to upset the Conservative majority. In the end, Lloyd George decided to do nothing. This greatly upset the trade unions, and resulted in a lasting distrust in him.

Lloyd George was also plagued by external factors he had no control over. An example of this is the change in leadership of the Conservative party. Bonar Law was an extremely influential figure within his party. He was good at persuading people to his point of view. His successor Austen Chamberlain lacked the finesse of Bonar Law. He spoke to his party about continuing the coalition only days after two coalition Conservative MPs had been defeated in by elections. This meant that at the time the Conservatives had very little patient with the coalition.

The growing disenchantment with Lloyd George was only elevated by his style of government. During the war, George formed a small war cabinet that had the power to make changes in any area of the government. After the war, this continued. Rather than consulting his cabinet on important matters, he preferred to consult a small group of advisors. This obviously upset the Conservative cabinet, as their influence over Lloyd George was falling.

Another source of discontent from the Conservatives toward Lloyd George was the so called ‘honours scandal’. After his split from Asquith and the original Liberal party, Lloyd George’s liberals needed a secure source of funding. To aid this, he allowed honours to be sold to wealthy people for a great deal of money. This was certainly not the first example of this happening, but it was the first example of it happening on such a wide scale. To further contribute to the problem, several less than savoury business bought themselves titles. The press caught hold of these affairs and made it commonly known, much to the Conservatives dismay.

Examples like these show clearly that Lloyd George contributed significantly to his own downfall, but it’s likely that the Conservative decline in support played a larger part in his fall from grace. While Lloyd George was popular with the public, he was an electoral asset, but as his popularity among the electorate decreased, so did his support from the Conservatives. Backbench Conservative MPs were particularly upset with continuing the coalition as it meant they had less promotion opportunities as a number of cabinet places had to be filled by Liberal MPs.

Even if Lloyd George’s popularity among the electorate had remained high, it is hard to imagine the Conservatives wanting to continue the coalition past 1922. The 1918 election had given the Conservatives the confidence they needed after having several years out of power. They realised they would have had a majority in Parliament without the Liberals in the coalition. While it is impossible to ignore Lloyd George’s shortcoming as Prime Minster in peace time, it is clear that Conservative disillusionment was the main cause of his downfall. 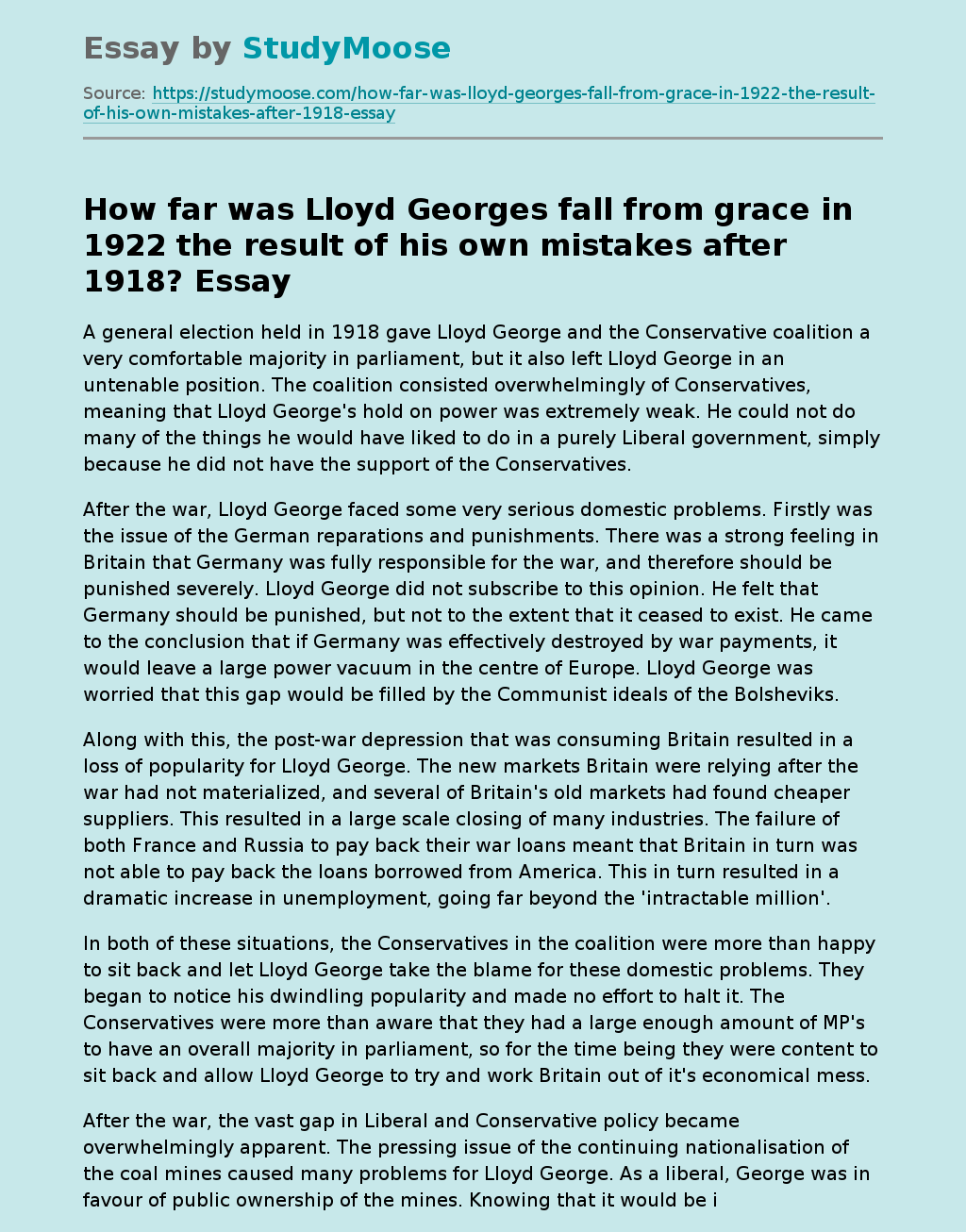