How far do the sources agree that the philosophy of separate spheres implied that women were inferior to men?

Source one is implying that men and women are different and it’s due to God’s decision. He made the decision to have them in separate spheres. What makes the difference bigger and more significant was that women weren’t educated unlike males and their manners were vastly different. From the source it says, “They are designed to move in separate spheres but occasionally to unite together, in order to soften each other.” This is suggesting that God wanted men and women to be different and have almost no interaction when at work and just away in general from the house.

Don't use plagiarized sources. Get your custom essay on
“ How far do the sources agree that the philosophy of separate spheres implied that women were inferior to men? ”
Get custom paper
NEW! smart matching with writer

They’re placed in two separate spheres and are isolated from each other when at work as men and women had very different jobs. When a woman managed to get a job it was highly likely to be something involved in domestic labour around the household of a person who was of a middle or upper-class status.

Men on the other hand had a much larger variety of jobs to work towards and have, as men were seen as much smarter and stronger than women.

This actual source was adapted from The Christian Library : Volume 8, published 1836. This source is strictly about what exactly a Christian believer has learnt and what they believe, as women weren’t educated they were never seen as intelligent people and were treated alost like animals in the household. Being told what to do by their husbands and in general men as if they were some sort of pet.

In source two, it’s explained that it’s impossible to assert the superiority of either man or woman.

They were dominant and should go to school for an education when women would learn how to cook and clean and basically learn how to serve their husbands for the future. “That man is a fool who is continually referring to the inferiority of the opposite sex. And the woman is worse who is always asserting either her equality or her superiority to the man.” Here it suggests that men believe in women being inferior to men and have grown up knowing that. This source was taken from Mary Tucker Magill, Women, or, Chronicles of the Late War. The text was written by a female and she says that men who say that women are inferior to men are ‘fools’. This woman has striked back and said that women aren’t inferior.

Mary Tucker Magill then says that the women who always say and are certain that women are either equal or superior to men. In her opinion women weren’t inferior to men but neither were they equal or superior. This then leads and gives evidence to the firt part of the texts where it says that men and women can’t be compared and that they can’t assert who is more superior. This third source is from John Milton Williams, Women Suffrage. In this text the writer identifies just how muc women do for their husbands and a huge majority of it is behind closed doors which leads to people not recognising. “Women has not to call the ballot-box, but she has a sphere of her own, of amazing responsibility and importance.”

Here, the writer has said that women have ‘amazing’ responsibility and importance, women in this text have been called out as having much larger roles than in the other two texts. “She is the divinely appointed guardian of the home. She should more fully realise that her position is the hoilest, most responsible, and queenlike assigned to mortals, and dismiss all ambition for anything higher, as there is nothing else here so high for mortals.” In this text, separate spheres isn’t clearly outlined in the text but you can see that women’s roles are distinctive in this text. The roles have been delegated and men aren’t mentioned suggesting that they aren’t capable of performing these tasks frequently like women or at all. This text also supports the ‘Angel of the House’ as it says “She is the divinely appointed guardian of the home.”

Divinely meaning supremely good or beautiful also helps to show that this text suggests that only women are capable of these tasks as they’re ‘queenlike’ in their own household. It’s almost like their house is their kingdom and they have ti keep it in perfect condition for the ‘King’ of the household for when he returns from work as the female stays at home. The three sources akk have unique opinions on the concept of separate spheres but source one and two are the easier texts to identify it from. Source one is written for Christian believers to read and it seems to be that they believe that God placed the difference between the two genders at the start with the chance that they could bring equality together but instead the differences had increased because of the people choosing to only educate men during that period of time.

There is a part in the text in which it explains that men and women do meet and that is through marriage and living in the same household, work is not mentioned. Source two is from a female’s point of view and she suggests that women and men can’t be chosen between for who is more superior due to the idea of separate spheres, because this has been implemented they can no longer be compared to as they go on separate paths (go into separate spheres) and play different roles in society implying that women aren’t inferior to men. The third source implies that women shouldn’t play or have the same roles as men as they have important jobs at home and it’s seen as a full time job for women. Again showing the separate spheres idea as women should only have one particular job and that’s to be at home.

How far do the sources agree that the philosophy of separate spheres implied that women were inferior to men?. (2016, May 08). Retrieved from https://studymoose.com/how-far-do-the-sources-agree-that-the-philosophy-of-separate-spheres-implied-that-women-were-inferior-to-men-essay 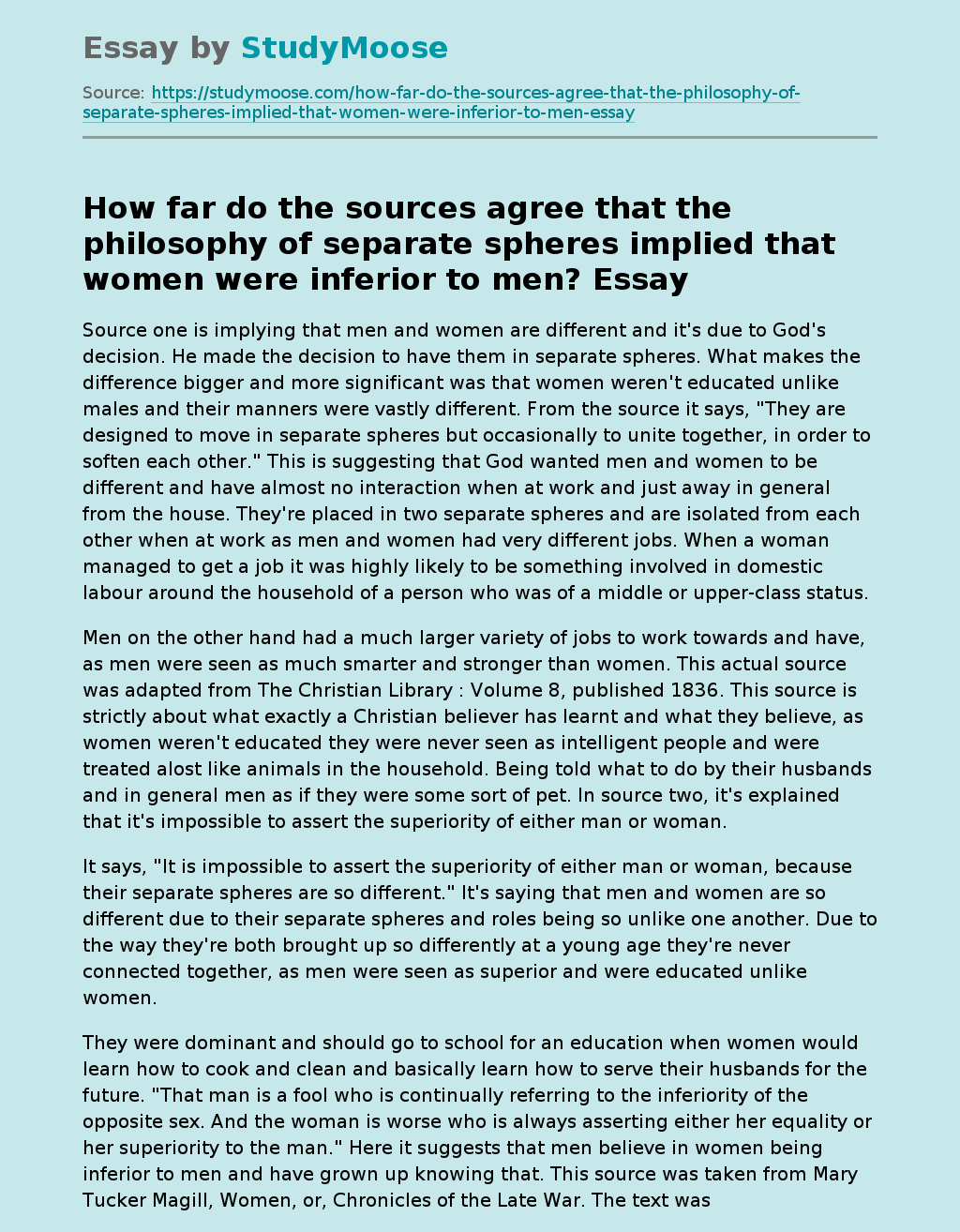