How far can Clym be regarded as a tragic Hero?

There is great talk among the Heath folk of Clym Yeobright and how well he has done for himself after moving away becoming a diamond merchant’s manager. We see people respect him and even though he has got an education people still admire him. He is seen as a hero figure, but has a tragic twist in his future on the Heath. When Clym returns he tells his Aunt and Eustacia of his plans to open a school and educate the Heath Folk, as he thinks them superstitious and foolish.

Turn in your highest-quality paper
Get a qualified writer to help you with
“ How far can Clym be regarded as a tragic Hero? ”
Get high-quality paper
NEW! AI matching with writer

“I have come to clean away these cobwebs” p219.

The audience that becoming a teacher is an unrealistic goal as the Heath Folk don’t want to be educated and have very strong views on it. He has no qualifications to become a teacher either which also works against him. Many of the folk consider it a disease to think too much. “Ah there’s too much of that sending to school… It only does harm” p125.

This again hints to the audience that his plans are doomed to fail. Clym is a very modern thinking man for the time in which this novel was written.

The industrial revolution was taking place at this time, something which Hardy had strong views on. Clym represents this as he is trying to evolve the Heath Folks thoughts and beliefs, even though they don’t agree with it. Clym also tries to read hundreds of books continuously and eventually becomes blind; this shows him to be an evangelist.

Even after prior warning from his aunt he continues to read and in short sacrifices himself. Clym’s character creates a paradox, he feels he belongs on the Heath and loves the Heath “I would rather live on these hills than anywhere else in the world” p220.

Yet he is trying to change ‘the place he loves’ to a more modern way of thinking and working. The real tragedy comes when Clym finds himself in love with Eustacia. From previous chapters we know Eustacia is out to make him love her, so she can use him to get to Paris. He genuinely loves Eustacia so they audience feel sympathy for him when they realise this. There relationship hints it will not work through out the story. This is shown by Clym and Eustacia’s different opinions on the Heath. He loves it she hates it.

Eustacia: “I am managing to live in a wilderness, but I cannot drink from a pond” The differing ambitions of Clym wanting to stay in Budmouth and the Heath and Eustacia being insistent on going to Paris. The break-up in the relationship between him and his mother also signifies a tragic out come and Eustacia seems to be turning Clym against Mrs Yeobright. The descriptions of the natural world also help signify foreboding about the relationship. ”

The next day was gloomy enough… “P229 The pathetic fallacy on P246 reflects the mood of how the relationship is going to end.”… an English June which are as wet and boisterous as November. The cold clouds hastened on … ” The way in which Clym meets Eustacia and asks her to marry him shows misfortune, as when she arrives an eclipse begins and they meet in darkness, reflecting the mood. “… a tawny stain grew into being on the verge: the eclipse had begun… “p230 The tragic hero image is very strong throughout they story even before Clym arrives at the Heath. This reflects Hardy’s view of Industrialisation and how he disapproves of it.

How far can Clym be regarded as a tragic Hero?. (2017, Aug 27). Retrieved from https://studymoose.com/how-far-can-clym-be-regarded-as-a-tragic-hero-essay 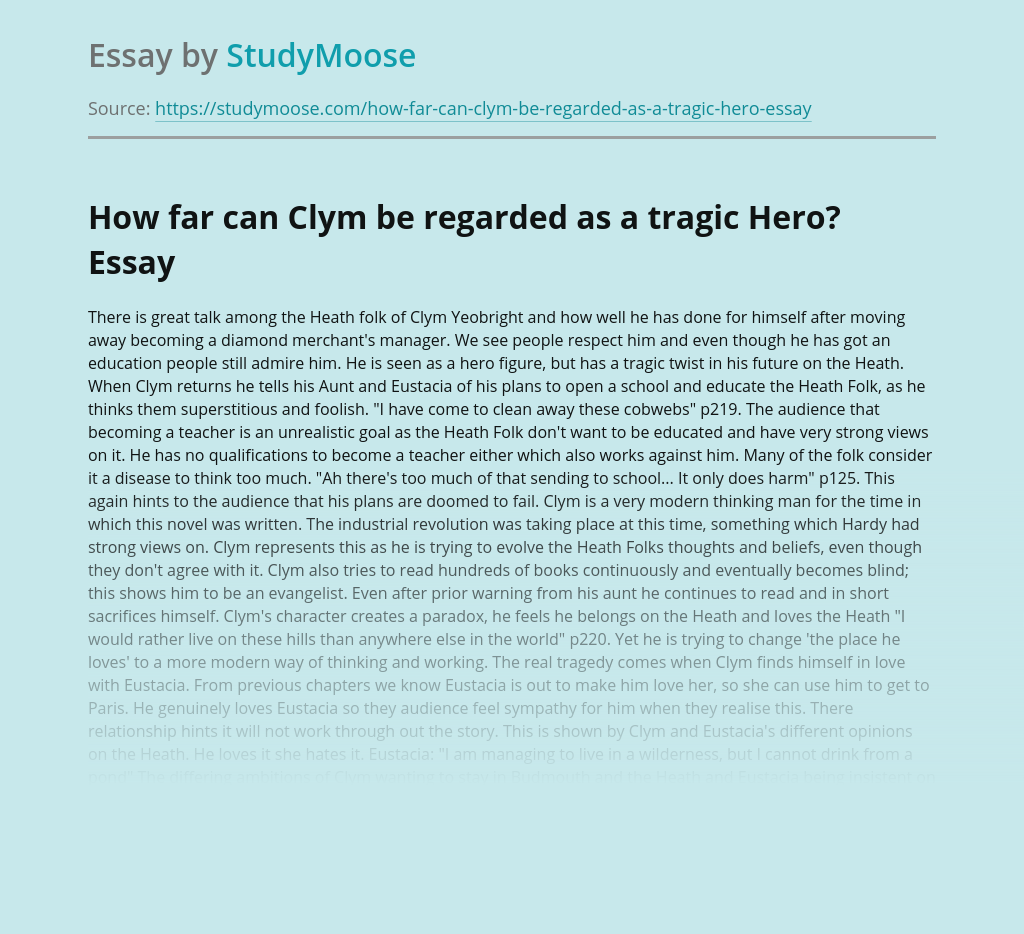 Turn in your highest-quality paper
Get a qualified writer to help you with
“ How far can Clym be regarded as a tragic Hero? ”
Get high-quality paper
Helping students since 2015
Stay Safe, Stay Original