Emily Elizabeth Dickinson was an American poet. She was born December 10, 1830 in Amherst, Massachusetts where she lived her entire life up until she died from Bright’s disease on May 15, 1886. Amherst was a small farming village that was made up four to five hundred puritan families. Education was important to the Dickinsons. Her grandfather had founded Amherst College in 1821. Her father was successful attorney and, at thirty-two became the treasurer of Amherst College. Her other Emily Norcross dedicated herself to her family and to the management of her home.

Don't use plagiarized sources. Get your custom essay on
“ How Emily Dickinson’s Life Influenced Her Poems? ”
Get custom paper
NEW! smart matching with writer

She had two siblings Lavinia and Austin who she was fairly close with. Austin shared her insights , taste in books, and fondness of nature.

Emily and Lavinia remained unmarried, stayed a at home, and outlived her family. They were very protective of each other and maintained all very tight. relationship all their life. Outside her family circle, Emily had very little friends, but they were very important to her she even called them her “estate’’.

She lived an overall reclusive life ,as she got older she became even more isolated after taking on the responsibility to caring for her sick mother. Her poems are influenced by the people in her life, religious views and personal experiences. Emily Dickinson’s secluded social life and her constant questioning of life, created an inner life full of imaginative creativity that she was able express through poems. Details from her personal history leads to a more deeper clearer understanding of her poems like, “I’m Nobody! Who are You?”, “Wild Nights, Wild Nights” and “After Great Pain a Formal Feeling Comes”.

Emily Dickinson lived a solitary life. She rarely left her home and spent most of her days in her room looking out a window. She never really felt as if she was part of the world. Howard Faulkner (2002) explains in his biography about Dickinson ,” Dickinson defined herself and her experience by exclusion, by what she was not, having rejected expansion, exploited suggestion (pg,1).”In her poem “I’m Nobody! Who are you” she expresses thoughts by describing her awareness of the quite lonely life she was living in such a sleepy village in Massachusetts. Everyone’s views, morals, religion and lifestyles were all the same. Her difference in opinions created her to remain anonymous almost .

The poem consists of two stanzas, first line in the poem begins with bold statement claiming that she is a nobody. She states that she does not self identify and has no entity. In the second line she asks the reader if they are nobodies and answers for the reader by stating “there’s a pair of us!”, then continues to address, “Don’t Tell! they’d advertise you know!”.She explains in that line not to tell people because if they know they’ll begin to talk. The second stanza describes being a somebody as “dreary” because it would be public.She compares a somebody to a frog and says that in the crowd of people they would be recognized and the name would be known. She also compares the people around to a bog and warns the reader of the consequences. Dickinson purposely adds an exclamation mark right after she states, “I’m nobody” which indicates excitement. This poem expresses her unique attitude towards fame, what she refers to as a somebody. She much rather be a no one as she thinks of anonymity as an advantage as you are not influenced by others and gain absolute privacy. She proudly declares her ordinariariness.

Dickinson presents her defence against why she preferred spiritual privacy. She refused to live a life as was expected of a women. She did not want to be a mom nor a wife, she just wanted to be her simple self. ‘“Renunciation is a piercing virtue,” wrote Emily Dickinson, and her life can be seen as a series of renunciations (pg. 1)’ states Howard Faulkner (2002) .She singled herself out from the other girls by resistance to convert to the conventional Christianity of the town thus showing how private and reserved she was .She was not famous during her lifetime. Her sister found her poems after Dickinson passed away, so they were not published in her lifetime. Although she did decide to live her life as an extrovert, she also did get to live normal human experiences like love which speaks on in another one of her poems.

The work analysis “Wild Nights,Wild Nights” by Joly, Ralph Robert (2002) states, “Emily Dickinson fell in love with a married clergyman, Charles Wadsworth, pastor of Arch Street Presbyterian Church in Philadelphia (pg 2).” Apart from being married he was also much older than her. Dickinson’s poem “Wild Nights, Wild Nights” has a ironic undertone that produces tension within the poem. The first line repeats the title, the second to fourth line states. “Were I with thee wild nights should be our luxury.” This meaning that if she was him their wild nights would be fun. The second stanza first two lines,“Futile the winds to a heart in port is an extended metaphor explaining that a heart that has found its course has settled down and cant be affected by winds or any other distractions. The last two lines of this stanza express, “Done with the compass, done with the chart” reinforces the idea that her heart is not going anywhere it won’t be using a compass or chart.

The last stanza communicates, “Rowing in Eden, Ah the sea! Might I but moor tonight, in thee”. Eden is the location Adam and Eve lived often seen as a paradise, thus claiming that she is rowing in happiness and at the end expressing her wish to be with her lover. This poem overall speaks of her strong desire to be with this man she claims to be in love with presumably being Wadsworth. With impassioned tones, she explains how happy she would be if she were with him in a magical paradise. This shows her awareness that this love is nothing more than an illusion or fantasy, not only because he is married but also because her culture would only shame them. However she can not help the way she feels. She will continue loving him despite the situation which is why she clarifies that her love will not move or go anywhere. Dickinson capitalizes certain key words in the poem that just right out like Compass, Heart and Eden to emphasis each idea.

The poem “After Great Pain a Formal feeling comes” highlights the biggest struggles with the loss she has faced throughout her life. She describes the many stages person who has experienced great pain goes through. Emily lost her father and a year after his death, her mother had a stroke that left her paralyzed. Dickinson took care of her mother for the next seven years up until her lasts day. The poem two lines of the first stanza “After great pain a formal feeling comes, the nerves sit ceremonious like tombs” indicates complete numbness. The second and third line, “The stiff Heart questions was it is he that bore? And yesterday of centuries before?’’indicates the feeling of emptiness followed by the loss of the sense of time.She captures the formal feeling of a funeral ceremony which is is the first stage , where the loss is the most painful. The second stanza first lines, “ The feet, mechanical, go round, a wooden way” uses symbolism.

The feet represent movement or going about daily routines then comes the weight of depression where she is not able to go on about her day. The “wooden way” evokes a wooden casket and “Like a stone” recalls a headstone. In the final stanza she presents a poetic comparison of freezing to death in the concluding line,”This is the hour of lead, remembered if outlived, as freezing persons recollect the snow, first chill, then stupor then the letting go”. After the great pain comes numbness of senses and the person begins to question whether they have ever endured such pain and whether it was really so recent. The last stanza describes the action of releasing of agon, and almost a sense of relief and acceptance by letting go of her mother whos paralyzation also created a sense of suffering for Dickinson when seeing her in such states. This could also be reflected in the line where she questions if she had suffered before, as she had. Her letting go was being able to move on from two deaths as she outlived both parents. This entire poem describes her fragile emotional balance that settles heavily over her as a survivor of recent trauma and profound grief.

All three poems alongside a little background information can be understood more clearly. One is able to grasp the true purpose and meaning of each poem. It is interesting to see what life experiences triggered such creativity and deep emotions. “I’m Nobody! Who Are You?” for example can be interpreted differently if you do not realize that the author actually preferred loneliness. The poem otherwise might seem a little confusing and sad when in reality she is referring to fame and popularity as a negative thing. Similarly, “Wild Nights, Wild Nights”could hold a different meaning if not being the detail that she was once in love with a married man. “After Great Pain A Formal Feeling Comes” expresses her feelings of suffering and loss.

Howard Faulkner explains (2002) ,” Dickinson life was kinesthetic; she recorded the impressions of experience on her nerves and on her soul” (pg.1). Dickinson used her own experiences and thoughts to create her poems.Her writing interpreted great capacity to self observation. She even suggested that you do not need to go out and live foolishly to be creative, wise or to gain experience. She proves this through her many poems that are influenced by and contain a significant parts in her life .This explains that each poem has a specific meaning or theme, the one she intended the reader to discern. Dickinson’s poem are marked by her family and personal views. Emily Dickinson’s own life provides the reader with a more deeper and clearer understanding of her poems. 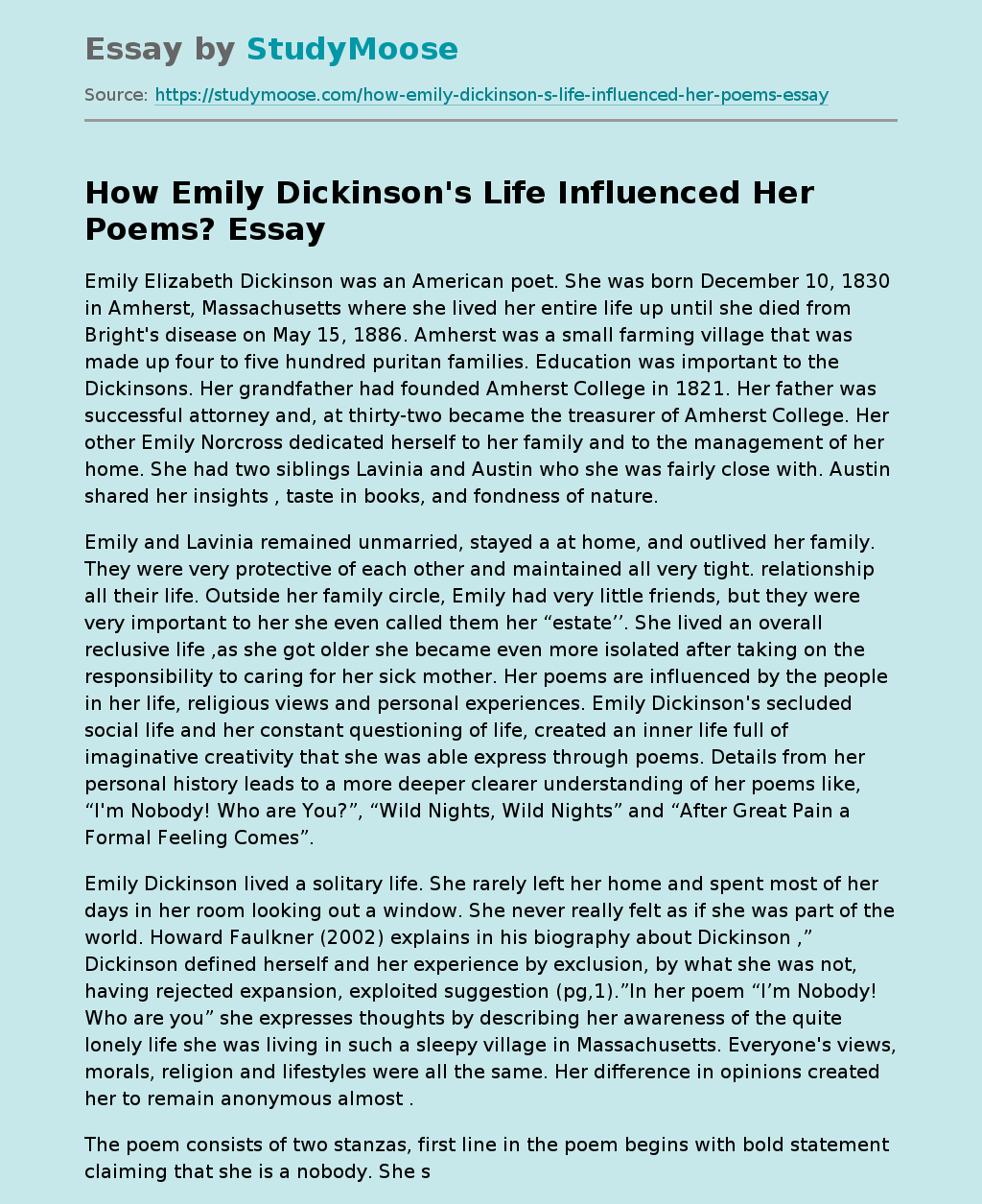