How effective are backbench MPs?

‘How effective are backbench MPs?’ 40 marks Backbench MPs are critical for UK democracy. They allow for high standard scrutiny of the government which holds them accountable for their actions to the people. They help in representing the electorate. However there are some circumstances in which backbench MPs have little control, for example an elective dictatorship or because of the UK party system which is enforced by party whips. Firstly back bench MPs are a good way of promoting presentation in terms of their constituency boundary as they have been voted in by their electorate and so therefore should have a sound understanding of what the people need and want.

Don't use plagiarized sources.
Get Your Custom Essay on How effective are backbench MPs? Just from $13,9/Page

However the majority of MPs are white males between their 40s and 50s. Out of 650 House of Common MPs, only 147 of them are female, which is disproportionate to the number of females in the UK. Also less than 25% of MPs are from a multicultural background so it cannot be 100% representative. Secondly backbench MPs allow the current government to be made accountable to the electorate.

Backbenchers can take part in scrutinising opposition, or even their own parties, during events such as the Prime Minister’s Question Time, where, for an allocated time, the PM is asked questions concerning anything. Select committees can also be used to scrutinise. For example the head of the Public Bills committee is always headed by a member of the opposition, currently Margaret Hodge. This is to ensure that they are effective and non-corrupted.

Although MPs have the power to dissolve the current government, through a vote of no confidence (last one in 1979), MPs that standalone against their party by having controversial or independent thoughts on an issue, then they are brought into line by party whips which could result in having an MP who does not represent you adequately. It shows that MPs achieve more together. Due to first past the post leading to majority governments, except for 2010 general election, it is very difficult to oppose bills, this led to something Lord Hailsham coined as ‘elective dictatorship’ meaning that when a government has a majority in the House of Commons, it can pass bills with minimal opposition for its entire term in office. This was the case for Labour in 1997 when they won a landslide majority of 418 seats in the House of Commons. Another reason why backbenchers are effective is through their use of debates, as it allows them to express their opinion and show their constituency, as well as their party where they stand on certain issues, like the EU, for example. However there are limits to their effectiveness. Debates have to be requested, and the chances are that the current government will only pick topics that they feel comfortable discussing or ones that won’t embarrass them too much.

This means that controversial issues everyone would want to know about may not be discussed, for example the Iraq war. Backbench MPs also have a lot less media coverage than high profile, frontbenchers. This allows the frontbenchers to make their views more known and make them a more of a familiar face during current issues. An example of this would be having frontbenchers on the BBC question time every Thursday. However backbenchers are still members of parliament, and because parliament is sovereign and the supreme law making authority, they are less pressured to ‘tow the party line’ and therefore can stand more for their constituencies than the party they represent. To conclude, although MPs have a lot of constraints on their power and what they can do, through scrutiny and select committees, there are still opportunities in which backbenchers can become a lot more effective. Whether this is through fully representing their electorate, to embracing new technologies and using social media to communicate with their public.

How effective are backbench MPs?. (2016, Apr 07). Retrieved from https://studymoose.com/how-effective-are-backbench-mps-essay 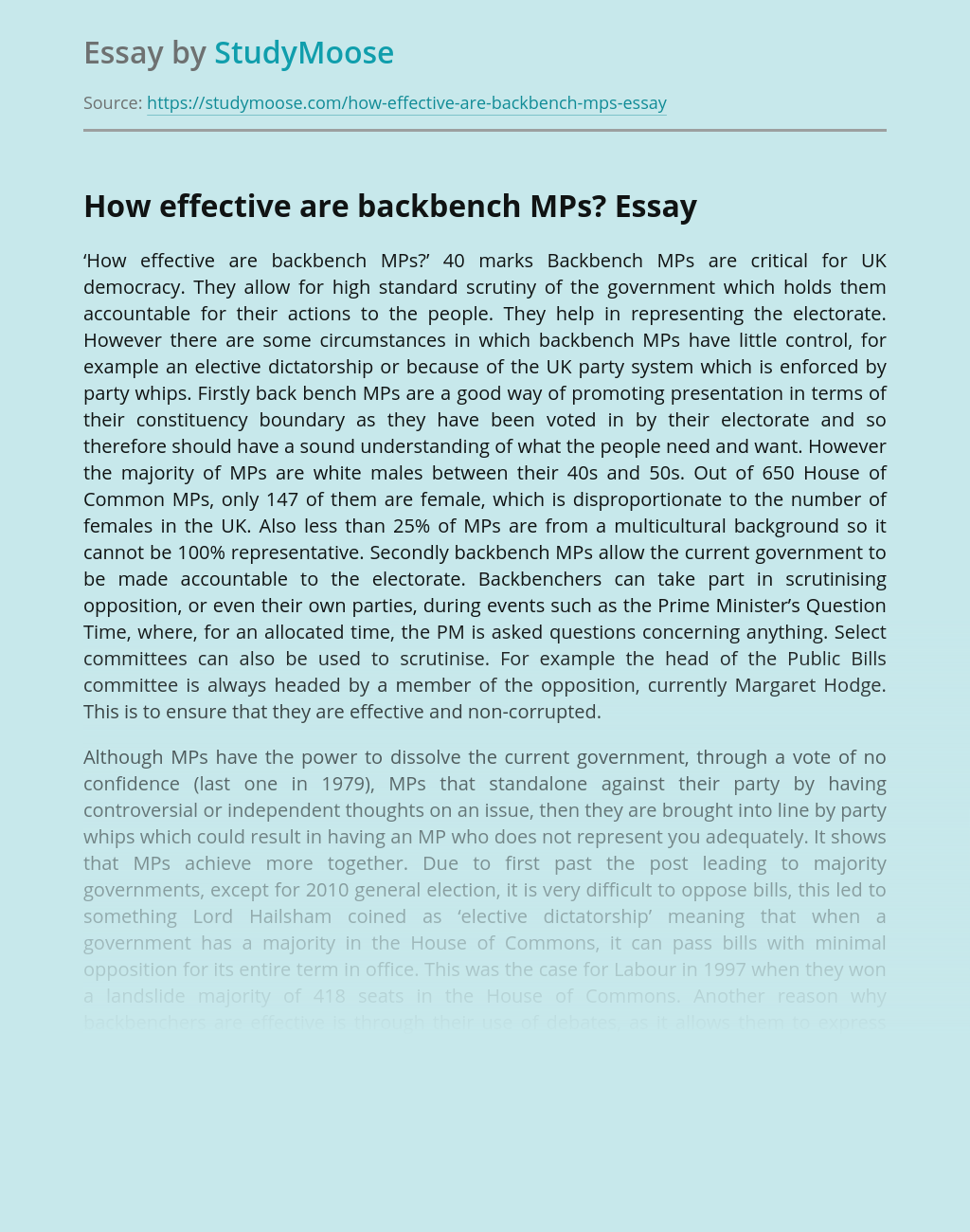 Brooks discussed the differences between the two groups. He described how “Red America” was made up of farmers and rural communities, while “Blue America” consisted of big cities with many stores and businesses. As Brooks looked at the red and blue sections of the electoral map, he was interested in the reasons behind the voting...

There are many reasons or purposes behind pursuing higher education, but these may change depending on each individual student. However many distinct reasons there may be, the majority of them can be grouped into five broad categories. The first of these categories relates to money, the second is the transmission of culture and history, the...

By May 2009, Nigeria’s nascent democracy should have been a decade. Thus, the thrust of this paper is an in depth analysis of the possibility of sustaining democratic values beyond any sudden reversal. The. paper however, takes a cursory look at the daunting challenges ahead and infers that unless the government increases social expenditure and...