How Does You Race, Religion, Nationality, Gender and Culture Define You?

If we were stripped of our day-to-day activities, would you just wander around aimlessly, or would you default to the things that have been ingrained into our brains since we were little? What defines you? It could be your job, the fact that you are an A star student, a parent, or maybe it could be the things you love like your car or your impressive record collection. The problem is, what happens when you lose it? Lose your job, your kids grow up and move out, then what? When you define who you are with what you do for a living or the objects you own, it’s temporary.

Don't use plagiarized sources. Get your custom essay on
“ How Does You Race, Religion, Nationality, Gender and Culture Define You? ”
Get custom paper
NEW! smart matching with writer

For me, my race, religion, nationality, gender and culture define me. No one can tell you that you are not something you are; that is to say, the things that define who we are cannot simply be taken away because we do not meet their expectations. People’s expectations say more about them than it does you.

I am Chinese. But I am not from China. Skin colour is only skin deep. The genes for skin colour have nothing to do with athletic ability, musical talent or forms of intelligence. Unfortunately in Malaysia today, almost everything is race-based, which makes me feel unhappy. Race isn’t biological, but racism is still real. Race is a powerful social idea that gives people different access to opportunities and resources. The government and social institutions in Malaysia have created advantages that disproportionately channel wealth, power and resources to ‘bumiputras’, the Malay and indigenous people, which make up roughly 61.

4 percent of the total population.

For instance, in my cousin’s school there are quotas on how many Malay, Chinese and Indian students are to become prefects. The idea shocked and angered me further when I found out that out of the twenty positions, only three Chinese students are allowed to become prefects, whereas twelve positions are reserved for Malay students and the remaining five for Indians. She goes to a government school, undoubtedly. I feel grateful because I study in an international school, which does not follow such
principles. Race-based quotas, a highly politicized and controversial issue, exists in university admissions also.

I am also a Buddhist. But not a strict one. My immediate family does not have a prayer room or even an altar. Usually, Buddhists pray to specific gods or deities and give offerings as a daily routine in hopes of getting what they hope for, or sometimes doing something in return. Some Buddhists do not eat beef because they pray to the Goddess of Mercy, who regards the bull as a sacred animal.

To my family and I, Buddhism is not about what you put into your mouth, but rather what comes from your mind and heart. As far as I know, a person who claims to be a Buddhist and does not consume beef can also indulge in unnecessary many other things, most of which are not abiding to the true teachings of Buddhism. We do, occasionally, visit the temple for blessings. We go to the temple in Ipoh, where my aunty and cousins live. The temple is very smoky but we endure it and kneel down in front of the idols of the gods and deities to pray, asking usually for good results, to be in the pink of health and generally good wealth. After that, we stick a few joss sticks into a metal bowl. Sometimes, my parents, with the assistance of a temple monk will use a slipper to hit a charm with the name of whomever they think might be preventing business deals to fall through or cursing them, in some way. Sometimes I do not believe in such things actually working, but I think my parents do it because it might somehow alter their luck. My father is, or rather was, a Christian. He went to church every Sunday when he was younger. His sister married a priest and they are very conservative. I am lucky in the sense that my father does not take religion to the extent that we are forbidden to say phrases such as ‘Oh my god’ or ‘God knows’, like his sister. I am very certain that her own children say that. This is not something she can control because we live in a different age now and the world is constantly changing. I think she should adapt to the current culture, or risk being seen as old-fashioned and not open minded. Back to my father, now he considers himself a Buddhist. He no longer goes to church and goes to the temple, with the rest of my family. I do pray, but rarely, sometimes when I am in desperate need of something, although not to any
particular god, in hopes of the god wherever he or she may be, hearing my prayers and fulfilling them. I believe in karma too. When something bad happens, I tell myself that it happens for a reason. Maybe because something good is on its way, or because the Supreme Being is punishing me for something I did previously. I think of it as a balance of nature, because nobody can have it all. I have been to church when I was younger, not because my parents made me but because my friends went. It was quite fun while it lasted. Many activities were conducted during Sunday school, as they called it. Such activities were singing, playing games, drawing and reciting bible verses. Admittedly, I sometimes believe in Greek gods. I find it ‘cool’ because they are special. Maybe I find them so interesting because these beings are publicized and are often said to have mythical powers and go on quests and such in the movies and books. All in all, I think that I might be still finding myself in the religion department. But for now, I’ll still consider myself a Buddhist.

Seeing as my name is Samantha, I am unmistakably female. Some people may call me girly or feminine but I think I can be tough if I want to. I am not generally a loud person, unlike my close friends. They are treated like boys by other boys. I’m not saying that I don’t accept that, but I think I prefer being treated like a girl. I do not mind gender stereotypes because for the most part, they are true. Gender is defined for us at birth, but how much you become like the gender is down to how much you choose to follow it. I am strongly against anti-gay and anti-homosexual beliefs though. I trust that many people in my generation accept that culture and do not discriminate lesbian, gay, bisexual and transgender (LGBT) individuals. There was a recent case of a Muslim gay man in Malaysia says he fears for his safety after speaking about his sexuality in an internet video that attracted online death threats and accusations by religious authorities that he is insulting Islam. I get angry after hearing news of the government acting irrationally towards these individuals. However, the government insists that this comes under the Islamic Law and such acts are a disgrace to their religion. I, myself would like to participate in rallies against anti-LGBT activists next time. Being a Malaysian does not affect me in any way. I do sometimes feel embarrassed by what our country has done in the past. Petty issues are often made big and raise eyebrows around the world. I do not want our country to be famous for its many controversies. Politics is also another factor because many politicians have become corrupt and greedy for money and power. They abuse their power for their own benefit and end up in scandals, which take even more money to cover up. Last but not least, culture does define me. I, as a Chinese celebrate Chinese New Year with my family every year. It is our tradition to pour and offer tea to our elders. We have yearly gatherings in my relatives’ houses. We gamble and eat, like most families do during that time of the year. Sad to say, our culture is heavily influenced by the Western society. This happens because of our exposure to their culture through television, radio and movies. Fads are spread quickly with the access of the Internet. For some reason, the Americans will always be held with a higher regard than the rest of the world. They consider themselves a global super power and can control everything. Our way of speaking, style of dressing and thinking has become more like the westerners’. In a way, I feel disappointed with the loss of a part of our culture but this change is inevitable. In conclusion, I think that as we grow older, we learn and tend to recognize what defines us more. Our priorities change and, in tandem we change ourselves. We must not be quick to judge because looks are not everything. I think our experiences also play a role in defining who we are. We remember the good as well as the bad side of things, so every day is one part of our long journey to finding ourselves.

How Does You Race, Religion, Nationality, Gender and Culture Define You?. (2016, Apr 06). Retrieved from http://studymoose.com/how-does-you-race-religion-nationality-gender-and-culture-define-you-essay 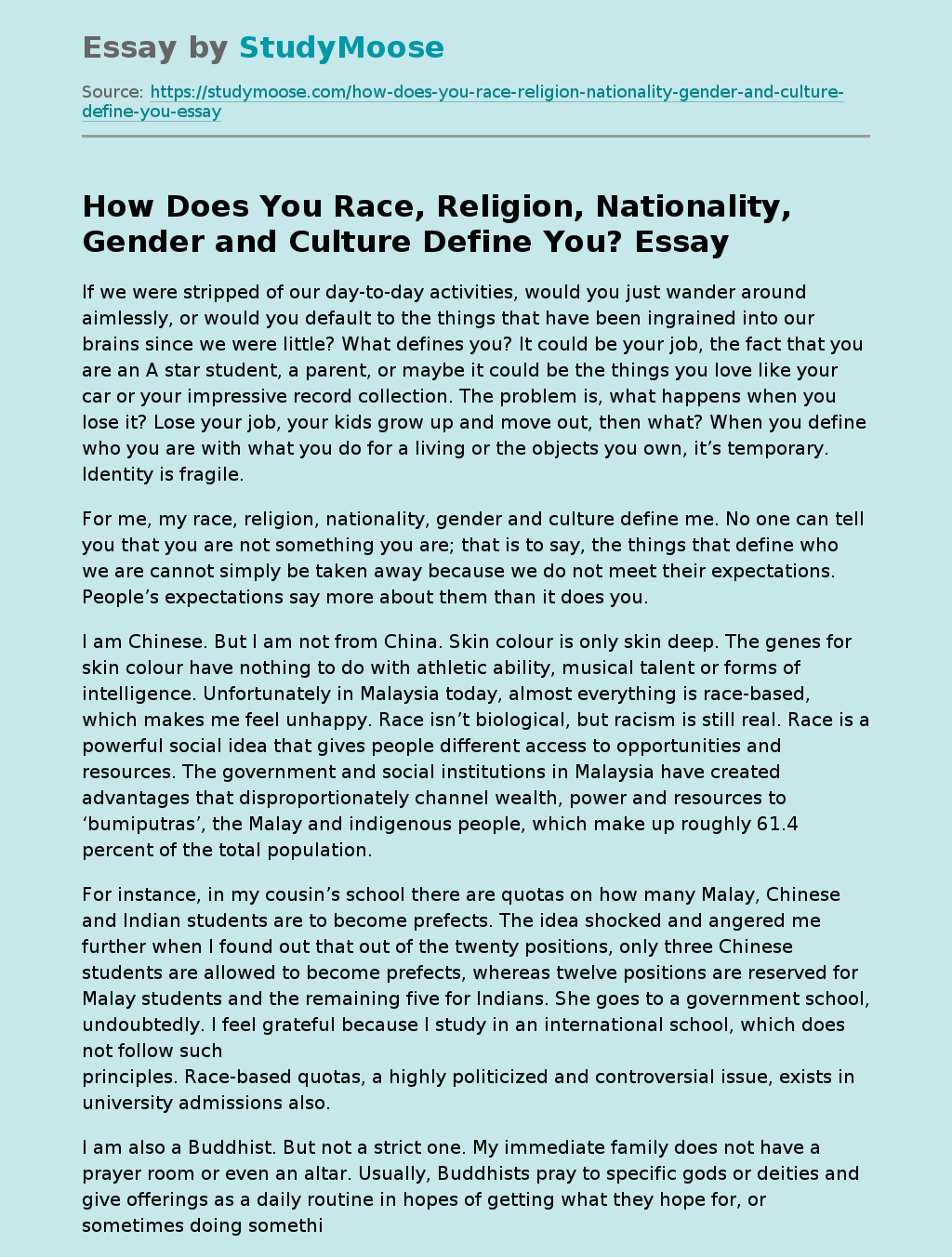