How Does the Film “the Breakfast Club” (1985) Perpetuate Teen Stereotypes?

“The Breakfast Club” shows the typical stereotypes of before, specially the 80s. The snob girl that thinks she shouldn’t be there, the popular sports boy, the rebel that is not understood, the nerd that doesn’t want to be in trouble, the outcast that is ignored, and the teacher that thinks to highly of themselves and thinks that teenager equals problem.

In the 80s “The Breakfast Club” became really popular. This could be because the teenagers that saw it found themselves identified with the characters.

Don't use plagiarized sources. Get your custom essay on
“ How Does the Film “the Breakfast Club” (1985) Perpetuate Teen Stereotypes? ”
Get custom paper
NEW! smart matching with writer

It also made adults and teenagers see from the outside what was happening, and that stereotypes did exist.

Nowadays these stereotypes still exist in a way, but not as marked as before. Now teenagers could communicate with other people from different groups, not like in the film, were the “popular” girl doesn’t think the rebel, nerd or outcast should be with her there. She thinks to highly of herself. Internet has also helped people not label others as much.

Now people sometimes meet though internet, and this makes the first impression useless in what it refers to appearance. Teenagers get to know each other more, so they don’t fall for the stereotypical appearance of others. I find that what has also changed between the 80s and now, is that studies have become more important.

It is true that we still think a lot about our appearance, clothes, etc. but the society has made us more aware of the fact that without studies we maybe wouldn’t be able to go far.

More information on TV has also influenced, now people are informed better on what’s happening around the world. Teenagers now know there is more apart from school and friends, and are more worried about their future and world-wide problems, than to belong to a group. We are more understanding on what is around us, we are less narrow minded. Know we know there are people the same as us, so we give more opportunities.

However, are stereotypes still giving problems? Many adults stereotype teenagers as being lazy, unmotivated, and undetermined individuals. Loud, obnoxious, rebellious, out of control, and up to no good… Many people in different generations sincerely believe that all teenagers are guaranteed trouble no matter where they are. I am not arguing that teenagers like that don’t exist, because there are plenty of them out there, but it is bothering that one type of teenager has been able to spoil the image of all the others. Things like long or coloured hair, black clothes, heavy make-up, ect. Create a wrong idea of the person.

Things like saying that a teenager is bad just because they are trouble makers is wrong, someone could be just having fun and act serious somewhere else. People, specially teachers and parents, think that all teenagers are always ready for the battle, that they are not capable of reasoning, listening, or saying something interesting. In an external point of view, I personally find teenagers more interesting than any other group of ages. We are in the middle of children and adults, our view of the both is split into two and our exposure between them is different, this creates a wider point of view. Therefore, a different opinion.

In conclusion, Stereotypes have changed throughout the years, people don’t label as much. However, it’s still there, and is still harmful.

How Does the Film “the Breakfast Club” (1985) Perpetuate Teen Stereotypes?. (2017, Apr 02). Retrieved from https://studymoose.com/how-does-the-film-the-breakfast-club-1985-perpetuate-teen-stereotypes-essay 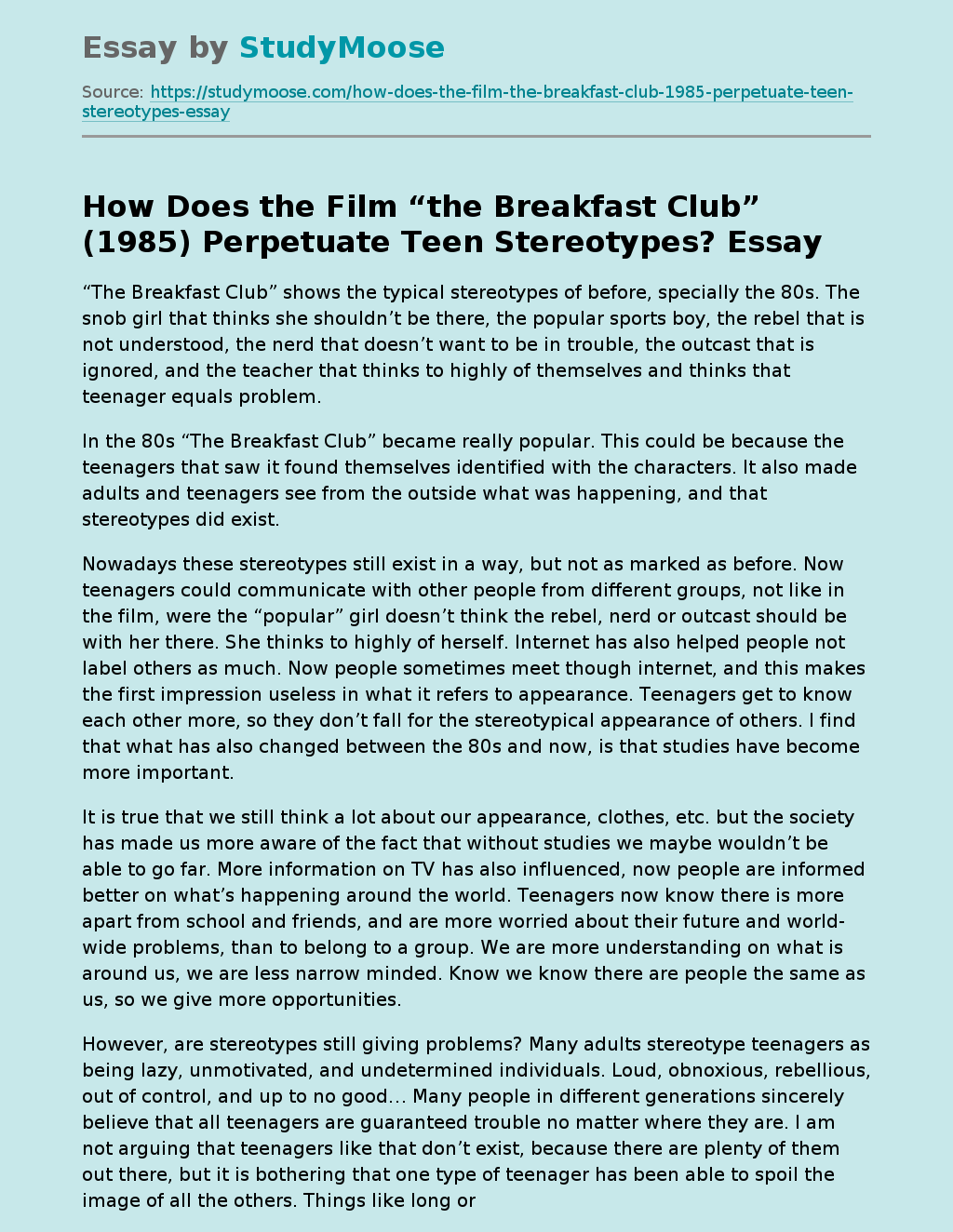