How does technology effects us?

Look back at our day so far, how many people have we seen ignoring the world around them, not paying attention to the cashier or not absorbing the information in class? In Alina Tugend essay, multitasking can make you lose…Um… focus, she reported that multitasking may seem like it saves people time however, it makes people less efficient. It may be true that technology provides us with time-saving devices like push to cars, cell-phones that consist of 4G internet access, and washing machines with built in dyers; however most of us still complain about not having enough time.

Don't use plagiarized sources. Get your custom essay on
“ How does technology effects us? ”
Get custom paper
NEW! smart matching with writer

Like everything else in the world, technology has its pros and cons; it affects peoples’ concentration, writing skills, and what we consider reality; but how exactly is technology affecting the way we think, read, write and live? The development of technology has greatly improved my life but diminished it at the same time. It brought me closer to my family in Trinidad after my father passed, three years ago.

Logging onto Facebook and Instagram, receiving phone calls, text messages, video chatting kept me fasten into their world 24/7. Although we built such a strong relationship within those years, I was totally disconnecting from what was going on around me and my immediate family. I came to this realization when my little sister’s fifth birthday nearly past without me noticing.

Tugend, who wrote, Multitasking Can Make You Lose…Um…Focus, explained that multitasking actually delays our process rather than accelerating it. We often believe that doing multiple assignments would be effortless but it causes an abundance of stress. Research has proven that the human mind can only focus “on one or two items at a time” (716). I believe multitasking all depends on the two tasks that is being combined, for example: listening to music while doing math homework seems to me as a good mixture because the music is helping the worker better cope with the math problems. On the other hand, driving while text messaging can be a distraction because, they activities require full focus and concentration. Focus is very important when it comes to multitasking but also significant when using the internet to search long pieces of writing.

In Nicholas Carr’s essay, Is Google Making Us Stupid, he states, “research that once required days in the stacks or periodical room of libraries can now be done in minutes” (732). The use of technology is very beneficial and time efficient, however does the pros overcome the cons? Carr also discusses the fight against technology to stay focus; since now a day, “…three or four paragraphs is too much to absorb” (733). I reckoned that we must realize that reading doesn’t come natural like speech does. We must keep training ourselves to read no matter if it’s in a paperback book or an online blogging site without distractions. Many teachers and parents believe most teenagers are distracted by text messaging (texting). A variety of teachers dispraise texting because most students use text slag and abbreviation in professional writings, and students do not become conscious of the fact. Also there are parent who think texting negatively impact their children communication skills. On the other hand, Michaela Cullington, the writing of Does Texting Affect Writing, would most likely disagree.

Cullington believes that texting motivate student to write and also it is “practice in specific writing skills, and an opportunity to gain confidence in their writing” (89-90). After her research she was convince that texting is not interfering in students’ writing skills. I caught myself plenty of times using text slag when writing a paper to turn into class. Fortunately, I have taught myself to text in complete sentence and use correct abbreviation so it wouldn’t interfere with my writing skills. If text messaging doesn’t interfere than maybe games can. Sam Anderson would consider games like Angry Birds or Fruit Ninja as “Hyperaddictive stupid games,” because it’s a simple thing that becomes addictive and eventually form into a distraction. In Anderson essay, Just One More Game…: Angry Birds, Farmville, and Other Hyperaddictive Stupid Games, he illustrates that stupid games were designed to pop up in other occasions. For example, you are doing calculus homework and you receive a text message and suddenly it’s an hour later and you are launching another bird.

People are so attached to their phones because game-studies scholars specially design games to be so addictive. Especially now that people can a play game anywhere at the palms of their hands. Using the same addicting technology can probably “help solve real world problems like obesity, education and government abuse” (67). Living in a generation where technology affect everything around us including our communication, multitasking, concentration, writing skills, and our view of reality. I believe that technology was made to make our lives easier sadly, it can bring upon more difficulties in our life. Technology will always be prevailing and it is our responsibility to work with it. The majority of people today have become so dependent on technology that they aren’t be able to function a full day without it. I believe it is up to the people of America to decide whether we have taken advantage of technology, or has technology taken advantage of us, without us being aware of it.

How does technology effects us?. (2016, Mar 04). Retrieved from http://studymoose.com/how-does-technology-effects-us-essay 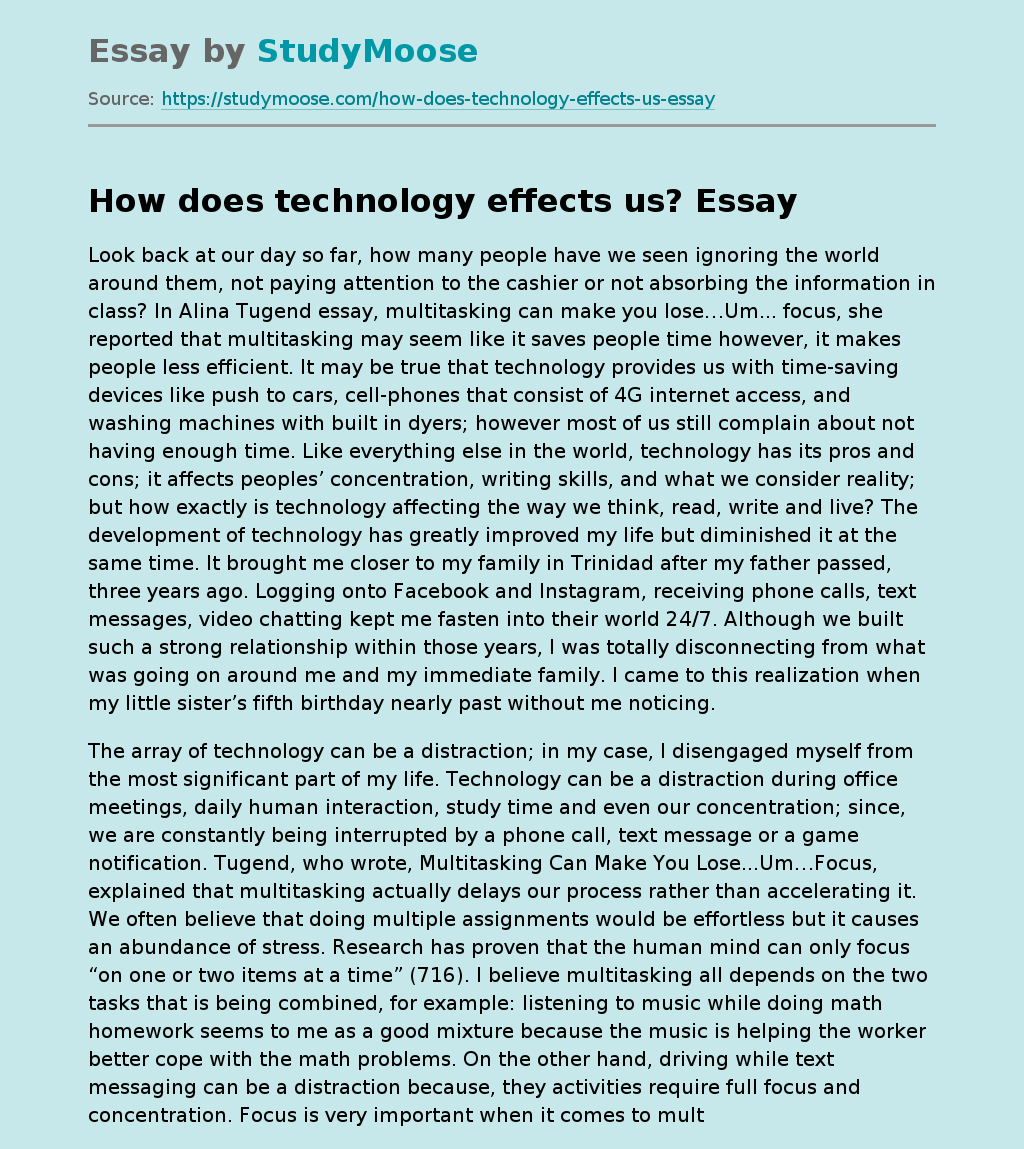