How does Shakespeare compare and contrast the characters of Antonio and Shylock in the trial scene?

Shakespeare portrays the characters Shylock and Antonio in the trial scene to be victims of the trial scene. In my opinion, Shylock is the main victim as he is discriminated for following a different religion to everyone else in the court. Being a Jew meant that the other people in the court were racist against Shylock meaning that they treated him unfairly in comparison to Antonio; who was helped in every way so that he could win the trial and Shylock would not get his pound of flesh.

+84 relevant experts are online
Hire writer
Don't use plagiarized sources. Get your custom essay on
“ How does Shakespeare compare and contrast the characters of Antonio and Shylock in the trial scene? ”
Get custom paper
NEW! smart matching with writer

Shakespeare uses language to create an impression of what the characters are like for the audience so they consider what the situation is like for both of the characters.

Continuing with language, Shakespeare uses violent, strong and hateful language when Shylock is speaking to show that he is very strong willed and confident when claiming something that is his own. Shakespeare also focuses mainly on law when Shylock is speaking to show that Shylock depends on the law to make his case for his pound of flesh. However Shakespeare uses softer, calm and passive language when Antonio is speaking to get across to the reader that Antonio is very resigned and defeatist in the trial; it makes him seem resigned and that he doesn’t have any hope anymore. Shakespeare doesn’t so much focus on the law when Antonio is speaking but of the good will of Shylock and if he will show mercy. In spite of this, Shylock does not show mercy and tries to convince the duke to grant him his pound of flesh. Shakespeare uses comparison between Christians and Shylock as a way of convincing the duke. In line 89 – 103 Shylock talks about the slaves that the duke and many other Christians have. ‘You have among you many a purchased slaves’ is a line Shakespeare uses when Shylock is talking.

These slaves that the duke and other Christians have purchased belong to them and so they can do what they please with them. This is the same with Shylock’s pound of flesh; it belongs to him and therefore he can do whatever he wants with it whether he chooses to cut it off or not. On the other hand Antonio does not fight for his case as hard as Shylock does. In lines 114 – 118 Shakespeare writes in such a way that the audience thinks that Antonio has given up. ‘Meetest for death; the weakest kind of fruit’ this means that Antonio is prepared for death and that he calls himself the weakest of all Christians. These lines simply explain that Antonio is weak and he has no hope of living. Shakespeare uses words like ‘tainted, drops earliest and weakest’ to make the audience feel sorry for Antonio because there is nothing a weak Christian could do in his situation. In lines 117 and 118 Antonio says to Bassanio that it is better that you live so you can remember me. Shakespeare does this to show the audience that he is, in a way, saying goodbye to his friend. Following on from this, Antonio has many people in the court who are friends of his so they stay bias towards him. Unlike Shylock who has many enemies in the court who detest him for mainly his religion but also for the bond he has over Antonio. In lines 128 – 138 Shakespeare uses harsh language to depict Gratiano to have a monumental hatred over Shylock.

Line 128 ‘governed a wolf, who – hanged for human slaughter’, Shakespeare makes the audience realise that Gratiano sees Shylock as no more than a vile wolf who should be hanged for the bond he has over Antonio. Throughout the whole of lines 128 – 138 Gratiano expresses his hatred by comparing Shylock to ‘inexecrable dog’ and wolves to show the audience that he thinks Shylock should be treated as these animals are treated. Antonio too is treated poorly, but instead of the court treating him unfairly, Shylock treats him unfairly. Too often is Antonio victimised by Shylock because Shylock feels he has a hold over Antonio because of the bond he agreed to. In line 139 Shakespeare makes the audience feel sorry for Antonio by making the other characters in the court refer to him as ‘a pound of flesh’ and a ‘bond’. This gives the impression that Shylock has control over Antonio and that Antonio is only there for so that Shylock can take his pound of flesh. Shakespeare makes the audience feel that Shylock does not see him as an ordinary Christian but he sees him as his own bond and his own pound of flesh that is rightfully his by law.

However, unlike Shylock, Portia doesn’t use law when she first arrives at the court; instead she pleas for mercy from Shylock. In lines 180 – 201 Portia presents her speech about how Shylock should be merciful towards Antonio as he is offering to pay more than his original price of ducats. But also Portia says that he should try to be a good Jew and allow mercy on Antonio so that his life will not be lost. Shakespeare gives Portia this thoughtful speech to show the audience how desperately she is trying to find a way to keep Antonio alive. Shakespeare also uses words like ‘heaven’ and ‘god’ to show that Shylock’s religion has a lot to do with the mercy he should give Antonio. Unfortunately Shylock does not care for mercy, love or friendship; instead the most important things to Shylock are his money and possessions. Shylock is very different to Antonio and Bassanio as they care about each other through love and friendship. In lines 260 – 277 Antonio says goodbye to Bassanio his dear friend; Shakespeare uses language to prove Antonio and Bassanio’s friendship. ‘Give me your hand, Bassanio. Fare you well’, Shakespeare gives the affect that Antonio is talking soft and calm to his friend so that he can say goodbye properly. ‘To let the wretched man outline his wealth’, Antonio says this to Bassanio to say that Shylock is an evil man who has favoured wealth and possession over an innocent life.

Luckily Antonio did not have to say goodbye to Bassanio as Portia found a pothole in the bond meaning that Shylock was not allowed to take a Christian citizen’s blood or take more or less than the pound of flesh; so Shylock said that he would not take the flesh and leave. In lines 343 – 359 Portia is not merciful to Shylock to let him walk free as he was not merciful to Antonio even though he had many chances to be. Shakespeare does this to teach a lesson so that the audience knows that they should treat others how they would like to be treated. In this case Shylock should have been merciful so that the duke and Portia could be merciful back. Ultimately I think both characters were victimised in the trial scene but for different reasons. Shylock was victimised for being a different religion to those in the court whereas Antonio was victimised just for being hated by Shylock. I think the main problem is racism between the two religions that causes unfair treatment; but most of the racism was put on Shylock. All in all, Shakespeare successfully manages to make the audience sympathize for both characters throughout the trial scene.

How does Shakespeare compare and contrast the characters of Antonio and Shylock in the trial scene?. (2016, Apr 10). Retrieved from http://studymoose.com/how-does-shakespeare-compare-and-contrast-the-characters-of-antonio-and-shylock-in-the-trial-scene-essay 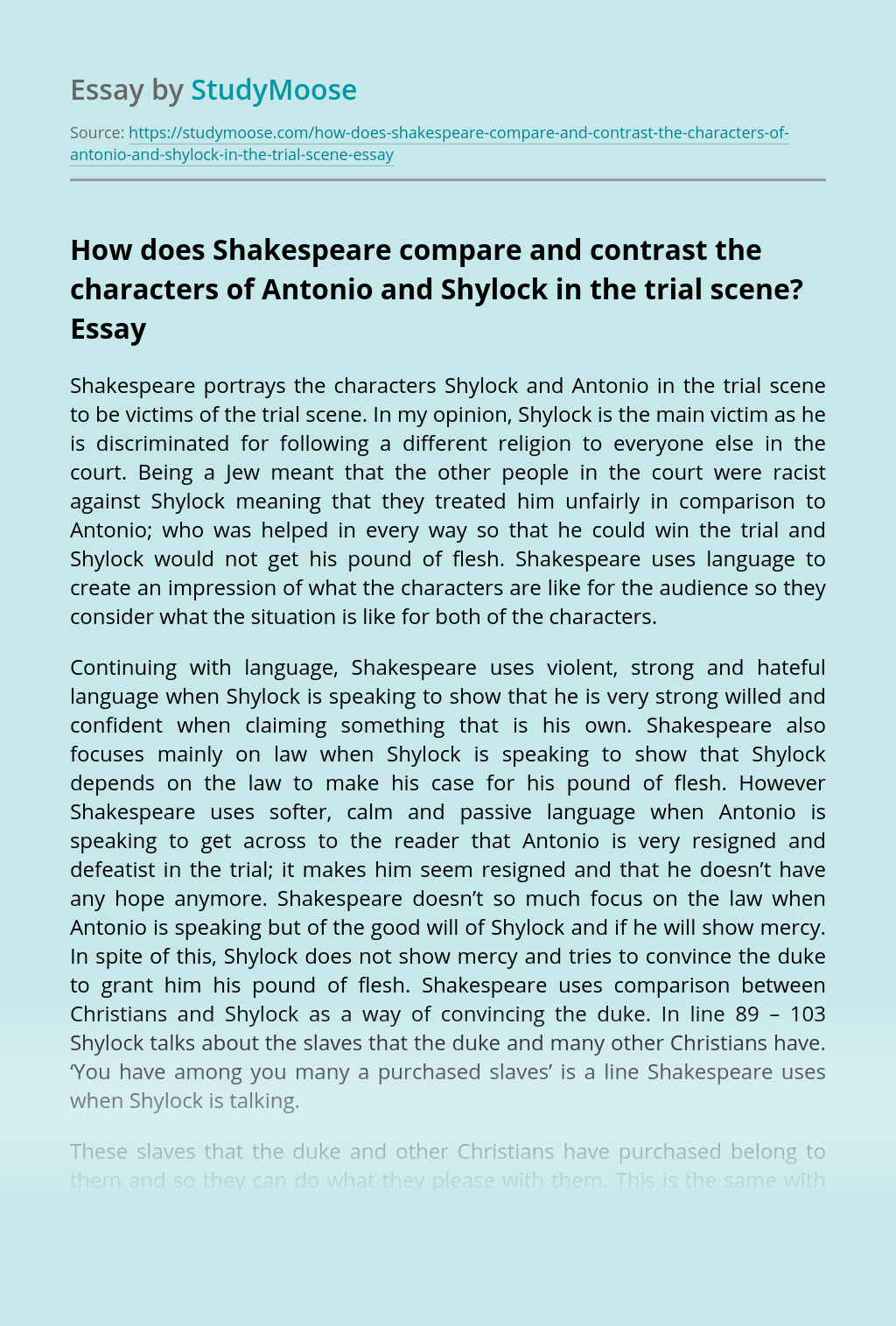