How does Macbeth and Lady Macbeth Change throughout the play?

In the following essay I will be discussing how Macbeth and Lady Macbeth have changed through out the play and I will outline the incidents that take place to show how they change.

Macbeth is first shown at the start of the play, through the second scene with the wounded captain and King Duncan, as a brave and loyal soldier. Everyone thinks well of him, and he is seen as a true hero. He is a brave and bloodthirsty.

Then he meets the witches and hears their predictions that he is Thane of Glamis, and will become Thane of Cawdow and then the King.

Don't use plagiarized sources. Get your custom essay on
“ How does Macbeth and Lady Macbeth Change throughout the play? ”
Get custom paper
NEW! smart matching with writer

As soon as the witches disappear and, he begins to have thoughts that he really might be king. But the only obstruction is that that Duncan is still alive

His best friend Banquo is there as well and the witches predict that he will not become king but his son will. After the predictions Macbeth I very confused he says to him self ”The Thane of Cawdor live a prosperous gentlemen, and to be king” (Act 1:3:71/72).

He immediately sends a letter to his wife Lady Macbeth telling her everything that happened. At this point Duncan declares Malcolm to be next in line to the throne, Macbeth is angry at this decision ”the prince of Cumberland that is a step on which I must fall down or else o’erleap for in my way it lies” (Act 1:4:55/56) Him and his wife start plot the murder. Macbeth is confused and he feels weak at this point of the play he doesn’t want to carry out the murder But when he tells his wife, she so insults him that he changes again, and swayed by her, resolves to kill Duncan and he does, so he is pressured into it by Lady Macbeth.

When he finally agrees he is determined to carry out the murder he wants to get it over and done with this is the quote he uses ”Bring forth men children only, for thy undaunted mettle should compose nothing but males” (Act 1:7:72/74) at this time his confidence is influencing him. After the murder Macbeth feels regret and remorse for what he has done, so he looks at the blood on his hands and says: “this is a sorry sight”. Macbeth clearly feels regret for what he has done.

The murder is successful and Macbeth becomes King Macbeth, his character starts to change into something more dangerous and harmful. He remembers that Banquo was predicted that his son will become king so Macbeth has to have him killed so when he is out with hi on he hires men to kill him, the men manage to kill Banquo but his son escapes. On that same day Macbeth prepares a banquet to which he invites Banquo but he knows he is dead. At the banquet Banquos seat is empty, Macbeth hallucinates he sees Banquos ghost on his chair and No one else in the room sees Banquo and Macbeth thinks that they are messing with his mind. Macbeth says “Which of you have done this?”

S:48). Macbeth becomes ever more outraged and he starts to yell and

scream at everyone in the room. Lady Macbeth senses that something is

definitely wrong and she asks everyone to leave immediately. Macbeth’s decline is clearly evident now. After the banquet Macbeth is tied he says ”as his host/Who should against his murder shut the door” (Act 1:7:72/74) at this moment his ambition to stay king is influencing him. He then revisits the 3 witches and asks them for more predictions he is angry and eager to find out what else the future holds for him, the escape of Fleance is still on his mind and he is scared in case he returns. The witches predict another 3 things they say to beware Macduff, beware that which is not born of woman, and beware of Birnam woods coming towards him. Macbeth laughs this off.

He is not afraid of Macduff, he does not think that anyone can be not born of woman, and he thinks there is no way the woods can get up and move towards him. Macbeth becomes brutal at this stage of the play he has Macduff’s family killed he says ” The castle of Macduff I will surprise/ Seize upon Fife…His wife, his babes all unfortunate souls/ that trace him in his line”(Act 4:1:149/152) his own ambition makes him do this. Macbeth notices that the prediction of the witches are starting to come true as he realises that the trees are moving closer to his castle he becomes to get worried, Macduff and the kings son Malcolm come back invade Macbeth’s castle. He fights Macduff here is where he finds out what the witches meant by ‘beware that which is not born of woman’ Macduff tells him that he was born by a cesarean which is not a natural birth. Macbeth I defeated and is killed.

So there are all kinds of changes throughout the play. Shakespeare wanted to create a character who did evil deeds, but was courageous and conscience-stricken, unsure of the rightness of his actions or knowing they are evil but determined to do them anyway.

Lady Macbeth is the wife of Macbeth. The first time we see her in the play, she receives a letter from Macbeth talking about three witches and what they said to him. It reads that the witches have predicted that Macbeth will be the new king. At this moment Lady Macbeth starts plotting King Duncan’s murder. Lady Macbeth Lady Macbeth is told that King Duncan will be coming to stay at their place. She is startled by the news and calls on evil spirits to change her and lose her femininity. “Come you spirits that tend on mortal thoughts, unsex me here, and fill me from the crown to the toe top-full of direst cruelty” (Act 1:5:40).

She is saying to the evil spirits give me murderous thoughts; make me have no sympathy for humanity at all. When Macbeth arrives Lady Macbeth discusses the plan with him but he thinks it is a bad idea, Lady Macbeth accuses him of being a coward and makes him think he does not love her. “Wouldst thou have that which thou esteem’st the ornament of life, and live a coward in thine own esteem” ( Act 1:7) Lady Macbeth says she can’t do it because Duncan reminds her of her farther. The plan is to kill Duncan and blame it on the guards Lady Macbeth drugs the guard’s drinks, Macbeth has to leave the daggers there but instead he brings them so Lady Macbeth has to do the job of taking them back. She seems to have no fear about the situation, but she seems to be a bit nervous.

The next morning when they discover the King Lady Macbeth puts on an act and pretends to faint this make them look innocent. Duncan’s son’s flea thinking they might get blamed for it but running away makes them even more suspicious.

Between Act 2 and 3, Macbeth is crowned King. Macbeth still can’t stop thinking about the murder but Lady Macbeth urges her husband to put the past behind him. She does not know that Macbeth has a plot to kill Banquo. Macbeth has calmed down towards the end of the scene. A banquet is organized by the King and Queen, by now Banquo has been murdered.

Macbeth is acting weird and Lady Macbeth makes excuses for her husband. “Sit, worthy friends.” My lord is often thus, and hath been from his youth” (Act 3:4) are the words that Lady Macbeth explains Macbeth’s actions. The weird behaviour continues in Macbeth so Lady Macbeth urges the guests to leave. She fears Macbeth will say too much. After the banquet, Lady Macbeth is very quiet. She seems tired and worn out maybe it is because of tiredness or even more than that.

In Act 5 Scene 1, we see Lady Macbeth again, but this time she has been through different moods. A doctor is called, Lady Macbeth is sleepwalking, she refers to her hands that seem to have specks of blood by saying, “Out damned spot, out I say! (Act 5:1) She seems haunted by what she has done. The doctor says to call on a priest rather than a doctor and to keep a close eye on Lady Macbeth.

Macbeth is now ready to fight a battle, and hears of his wife’s’ illness which cannot be explained.. Since the murder the relationship between Macbeth and Lady Macbeth has deteriorated and does not seem to be getting any better. Lady Macbeth is dead. Macbeth feels drained and tells of how she should have died older.

Lady Macbeth is far more savage and ambitious than her husband, but we can see how weak she gets towards the end of the play, she has two sides to her witch stat to show. So she changed from a very determined and ambitious character to a fragile character he cannot keep the secret any longer.

How does Macbeth and Lady Macbeth Change throughout the play?. (2017, Oct 22). Retrieved from https://studymoose.com/how-does-macbeth-and-lady-macbeth-change-throughout-the-play-essay 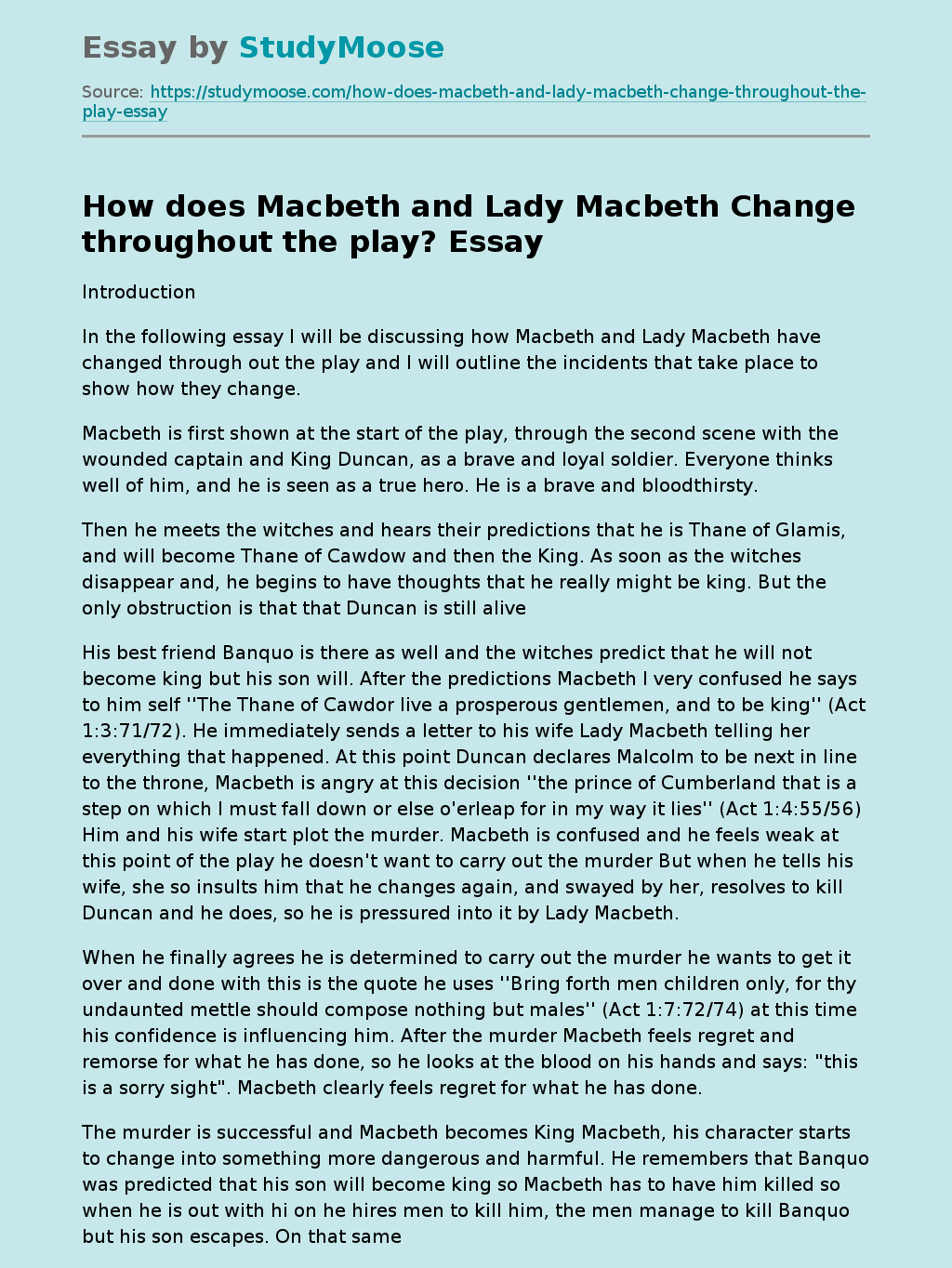