The darkness of man’s heart in "Lord of the Flies"

To “explore the darkness of man’s heart” is one of the key themes in William Golding’s novel Lord of the flies. As the boys on the island regress from well-behaved, well-mannered children aching for rescue to cruel, bloodthirsty hunters who have no desire to return to civilization, the boys naturally lose their sense of innocence that they possessed at the beginning of the novel. This novel is about young English boys Marooned on an uninhabited island, with no adult supervision, forcing them to create their own “civilization”.

Don't use plagiarized sources. Get your custom essay on
“ The darkness of man’s heart in “Lord of the Flies” ”
Get custom paper
NEW! smart matching with writer

Three key ideas of darkness of mans heart are loss of innocence, characters and symbolism. Golding also suggests that every person has the evil within them and often it takes a special event to these things to materialize

This quote is at the end of the novel where the boys encounter the Naval officer, who appears out of nowhere to rescue them. When ralph sees the officer he realizes that he is now safe and will be returned to “actual civilization”. Ralph understands he has lost his innocence and learned about the evil that loiters within all human beings. In the Novel Golding does not expose this loss of innocence as something the children have done but he implies that the loss of innocence comes naturally.

It is ironic how the boys become evil savage and cruel to each other creating a war just like the one they have fled from.

Paragraph 2- Characters
Golding explores the darkness of mans heart by showing the good of young English boys then he shows how “how every person has a dark side”. The boys naturally lose the sense of innocence that they possessed at the beginning of the novel. Ralph, the novels protagonist, is a 12-year-old boy who is elected leader on the island. Ralph tries to create a civilization though- the boys are not co-operating and tension rises. Ralph loses his belief in the innocence of humanity, because he himself does not commit any immoral act, from memory. Whereas Ralph and Jack stand at different ends of the “battlefield” between civilization and savagery.

Darkness of mans heart can be interpreted in the novel by using symbolism. “Lord of the flies” is the bloody, severed sow’s head that jack spears in the forest glade as an offering to the beast. This symbol becomes the most significant image in the novel when Simon confronts the sow’s head in the glade and it speaks to him. Telling him that the evil lies within every human heart. Lord of the Flies biblical meaning is named “Beelzebub, a powerful sometimes thought to be the devil himself. Golding uses Piggy’s violent death symbolically to represent an end to civilization and order on the island. Roger, the symbol of evil, releases the giant boulder that smashes the conch and kills Piggy his death is incredibly symbolic, especially in the way he dies being smashed by a boulder is not only an extremely violent way to die, but it is also senseless and meaningless. The moment is a snapshot for the most important theme of the novel Darkness of mans heart and savagery.

William Golding novel has successful portrayed the darkness of mans heart through these key points, Loss of innocence

The darkness of man’s heart in "Lord of the Flies". (2016, Mar 20). Retrieved from https://studymoose.com/how-does-golding-explore-the-darkness-of-mans-heart-in-lord-of-the-flies-essay 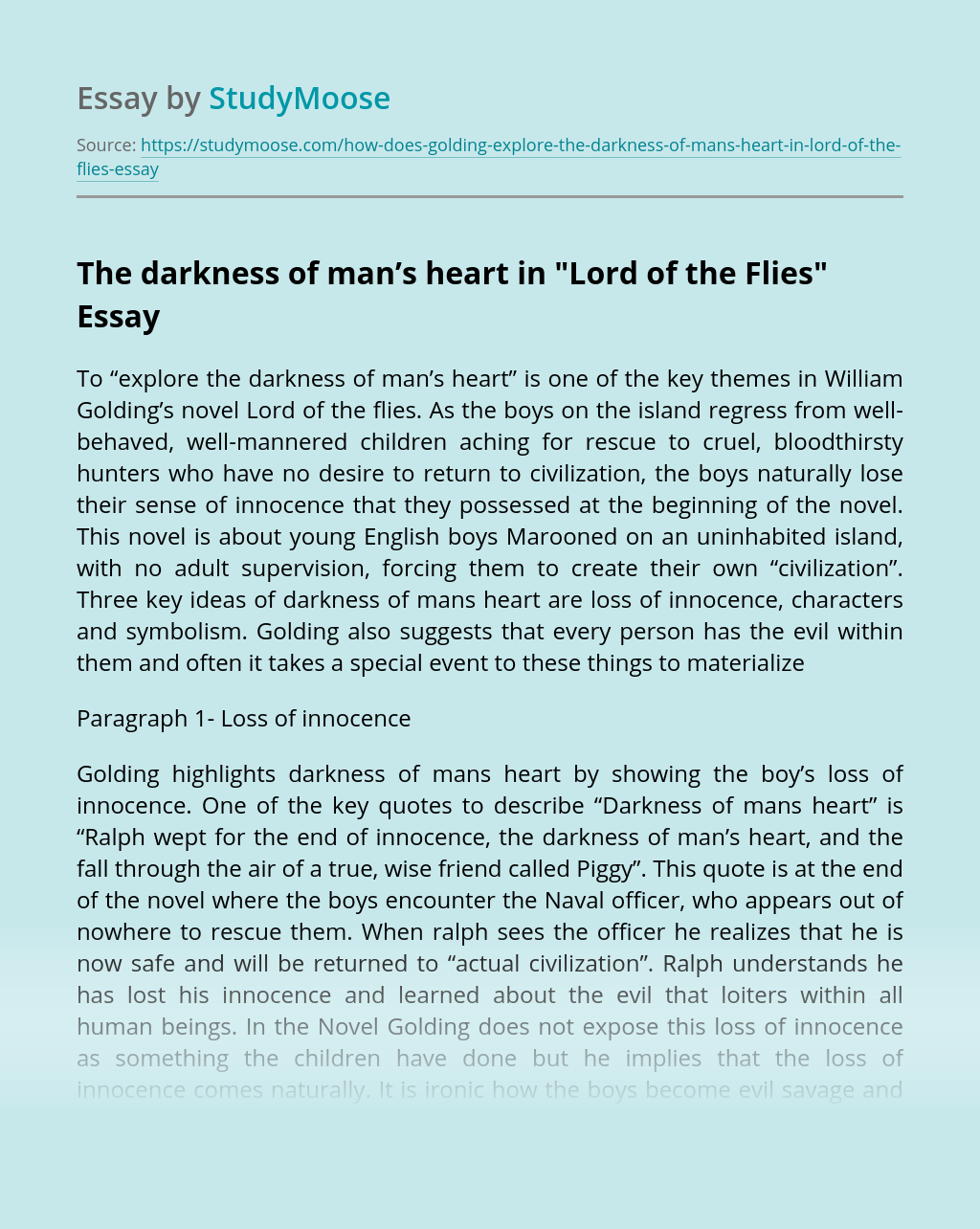