How do you feel about growing old? For some people it's a

How do you feel about growing old? For some people, it’s a scary feeling while others feel it as a period of loneliness. However, it should not be perceived in this way. “We are social animals and growing old is not a solo part”. The first thing that we can do is to bring a change in the person’s attitude. If a person will have more positive attitude towards life their telomeres will not wear off, which is due to the less release of stress hormone cortisol, ultimately makes them younger.

Don't use plagiarized sources. Get your custom essay on
“ How do you feel about growing old? For some people it’s a ”
Get custom paper
NEW! smart matching with writer

People can view their problems as a challenge because if they will deal with the situation as a challenge the level of cortisol increase is temporary which does not affect the telomeres” (Miller, K., 2019). One of the researches done on the attitude of people towards aging concluded that “negative perceptions of aging may modify the association between frailty and frontal cognitive domains in older adults” (Robertson & Kenny, 2016 as cited in Miller, K.

, 2019). Other factors like their living conditions can be improved as people living in dangerous neighborhoods reported of having short telomeres” (Miller, K., 2019). Promote people to maintain their social connections. They do not need to isolate themselves which in turn will help them lead a better life (Roy, S., n.d.). Apart from this, Diet also has impact on the telomers. People should be educated to have a healthy diet plan rather than choosing the ultra-processed food. Research has proved that shortening of telomeres leads to the premature death of the cell and even associated with certain chronic diseases like cancer (Sandoiu, A.

Since the aging population is increasing at a fast pace. According to the report by WHO, the people of 65 years old will increase from 524 million in 2010 to 1.5 billion in 2050. This report forces everyone to think about how much burden it will have on the health care system (Garza, A., 2016). Production of food largely depends on the older population and due to this they are more prone to food insecurity. Thus, giving attention to nutrition in older people makes them less prone to disease (W.H.O, n.d.) and food also plays an important role in reverse aging thus reducing the burden on medical system by keeping the elderly population healthy. Learning and growth is a continuous process. In order to prevent diseases in older people, they need to be equipped with knowledge and training that are required to keep them healthy so that their telomeres won’t wear off. There are different opportunities available that elderly population can grab to keep themselves happy are health literacy training and remove the boundaries for older people for learning at their age. If they are willing to grow personally then they are free to make decisions and can do whatever they want to, thus lowering the stress levels and improving their quality of life. Other ways that can help reduce the burden on the universal system is innovation in the field of medicine such as eHealth technology can improve health and social outcomes (W.H.O, n.d.).

The leadership style for each generation varies. It is essential for everyone to know about the leadership styles and which style is to be used to educate which people as by doing these people build more trust. Generation X is the one who is born between the period between 1965 and 1980. This generation has a greater number of people under 35 years of age, therefore they are quite familiar with their values, attitudes and are well educated. The people who fall under this category of generation are more individually motivated. These people are straightforward, honest, fair and have a quality of being competent. Because of their straightforward and honest nature, they are often difficult to manage. So, in order to get their trust, always approach them to tell truth, present them with the more available opportunities. They expect everyone to respect their values and how they think. As the generation of baby-boomers is almost retired or on the verge of retirement, generation X becomes the focus of most of the managers (Tishma, M., 2018).

On the other hand, the thinking of millennials (Generation Y) is influenced by the events. These are the ones born between 1981 to 2000 (Tishma, M., 2018). This generation has a greater number of women with post secondary education then men making it the history (Jowett & Friese, 2013). It has been seen that these persons focus not on work but rather on life outside the workplace. They like to work as a team and take decisions immediately. The people of this generation do not like to work in a strict environment (Tishma, M., 2018). Therefore, millennials are not fond of the leadership style that was in effect till now as they promote to work in open spaces rather than assigned rooms, cubicles as so on (Jowett & Friese, 2013). They always want to hear instant feedback from their seniors. So, while approaching these people tell them the truth about their work even if they love to have rewards. This is because if they get negative feedback from others about their work, they would probably try to improve to receive rewards (Tishma, M., 2018).

Therefore, each generation has different communicating styles. They have their own ways to be led, so using the desired leadership styles for each generation may help others too build trust in them. While attempting to lead people of any generation, it is important to note that everyone has their own unique qualities and can contribute to the success of their own strengths and weaknesses (Tishma, M., 2018).

How do you feel about growing old? For some people it's a. (2019, Nov 28). Retrieved from https://studymoose.com/how-do-you-feel-about-growing-old-for-some-people-it-s-a-example-essay 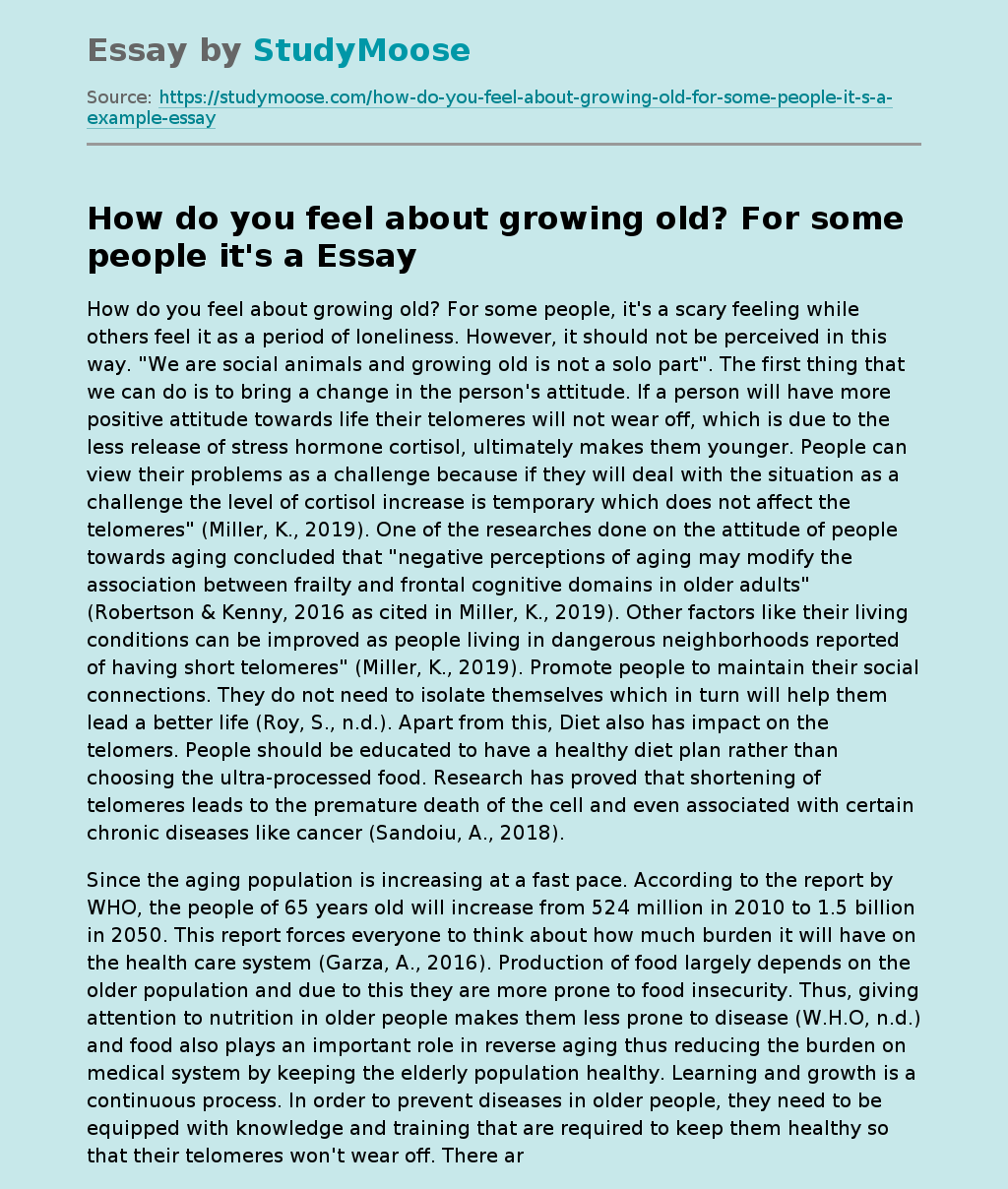