How do the Writers Show a Clash of Cultures in Dead man's path and the Train from Rhodesia?

In Dead man’s path, there is a new headmaster who is educated and over ambitious and wants to turn his under-achieving school into a modern, top quality institution. He says “everything shall be just modern and delightful”. There is an old path that the villagers use to communicate to spirits and for babies to enter the world which the headmaster closes as it runs through his school.

He is unwilling to allow the villagers to use the path and he is inconsiderate about their beliefs.

Don't use plagiarized sources. Get your custom essay on
“ How do the Writers Show a Clash of Cultures in Dead man’s path and the Train from Rhodesia? ”
Get custom paper
NEW! smart matching with writer

This is shown when he says “we cannot allow people to make a highway of our school compound”. He is patronising and doesn’t care about how other people feel as he says “the whole purpose of our school is to eradicate such beliefs”. Whereas the villagers try to compromise and they are more understanding. This is shown when the village chief says “what you say may be true, but we follow the practices of our fathers”.

The writer shows a clash of cultures because there is a young, modern and sophisticated headmaster who disregards traditional beliefs and there are traditional villagers who rely on the path for religious customs.

When a woman dies in child birth, the villagers believe the spirits are angry. This is shown when it says “heavy sacrifices were prescribed to propitiate ancestors insulted by the fence”. They blame the headmaster for closing the path, so they vandalise the school compound. This is shown when it says “flowers were trampled to death, and one of the school buildings were pulled down”.

The writer also shows a clash of cultures when there is a white supervisor who comes to inspect the school. This is because he is shown to be very important and superior to the black Africans who do the work for the white people who in turn make the profits. This is shown when it says “the white supervisor came to inspect the school and wrote a nasty report of the state of the premises and of the tribal-war situation developing between the school and the village.”

In The Train from Rhodesia, there is a train which stops briefly in a small station in the desert. There are some very poor people living near the station and they rely on the visitors from the train to buy there goods, so they can make a living. They are shown to be very poor because it says the children walk barefoot and live in mud huts. This is shown because it says “the stationmaster’s barefoot children wandered over from the grey mud huts.” They also don’t seem have enough food, because their animals are skinny and bony. This is shown because it says “chickens and dogs with their skins stretched like parchment over their bones.”

When the train comes into the station, all the villagers waste no time, to sell their goods to the tourists. This is shown because it says “all up and down the length of the train in the dust the artists sprang, walking bent to exhibit the fantasy held towards the faces on the train.” This shows how much the villagers depend on the train.

A young lady notices a wooden lion carved with incredible detail, and looks very realistic. This is shown when it says “a lion, carved out of soft dry wood with impressionistic detail.”

The lady’s husband bargains with the old man selling the lion and buys it for much lower than he was asking for, just as the train was about to go. The young lady is unhappy with her husband for buying the lion at such a low price. This is because she says “why didn’t you pay for it? Why did you have to wait for him to run after the train with it and give him one-and-six? One-and-six!

The writer shows a clash of cultures because the villagers are shown to be very poor and dependant on the train and also beg for money. This is shown because it says “give me penny, said the ones with nothing to sell.”

The young lady realises how well off she is and feels the shame of buying the lion for one-and-six. This is shown when it says “To give one-and-six for that, she sat there, sick, and the heat of shame mounted through her legs and body.”

How do the Writers Show a Clash of Cultures in Dead man's path and the Train from Rhodesia?. (2017, Oct 21). Retrieved from https://studymoose.com/how-do-the-writers-show-a-clash-of-cultures-in-dead-mans-path-and-the-train-from-rhodesia-essay 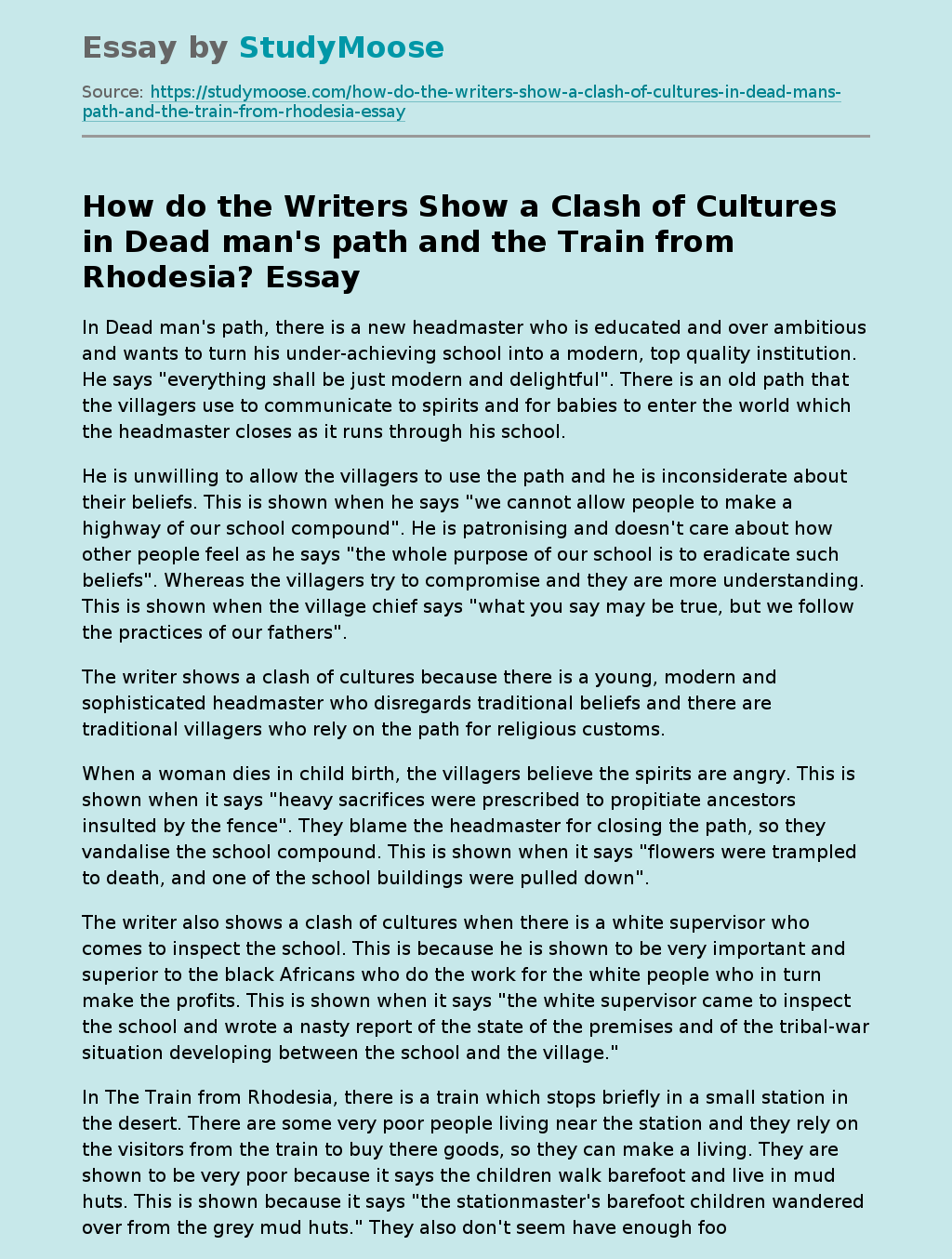