How do generic conventions inform your understanding of Macbeth?

The tragedy of Macbeth is his “Vaulting ambition, which o’erleaps itself and fallson th’other.” In this famous play, William Shakespeare positions the audience to feel pity towards the protagonist involved, and potentially the protagonist is the tragic hero. But in the play, Macbeth, how does he do this? Shakespeare positions us to feel pity for Macbeth, the protagonist, by using generic, dramatic and theatrical conventions such as soliloquies, hamartia and symbolism. My understanding of the play Macbeth, is shaped by Shakespeare’s use of generic conventions to represent the characters inner turmoil and through this, their tragic flaws.

Don't use plagiarized sources. Get your custom essay on
“ How do generic conventions inform your understanding of Macbeth? ”
Get custom paper
NEW! smart matching with writer

Specifically, soliloquies are used to reveal Macbeth and Lady Macbeth’s inner turmoil as they lose their sanity for power.

The first soliloquy in Macbeth is said by Lady Macbeth which reveals her inner turmoil about the letter she receives from Macbeth, as she worries that he may not be strong enough to kill Duncan, and through this her tragic flaw is revealed .

As the witches prediction about Macbeth to become “Thane of Glamis and Cawdor” comes true, she is lured into the trap of believing that he will become king however worries that he is too much of a coward to make it happen. Act 1 Scene 5, line 6, “Yet do thy nature; It is too full o’ milk of human nature”. It’s evident that through the term “o’milk of human nature” symbolises the milk of a human and the only kind of human that produces milk is a female.

Milk only comes from the female when she is a mother and mothers are traditionally nurturing and kind. So Lady Macbeth is saying that Macbeth is quite feminine in the way of his kindness.

Furthermore, Lady Macbeth thinks Macbeth doesn’t have the ruthless nature like she does to strike aggressively at a first opportunity to have power and even though he wants power, his “nature” is too kind to be king in the evil way that she plans to do it. When receiving news that the king is going to stay at the Macbeth castle, she feels she must be the one to kill Duncan in order for Macbeth to become king and her to be queen, however in the soliloquy after she received the news, she talks to the “spirits” about how willing she is to do the deed to get the power and seize the throne. Although at the same time, it touches on the theme of masculinity, “tend on mortal thoughts, unsex me here,” Act 1 Scene 5, line 31. “Come to my woman’s breasts, And take my milk for gall,” Act 1 Scene 5, line 38.

Both quotes suggest the different sex, “unsex me here”, by changing sex Lady Macbeth feels she would be more masculine, than she is now, as a man. With the second quote mentioning “milk”, this suggests womanhood, represented by milk and breasts, symbolising nurture and compassion and she says she has this as well as her ruthlessness but wants to be more cruel, “of direct cruelty! Make thick my blood” Act 1 Scene 5, line 33. When all of her plans and inner turmoil is revealed to us, her hamartia suddenly becomes clearer – her flaw is that she is extremely power hungry and will do anything to feed it, however this results in her downfall as she turns insane from her guilty conscience of manipulating Macbeth, simply because she is too cowardice to do her own business.

Macbeth’s first soliloquy in the play portrays him to be his sane self, making the agonizing decision of whether he should go through with the evil deed of assassinating King Duncan. In his decision he puts into account King Duncan’s qualities, “this Duncan, hath borne his faculties so meek,” Act 1 Scene 7, line 16, and his loyalty and faith towards the king, “He is here in bought trust…as I am his kinsman…then as his host, who should against his murderer shut the door, not bear the knife himself” Act 1 Scene 7, line 12, which represents the kind nature of Macbeth, not wanting to go through with seizing the throne by murdering Duncan because he likes Duncan as he is a strong and humble leader. He also describes that his death would be showered with, “angels, trumpet-tongued,” Act 1 Scene 7.

Angels are a representation of heaven and heaven is symbolised as good which means Duncan will go to heaven if he dies because of his goodness. This reminds us how severe and alarming it is to kill a human being just for power and Macbeth realises this also, this is seen through the use of language, “Bloody instructions” and “our poisoned chalice” and “deep damnation” and through this, an image of darkness is made which makes it clear to us that Macbeth knows what he could do is wrong and if he does it he will be forever in a world of sin. At the same time, the one only reason Macbeth wants to proceed in the deed is his ambition to become powerful, “but only vaulting ambition, which o’erleaps itself and fallson th’other.” Act 1 Scene 7, line 27. The only thing motivating him is his ambition, however Macbeth knows ambition could lead him on towards disaster, (coincidentally it did) therefore decides not to go along with his wife’s plans.

Although after his soliloquy when he admits to Lady Macbeth he doesn’t want to carry on with the plan, Lady Macbeth threatens Macbeth that he will no longer be a man in her eyes but a coward and that she might never love him again if he doesn’t kill Duncan. This affects Macbeth’s inner turmoil because as a man, he like to show his bravery and have courage and by going against his wife could damage his masculinity and so carries on with the play. My understanding of Macbeth’s tragic flaw, as evidenced in this soliloquy, is that he doesn’t want to damage his pride, his masculinity or his ambition and this, then, leads to his downfall.

The next soliloquy used by Macbeth reveals to the audience that the pressure of killing the king is finally taking a turn on his mind. In his speech, Macbeth makes accusations of seeing a dagger, identical to his, in front of him however he becomes confused when he can’t decide what is happening. At first, when the dagger appears he believes it to be a “false creation” which is a hallucination, as he has already tried to grab it but failed, caused by a “Heat- oppressèd brain”, in other words, he’s ill.

Then just after saying this, he believes that it’s something different, “Thou marshall’st me the way that I was going,” Act 2 Scene 1. The meaning for this quote is that the dagger is pointing him in the direction that he is going and this symbolises and proves that his decision to kill the king is already set in motion. The direction of the dagger may have been just his mind but could have been witchcraft also…

3“Witchcraft celebrates, Pale Hecate’s offerings,” Since Macbeth already believes the witches, there is no other reasons not to disagree with them. Macbeth’s tragic flaw of his self-pride of masculinity, ambition and lust for power ends up in his downfall of insanity from confusion and stress and later on in the play he metaphorically “plummets to his death” as he loses control of his paranoia. Shakespeare positions the audience, with monologues like this, to see that Macbeth is stressed, scared and confused about the act he is about to commit, this slowly leads him to lose his sanity just so he can please his wife, achieve his goal of ambition and protect his pride and masculinity.

My understanding of Macbeth is greatly shaped by generic conventions such a soliloquies. Throughout the play soliloquies were used to explain the main character’s inner turmoil. Macbeth appeared to be a power greed murder that stopped at nothing to be the king of Scotland. However through soliloquies, it was clear to me that this was his hamartia and his tragic flaw, which made him this way, was that he was ambitious, proud of his masculinity and courage. So when Lady Macbeth threatens him and names him a coward for not killing

Duncan, he want does it to protect his pride. This makes us pity him as he had no choice and becomes insane from the paranoia and guilty conscience. In my opinion, I think Shakespeare had a message of purpose of Macbeth and that was to show the audience that ambition and desire is destructive and no matter how much a person wants power, they should never let it overcome them.

How do generic conventions inform your understanding of Macbeth?. (2016, May 01). Retrieved from https://studymoose.com/how-do-generic-conventions-inform-your-understanding-of-macbeth-essay 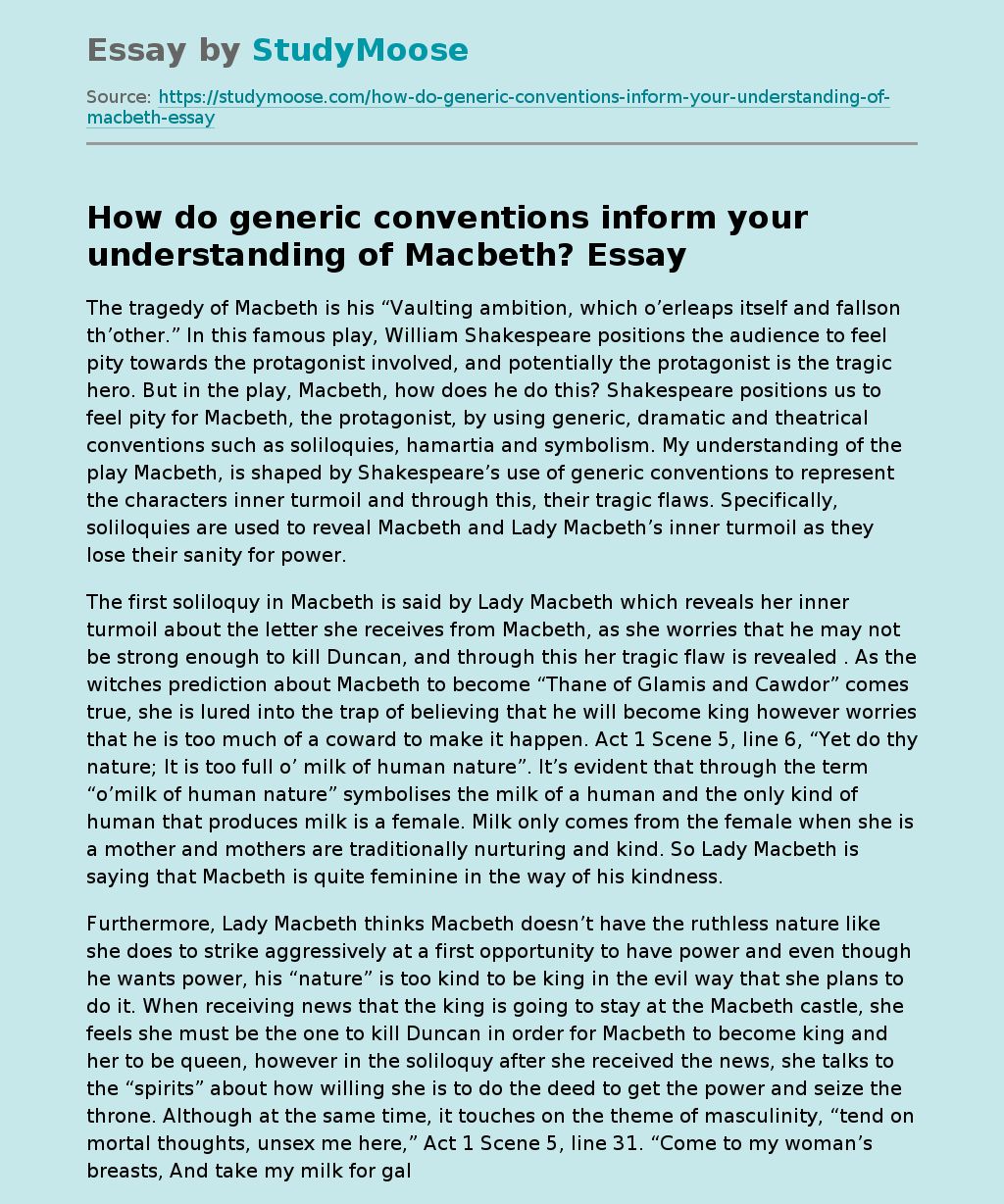