How Did Various Groups Respond to Australia's Involvement in the Vietnam War?

In 1965 Australia decided to send combat forces to help the government of South Vietnam in the struggle against communist activities from the North. Public opinion generally supported the verdict to send troops to South Vietnam. However, as more and more troops were sent, consisting of young men who were conscripted, there were protests, but the majority of Australians still supported the war. General support for our attachment gradually turned to opposition as the war continued and an end did not appear.

Don't use plagiarized sources. Get your custom essay on
“ How Did Various Groups Respond to Australia’s Involvement in the Vietnam War? ”
Get custom paper
NEW! smart matching with writer

At the time opinion polls showed that there was great support for the war and newspapers nationally were maintaining their views in favour of the war. The Labor Party contested the idea of sending more troops to Vietnam and in 1966 it suffered its worst election since 1931. Although most members of the Labor party granted that communism was a threat to our nation and that it was important to uphold the relationship between our allies, they did not agree with conscription and that the Australian troops should be forcedly sent off to war.

They also questioned wether increased military forces would in fact clear up this problem. Despite huge commitment from both America and its allies the war continued to go badly for them and there was a strong uprising of an anti-war movement. This movement spread to Australia and in May 1965 a group of mothers founded an organisation called save our sons (SOS). The Save our Sons movement led the campaigns against conscription particularly after even more conscripts were sent to fight in Vietnam.

During the Vietnam War, a person could refuse to register for national service if he claimed that he could not be involved in war for personal or religious reasons. They would be known as a conscientious objector. The continuation of the Vietnam War divided Australian society, and the anti-war movement grew in size and intensity. A new opinion poll was taken in 1969 suggesting that now only 39% of the populace supported the war effort. Thanks to television, some of the actual tragedies of war were broadcasted in Australian homes.

Across the country there were public rallies and protests where people spoke out against the war. By May 1968, more and young men were burning their registration papers as public displays of defiance; they simply refused to register for National Service. In 1970 there were two large anti-war protests in the capital cities. These well-organised and peaceful demonstrations were called the Vietnam moratorium marches. The first march was in Melbourne in May 1970 attracted over 100 000 people in a protest march. By late 1970 Australia had begun to reduce its military commitment in Vietnam.

These reductions continued throughout 1971 and by February 1972 the last of the troops were finally home. In the Vietnam War 520 died and 2400 were wounded. In conclusion, in the earlier years of the Vietnam War, Australia’s populace was very much in favour of sending our soldiers to help combat the communist forces. However, as time wore on and there was no apparent end to the warfare the people grew tired of supporting what seemed like a pitiful cause and support for the involvement steadily turned to opposition. The introduction of conscription played a major part in the division of opinions and left ample reason for protest.

How Did Various Groups Respond to Australia's Involvement in the Vietnam War?. (2018, Aug 23). Retrieved from https://studymoose.com/how-did-various-groups-respond-to-australias-involvement-in-the-vietnam-war-essay 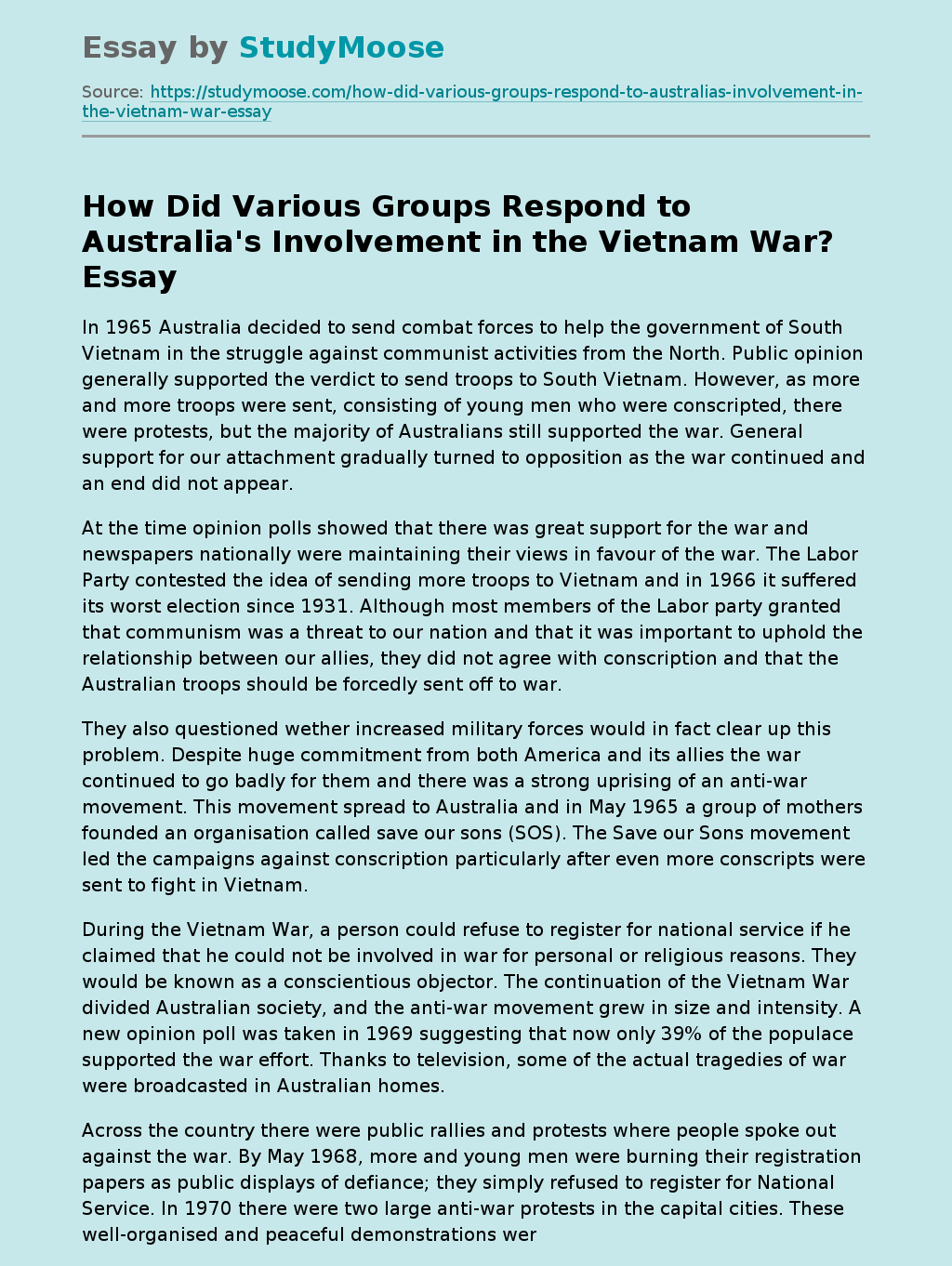