How Did the Gilded Age Change the United States?

The term Gilded Age is used to refer to the time period in United States history, after the Civil War and Reconstruction, which lasted from the late 1860s until 1896. The term was first used by the famous American author Mark Twain but it entered the popular lexicon after the publishing of the book titled The Gilded Age: A Tale of Today (“The Gilded Age | Boundless US History”, 2019). The Gilded Age had a symbolic meaning as gilded items are made of cheaper metals but covered with a thin layer of gold, making them shine and seem more valuable than they actually are in reality.

Don't use plagiarized sources. Get your custom essay on
“ How Did the Gilded Age Change the United States? ”
Get custom paper
NEW! smart matching with writer

This time period was similar as many people made huge fortunes using newly discovered technologies. The rich were making ostentatious displays of their riches while their poor workers starved and lived in disease-ridden tenement houses. There was rapid industrialization, mass immigration, corruption, and many other large scale changes. Society went through massive political, economic, technological, and social changes during the Gilded Age, and by its end; the United States had become a major industrial power and not soon afterward a world power.

This essay highlights some of the most important economic, social, political, and technological changes that took place during the Gilded Age and left the United States transformed.

The biggest economic changes that took place during the Gilded Age occurred due to the shift in the U.S. economy from one that was primarily agricultural to one that was industrial and more focused on the mass manufacturing of consumer goods on a larger scale.

The associated growth in railroads during this time meant that goods could be transported further across large distances and demand for mass-produced goods increased, which further fueled the growth of industries. Workers could also move to different cities from rural settlements to look for better-paying work. There was also greater demand for workers to fill the factory positions and this attracted workers from the rural areas as well as foreign countries.

These foreigners and other workers were unskilled workers performing routine and repetitive tasks on assembly lines that did not require much training, so they were not paid very well. They also had to work long hours, without overtime pay frequently in dangerous conditions. The owners of these factories were given many derogatory terms such as “robber barons” for their tendency to exploit their workers by paying them extremely low wages and to hire child labor (“The Gilded Age | Texas Gateway”, 2019). They were also lauded for their entrepreneurial skills and contribution to the economy by increasing productivity, enhancing the American industries, increasing employment and raising the country’s GDP.

Some of these financiers and industrialists termed “captains of industry” made unimaginable fortunes during the Gilded Age (“The Gilded Age | Boundless US History”, 2019). Andrew Carnegie owned U.S. Steel and companies involved in constructing bridges and railroads and also extracting and selling oil. J.P. Morgan was a successful financier and banker who reorganized the U.S. railways, bought the steel company from Carnegie and had interests in railroads, shipping, and steel. He was extremely successful due to his ability to monopolize entire industries. John D. Rockefeller invested in the oil industry, created a monopoly, and established Standard Oil (“The Gilded Age | Texas Gateway”, 2019).

Although they practiced capitalism, intense competition, and increased their profits through any and all available means they also donated large amounts of their riches to philanthropic causes such as universities, schools, museums, public libraries, etc. Andrew Carnegie gave away 90% of his fortune to charitable causes and John D. Rockefeller did the same for 50% of his total net worth (“The Gilded Age | Boundless US History”, 2019).

There were large scale changes in the structure and demographics of American society due to the influx of immigrants from Austria, Germany, Greece, Russia, Italy, Poland, Hungary and other countries primarily located in central or southern Europe (“The Gilded Age | Boundless US History”, 2019).

The movement of American citizens from rural areas to the cities also contributed to the changes in the racial, class and ethnic makeup of U.S. cities. Some major cities such as Chicago and New York developed entire neighborhoods that were populated by members of a single nationality or ethnicity, as newcomers settled in the same area where other people from their culture resided.

This influx of immigrants and changes in society was not received positively by everyone as locals began to feel threatened by the strangers moving in in droves. The group that opposed immigrants and immigration and ostensibly supported the rights of American citizens called themselves nativists and they issued propaganda against the immigrants in the newspapers. The nativists caricatured the immigrants by picking up on their worst stereotypes and suggesting that they were “radicals and culturally inferior” and that their presence and actions would destroy American culture and important institutions (Henretta, Edwards & Self, 2018, p. 360).

The fact that there was a shortage of adequate, safe and clean housing in the cities meant that many workers had to live in overcrowded, unsanitary, unventilated, poorly lit tenement houses. These areas later on transformed into slums and ethnic ghettos (“The Gilded Age | Texas Gateway”, 2019). Many factory workers had to work for over 10 hours a day and six days a week in what would now be recognized as sweatshops. They earned very little and had no protection or security if they lost their job or became injured during the course of their work.

Many workers banded together for the first time to form labor unions, carry out labor strikes and negotiate with the factory owners. The Knights of Labor emerged in the 1880s and united workers in order to advance their interests and “counter the power of capitalists” (Henretta, Edwards & Self, 2018, p. 351). Big business owners were confronted and the workers demanded fewer working hours, decent pay and safer working conditions. They also fought against children working in factories and being paid less than adults (“The Gilded Age – History.com”, 2019).

The politics of the Gilded Age operated according to what has been termed the Third Party System, as the majority of the votes were won by the Democrats or the Republicans and sometimes also political campaigns run by labor and farm unions. Almost all of the eligible voters were partisans and males. The issues that dominated the political discourse were social and cultural in nature such as whether immigration ought to be allowed, if alcohol should be prohibited, etc.

There was also a new phenomenon of politics being used for civil and social reform as issues like social equality, wage increase, eliminating child labor, the interests of various racial and ethnic groups, women’s rights, public education, cleaner cities, sanitation, and housing provision began to be debated. Larger cities developed their own well-oiled political machines which were frequently influenced by different interest groups.

Congress was under the control of the Senate and the robber barons often used financial bribes to corrupt political officials. Governments at local and state levels were controlled in this manner. The federal government was not much better either as it too was under the influence of big business. Eventually, Congress passed legislation like the Interstate Commerce Act and the Sherman Anti-Trust Act to counteract the excesses of big business and the social ills that were being caused by their greed for increasing profitability (“The Gilded Age | Texas Gateway”, 2019).

Race relations were also influenced by politics during the Gilded Age as the South was dominated by Democratic, White, and conservative politicians who controlled the government in these states. Although the Reconstruction had granted African Americans many rights, these politicians and officials caused society to go in reverse by making discrimination against Blacks legal through the passing of the Jim Crow Laws, encouraging violence against them, and legitimizing segregation.

Blacks were not allowed to vote or serve on a jury and it was made more difficult for the African Americans who were educated and skilled, to progress economically and be seen as the social equals of Whites during this time period (“The Gilded Age | Boundless US History”, 2019). This type of racial discrimination was not restricted to just Blacks as the immigration of Chinese was also made illegal through the passing of the Chinese Exclusion Act of 1882 (Henretta, Edwards & Self, 2018, p. 356).

American society progressed rapidly during the Gilded Age as technological advancements led to modernization and industrialization. The transport system and infrastructure was improved with new railway lines being laid, bridges and canals being built over waterways and rivers, moving within the city were made easier by the introduction of trolleys and trams, and roads were made more comfortable to ease journeys and the transport of goods (“The Gilded Age – History.com”, 2019). The Great Plains, which were considered a “worthless desert” in the past, were made more accessible through railroads and they became pivotal to the growth of the economy (Henretta, Edwards & Self, 2018, p. 315).

The invention of the telegraph allowed for information to be communicated much faster and the establishment of the first transcontinental telegraph line in 1861 enabled messages to be sent across the sea to European countries (Field, 2009). The invention of electricity, the implementation of the electrical grid in large cities, and the ease of availability of light bulbs lit up the streets and the homes of the rich. The telephone enabled people to communicate in real-time. There were also improvements in sanitation with the city taking on the responsibility of garbage disposal and sewage. The quality of life of the average American improved dramatically.

Thus the Gilded Age brought about many changes in U.S. society, which emerged from this time frame modernized, industrialized, more diverse, and prosperous than before.

How Did the Gilded Age Change the United States?. (2020, Nov 25). Retrieved from https://studymoose.com/how-did-the-gilded-age-change-the-united-states-essay 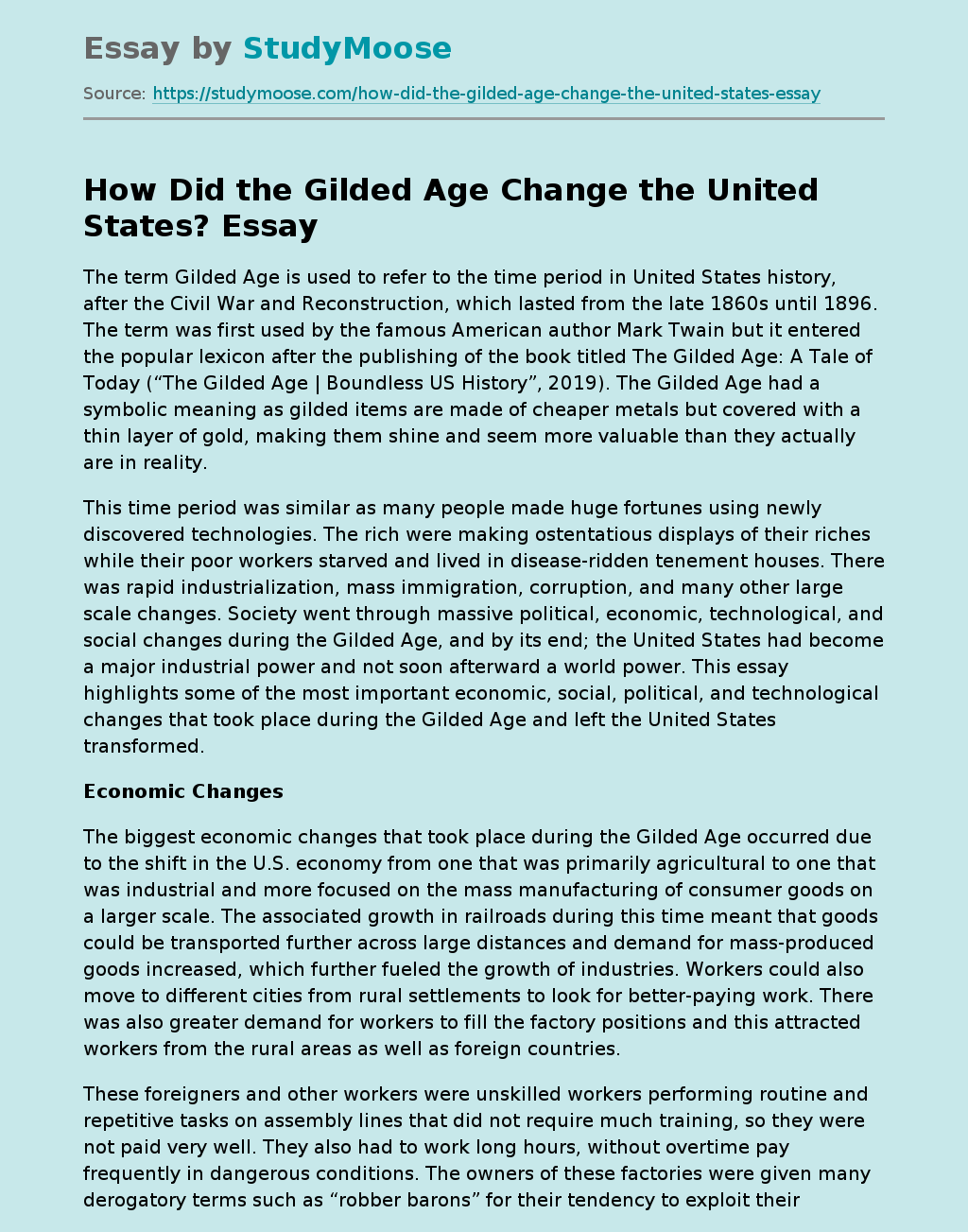