How did the cold war effect Australia

The Cold War originally referred to a struggle or a conflict that had not escalated into fighting and military conflict, that is, had not escalated into a hot war. Between 1945 and 1991, the United States and the Soviet Union saw each other as potential enemies, threatening each other’s larger global economic, political, and military goals. The Cold War thus was global competition between the United States and the Soviet Union to shape and control the post-World War II global economic and political order.

Throughout the Cold War, the United States saw the Soviet Union and communism as the greatest threat and challenge to its global leadership and dominance of an emerging global economy and industrial society. The United States was determined to limit the military and political expansion of Soviet power in order to prevent it from challenging American global economic and political dominance.

In 1945 and 1946, there were increasing debates within the United States government over how to deal with the Soviet Union.

Should the United States now see the Soviets as an “evil empire” that threatened to undermine the peace and freedom of an American-led “free world”? The influential 1946 memo to President Truman said that the Soviets were a global threat to peace.

It said that the Soviet Union had a secret plan to conquer the world and spread communism throughout the world. The Soviets refusal to accept American leadership and a global democratic, capitalist community of nations, demonstrated that capitalism and communism could not peacefully co-exist. The Soviet domination of Eastern Europe after World War II and the continuing Soviet military build up was proof that the Soviet Union was threatening global peace and security

The domino theory was given its specific game and meaning in 1959 by President Dwight D.

Elsenhower. He used this theory to refer to the potential spread of communism in Southern-Asia. He specifically said, “you can have a row of dominoes set up, you knock over the first one, and what will happen to the last one is the certainty that it will go over very quickly. So you could have a beginning of a disintegration that would have the most profound influences” The influences that he is talking about were the influences of communism. He believed as many others did that if one country in Southern-Asia fell to communism then all surrounding countries would also. This Theory could be applied to the Soviet Union during 1917 to 1980. In this time the Soviet Union gained power by militarily taking land from other countries.

The domino theory was a threat to world peace because every country was afraid of falling to communism. The Southern-Asian areas would be the starting domino and when it falls the rest of the dominoes (counties) would eventually fall with it.

The domino theory effected Australia the same way as the rest of the world. They were scared that eventually they would fall under communism.

Fifty years ago on April 4, 1949, twelve countries signed the Treaty of Washington and formed the North Atlantic Treaty Organization (NATO). Therewere a total of sixteen countries that signed this treaty. Some of those countries were: Belgium, Canada, Denmark, France, Germany, Greece, Iceland, Italy, Norway, Portugal, Spain, Turkey, United Kingdom, Australia and the United States. This organization was born out of the need to strengthen the capacity of a war-devastated Europe in order to defend itself against and deter a Soviet Union, which was rapidly consolidating itself under communism and strengthening its military power. NATO wanted to help the world maintain peace due to the Soviet Union’s threat on the non-Communist countries of Western Europe.

NATO weren’t a threat to world peace, NATO were the organization that were against communism and wanted world peace. NATO tried to help non-communist countries against the Soviet Unions threats.

Australia was a part of NATO organization, which was against communism. So the effect it had on Australia was good. By Australia signing up for NATO it just influenced what everyone already felt and this was that they didn’t want to be taken over by the Soviet Union and by communism.

Communism was one of the greatest issues during the cold war. The Soviet Union wanted to spread communism through out the world. Communism is a political and economic system in which the state dominates all aspects of the economy. Under communism, the state controls and runs industries and farms, and government leaders control and run all aspects of society in the name of “the people.” In communist’s countries, the government and elite leaders rule the country, believing that they know what is best for the people and their society.

Whereas, in democratic capitalist countries such as the United States, individuals and corporations are free to control their own economic lives and businesses and the people shape and control their government and society. So the Soviet Union spreading communism throughout the globe was a major threat to the United States.

Communism was a threat to world peace because no one wanted the government or the state to have complete control over them. People want to have their own lives and their own rights. So if communism took over it would eventually causes a nuclear/world war.

* Australian forces sent to Malayan emergency – June 1950 to accompany the South Vietnamese into combat. In 1965, Australia’s commitment to the war was stepped up to include combat troops.

Confrontation was a small-undeclared war fought between 1962-1966 during which Indonesia sought to destabilise the newly independent Malaysia. After two Indonesian raids on the Malayan peninsula in 1964 the Australian government deployed a battalion in Borneo. Indonesia and Malaysia signed a peace treaty in 1966.

How did the cold war effect Australia. (2016, Jul 15). Retrieved from http://studymoose.com/how-did-the-cold-war-effect-australia-essay 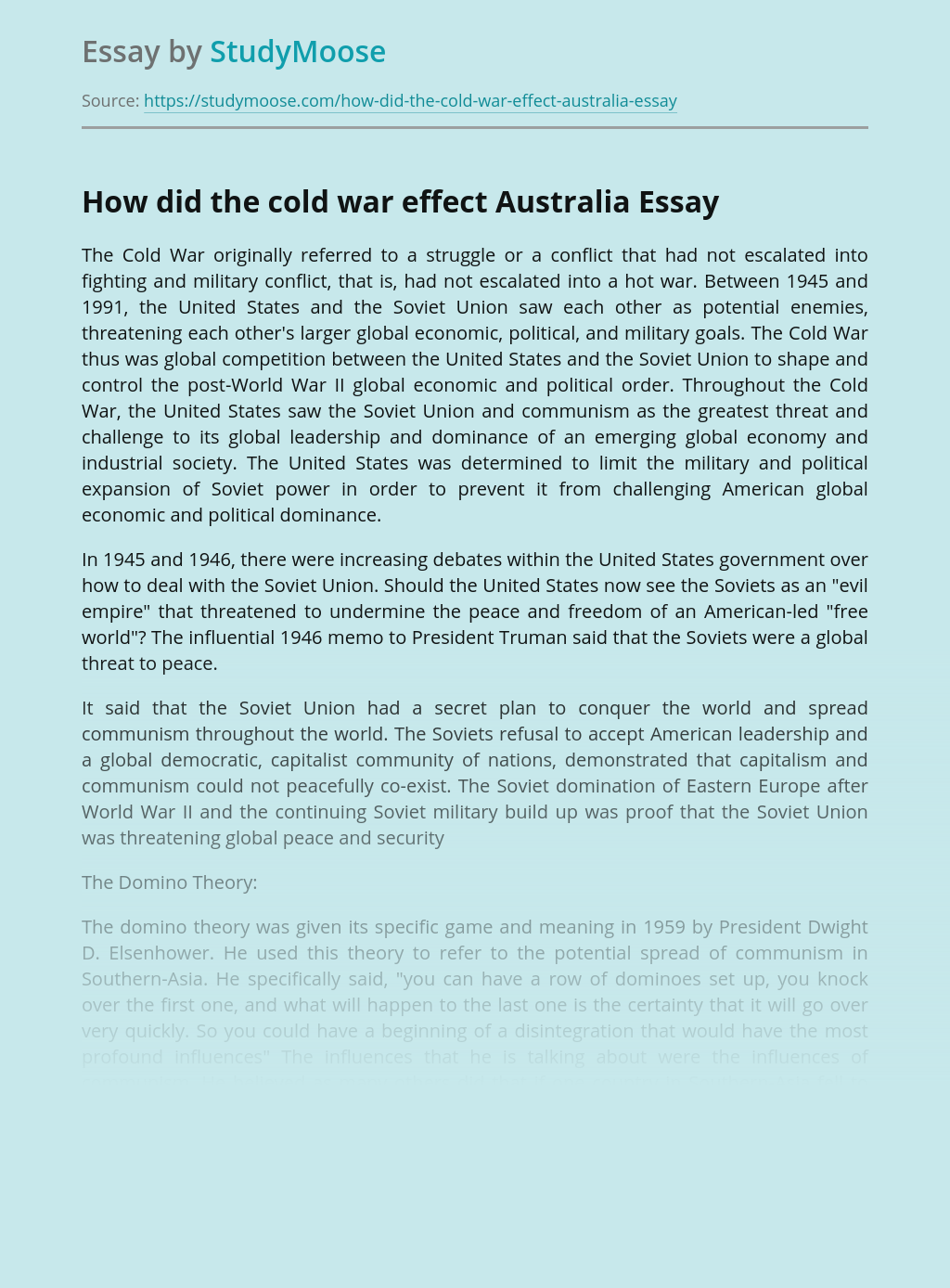 Don’t waste time
Get a verified expert to help you with How did the cold war effect Australia
Hire verified expert
$35.80 for a 2-page paper
Stay Safe, Stay Original