How Did Life Change for the Blacks After the Civil War?

Before the Civil War, most slaves lived on small cotton plantations. Here, the owner worked alongside them.

Don't use plagiarized sources. Get your custom essay on
“ How Did Life Change for the Blacks After the Civil War? ”
Get custom paper
NEW! smart matching with writer

The bigger the plantation, the more the slaves, and thus the weaker human relationship would be between master and slaves. They received, in general, harsh treatment because they were considered property. There were many social inequalities. Black Codes were passed to limit blacks’ freedom even more than it was already. They were not allowed to marry legally or learn to be literate. Slaves could be “sold down the river”, and had no privacy from their masters.

They were not allowed to go outdoors after dark, get together in groups of three or more, exit their owner’s property without a written pass, or own weapons. This changed somewhat after the Civil War.

Role of Blacks in the Civil War

The blacks played a major role in the victory of the North in the Civil War. There were many black soldiers in the war who worked behind the scenes for armies of the North. During Reconstruction, blacks exercised political power for the first time in the South.

They were included as authors of new state constitutions, along with military governments, scalawags, and carpetbaggers. On January 1st 1863, the Emancipation came into effect. It was a proclamation issued by President Abraham Lincoln that declared freedom for all slaves in states still in rebellion against the federal government. This meant that more slaves could live a free life again, but only until the Black Codes were passed. Without the blacks’ contributions to the Civil War and Reconstruction, things could have turned out a lot different.

As for life after the Civil War and Reconstruction, there were many social changes. These were mostly in support of the blacks, until the start of the 20th century. Thanks to the protection of the thirteenth, fourteenth, and fifteenth amendments to the Constitution and the Civil Rights Act of 1866, blacks relished a period of time during which they could vote, have a say in politics, acquire land, find a job, and make use of public accommodations. They were able to legally marry, worship how they wanted, and could form private clubs, along with other rights.

Blacks’ Position from 1890s and the 20th Century

This was until the 1890s, which is when the southern states began coming up with ways to exclude blacks once again. In response to this, many blacks moved into the Northern states, and some even went back to Africa. One of the parts of their lives that didn’t change much was that the majority of southern blacks remained in poverty because sharecropping didn’t earn them enough money to improve their conditions. Despite this progress socially, there were many more rights the blacks didn’t have, but the whites did.

These hard times for African Americans continued into the 20th century, which is when the Civil Rights Movement and other efforts came into play in an attempt to equalize rights between races. As I said before, life for blacks after the Civil War and Reconstruction was somewhat better than life before. Their life still wasn’t impeccable, and it was a long road to equality.

How Did Life Change for the Blacks After the Civil War?. (2016, Aug 04). Retrieved from https://studymoose.com/how-did-life-change-for-the-blacks-after-the-civil-war-essay 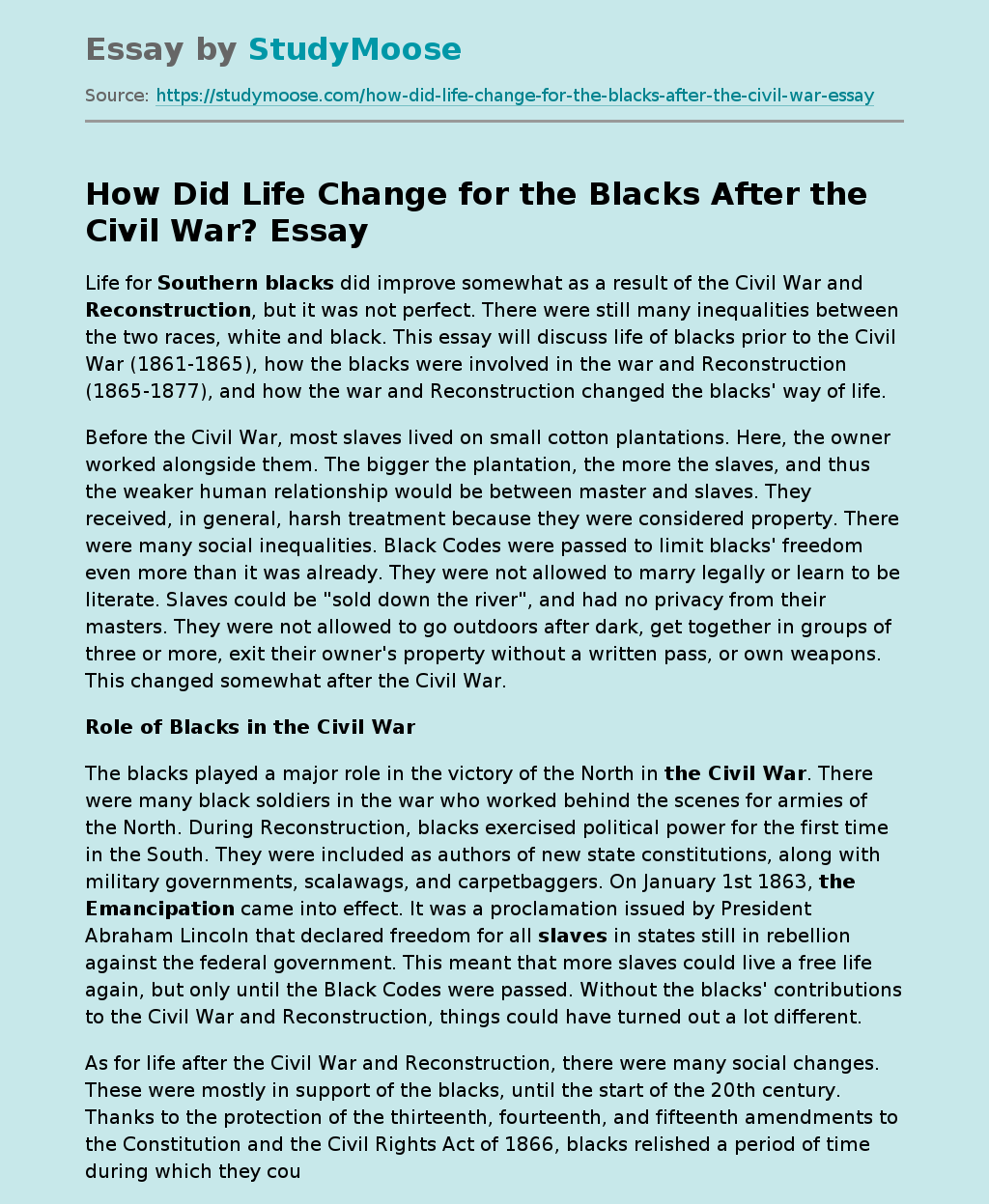