How did America change after the War of 1812?

Change occurs in every time period. Today Americans work and communicate faster through home computers and cell phones than they did thirty years earlier. Change also occurred early in the nineteenth century. After General Andrew Jackson led the United States victory at New Orleans, nationalism increased and Americans looked forward with confidence to a future filled with changes. They would not be disappointed. The years after the War of 1812 produced great economic and political changes.

The economic changes of the years following the War of 1812 varied from new innovations to government policies.

Turn in your highest-quality paper
Get a qualified writer to help you with
“ How did America change after the War of 1812? ”
Get high-quality paper
NEW! AI matching with writers

Eli Whitney’s greatest inventions, the cotton gin and system of interchangeable parts, both helped spur the growing American economy and industrial revolution. The cotton gin improved the output of workers by a thousand percent and in ten years, the production of cotton in the country rose from 5 million pounds to 63 million pounds, thus making the South the leading cotton producer, shipping it to Britain and New England. Unfortunately, the cotton gin also caused a higher demand for slave labor, and by 1860, approximately 33% of Southerners were slaves.

The system of interchangeable parts introduced Americans to mass production. When Eli Whitney took the government order of 10,000 muskets, he showed that the majority of goods could be mass-produced. Both the cotton gin and mass production method would revolutionize the United States.

In addition, tariffs helped protect American trade. The British stored goods during the war and flooded them on America when peace was achieved. To combat the inundation of imports, the national government issued a tariff to encourage people to buy American products and stimulate the growth of the economy.

Moreover, the tariff assisted in rebuilding the federal treasury. After a growth in trade, the Panic of 1819, the country’s first major economic setback, hit. Europeans demanded American grain, meat, tobacco and cotton; farm products and land prices soared as farmers rushed to increase production. State banks would make loans to anyone who needed money to buy land or farm equipment. Afterwards, the country began to fall into depression as Europeans began to buy less expensive cotton from India and bumper crops.

Crop prices and land prices collapsed; land values in Pennsylvania dropped from $150 an acre to $35 in four years. Unemployment increased with 50,000 people unemployed or erratically employed in New York, Philadelphia, and Baltimore. Furthermore, state banks failed, and the federal bank foreclosed mortgages on homes, farms and shops. Perhaps John Calhoun would be able to describe it best: “There has been within these two years an immense revolution of fortunes in every part of the Union; enormous numbers of persons utterly ruined; multitudes in deep distress.” It is obvious that economic changes were ubiquitous during the time period after the War of 1812.

During the time after the war, political changes influenced society significantly. Different issues like the Missouri dispute and the Tariff of 1816 led to sectionalism, dividing the nation. Slavery had been legal in the Missouri territory under French and Spanish rule, but the North and South disagreed on whether it should have been a slave state. The compromise was to permit slavery in Missouri, create Maine as a free state, and leave future states north of 36°30′ N latitude as free states. Jefferson felt the debate was ominous: “…the momentous question, like a firebell in the night…a bell signaling death of the Union…this is a reprieve only, not a final sentence.” Also, the tariff was supported by the West and North and opposed by the South. Next, Monroe’s foreign policy changed how other countries saw the United States considerably. The country had always tried to remain neutral before – impressment and the seizing of ships were allowed. The Monroe Doctrine dictated that Latin America and the Pacific coast of the Americas needed to be left alone by Europeans and Russians.

Monroe said that the American continents “…are henceforth not to be considered as subjects for future colonization by any European Power.” This policy succeeded since it met both British and American interests and was enforced by the British fleet for the next hundred years. Next, the Adams-Onis Treaty helped the country gain Florida and set the western boundary of the Louisiana Purchase, as well as renouncing any claim of the United States to Texas. This was another addition to the ever-expanding country. Lastly, an entirely new political party system developed. The Federalists ceased to exist as a national organization after the 1816 election, and two new party alignments formed: the National Republicans, who supported the federal government and national bank and were from the higher class, and the Democrats, who supported individual states, were against the national bank, and came from the working class. As one can see, there was an abundance of political changes after the War of 1812.

The War of 1812 greatly affected the United States economy and political system. The years following the war were full of economic ups-and-downs. For example, the cotton gin boosted the cotton industry and southern economy. Although the tariffs of 1816 and 1828 were supposed to protect trade, they proved ineffective. The Panic of 1819 occurred when the European trade bubble burst. On the other hand, the nation’s government underwent various changes. Sectionalism split the nation into the North and the South, and the Missouri Compromise proved to be only a temporary resolution to the slavery debate. The Monroe Doctrine helped the country gain respect, and the end of the Federalists altered the political party system. Although the War of 1812 didn’t have any great impact on the country directly after the war, America experienced numerous changes the years following the war. 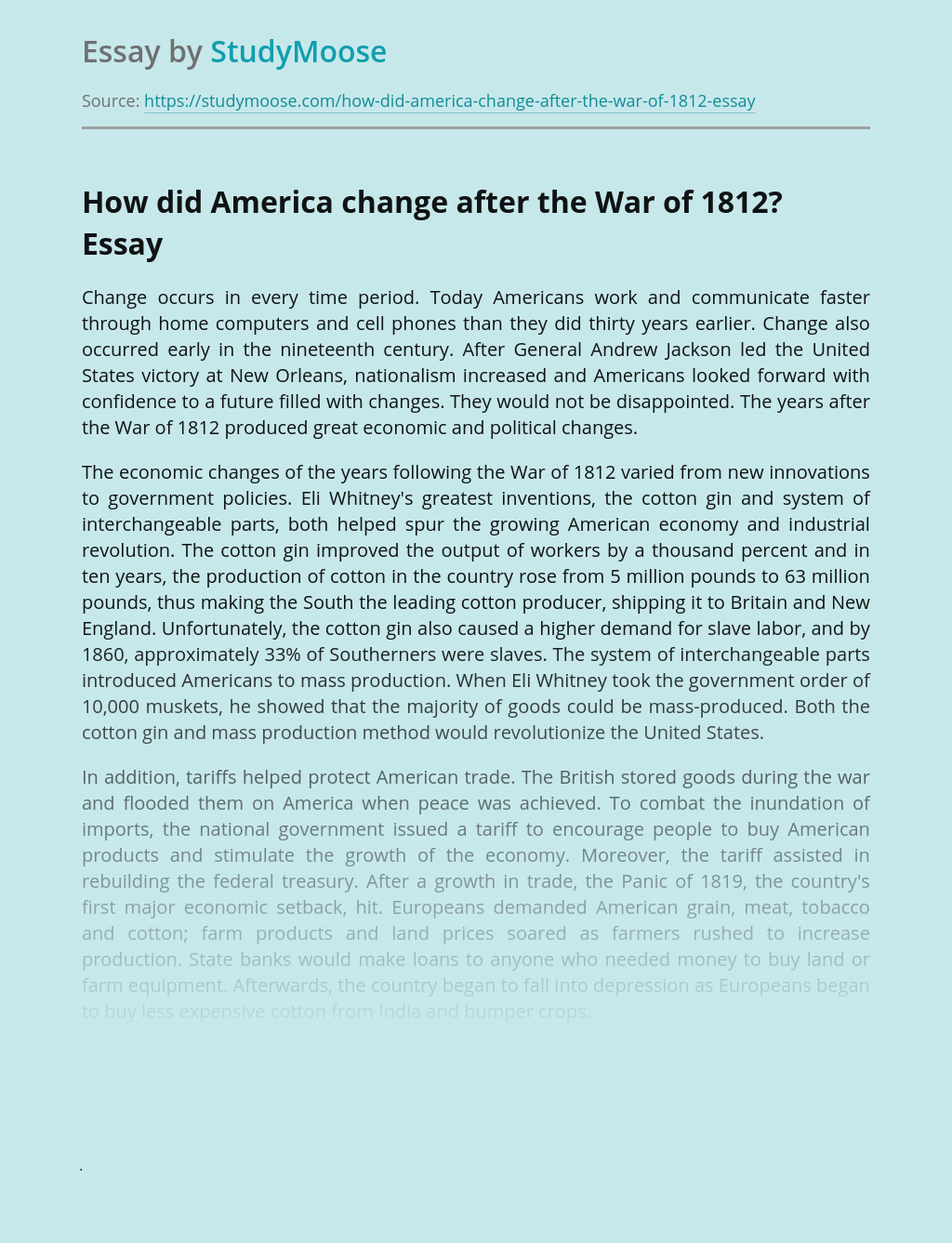 Turn in your highest-quality paper
Get a qualified writer to help you with
“ How did America change after the War of 1812? ”
Get high-quality paper
Helping students since 2015
Stay Safe, Stay Original