How Culture and Surroundings Influence Identity?

Cultural identity is a dynamic and a complex feeling and sense of belonging to one or more ethnic groups. It defines the way an individual identifies or positions himself or herself in different cultural contexts. In our modern society we are experiencing contact with different cultures like never before. As expressed in “If you are what you eat, then what am I” by Kothari, Down These Mean Streets by Piri Thomas, and Flight by Sherman Alexie. Kothari has her identity but tries to deviate around it with the type of cuisine she was eating, but only to find out that it was an impossible task for Kothari.

Don't use plagiarized sources. Get your custom essay on
“ How Culture and Surroundings Influence Identity? ”
Get custom paper
NEW! smart matching with writer

Piri has his identity also, but going through different environments and cultures has completely puzzled and influenced Piri’s identity which later on leads him in jail. Furthermore, Zits identity is influenced from birth due to the loss of his parents, he was raised in foster homes, but Zits didn’t react very well to them and soon just like Piri the theft and violent identity lead him to jail.

All the three characters experience a change for the better or the worse in there identity due to the there surroundings and what they experience around their surroundings.

Culture is something that surrounds all of us and progress to shape our lives everyday. But the real question is, what is culture? What is identity? How can it influence us? How does it outline us as human beings? Identity is illustrated as the state of mind in which someone or something distinguishes their own character traits that leads to determining who they really are, what they represent.

As of today, with the brisk increase in intercommunication and international travel, the people of today are experiencing inter-cultural contact that has never been accomplished before. That’s the reason why the research of culture and identity has risen a lot during the past couple of years. One way too view this research has been to observe how newcomers to foreign lands adapt to new cultural surroundings. Similarly, the study of Piri and Kothari when the they move to foreign lands and they have to adapt to the new cultural surroundings. They both divert from their real identity and become someone or something that they are not.

In “If you are what you eat, then what am I” by Kothari, she is in search for her true identity, but her identity is influenced just because of the type of food she chooses to eat. Kothari illustrates her struggles in true finding her identity. As Kothari mentions “…my mother buys the tuna hoping to satisfy my longing for American food Indians, of course, do not eat such things.” (923) This quote illustrates ethos as she is being influenced from her origin identity into someone or seething else that she is not, and the symbol to her influence is the tuna. This is one of many examples of Kothari being influenced by her surroundings. Indians do not eat such foods due to the religion. Many of them are vegetarians. Kothari explains that she is not from an American culture so her family doesn’t know what tuna looks like or what it is eaten with. If they were American they would have known. Kothari’s choice of food influences who she really is and what she will become, although this doesn’t last very long for Kothari. Her nature, culture, and influence while growing up brings her taste for Indian food and her true identity back. As many people would argue that there is no better feeling than retuning to the source of serenity, in this case returning to her Indian origin and cuisine.

Foods tend to frequently vary across different cultures and nations, they play a vital part in defining culture as well as identity. Each any every culture regularly observes their day by day foods as ordinary, yet these foods don’t frequently give us knowledge into a specific culture, but its rather how the outsiders view that culture specifically. Cultures can either influence or can be influenced by the foods they eat and the foods they consider to be mast; plus, everyday food can influence how the outside cultures picture that culture. Kotahri’s identity is influenced by the food she eats. When she eats American food, she feels and acts like an American as opposed to when she eats Indian she acts and feels like an Indian women. “A “pinch” means choosing not to draw attention to ourselves as outsiders, impolite visitors who won’t eat what their host serves.” Kothari proves to the reader that her and her sister basically have no choice when it comes to there identities. In order for Kothari to fit in she must eat the hosts food, therefore this slowly causing her to influence her true identity.

Piri’s identity and culture are influenced by his surroundings, and as well as the people he’s around with. His childhood years were spent in the Spanish Harlem, that’s where his violent perception is garnered from. His constant shift in location did affect his identity in many different instances such as racism and prejudice, the drug deals, the bloody fights all have shaped Piri’s identity. Piri explains to us the environment he is surrounded by as “I sure missed 111th Street, where everybody acted, walked, and talked like me. But on 114th Street everything went all right for a while.” (24) This quote clarifies that Piri’s identity is somewhat already shaped from street 111th. All the trouble and mischief Piri had learned from 111th Street has already swayed to an aggressive and a criminal identity. Piri’s identity can fluctuate very differentially when he is on the streets contributing to unconstitutional actions and very differently when he is at home with his family.

How Culture and Surroundings Influence Identity?. (2021, Mar 10). Retrieved from http://studymoose.com/how-culture-and-surroundings-influence-identity-essay 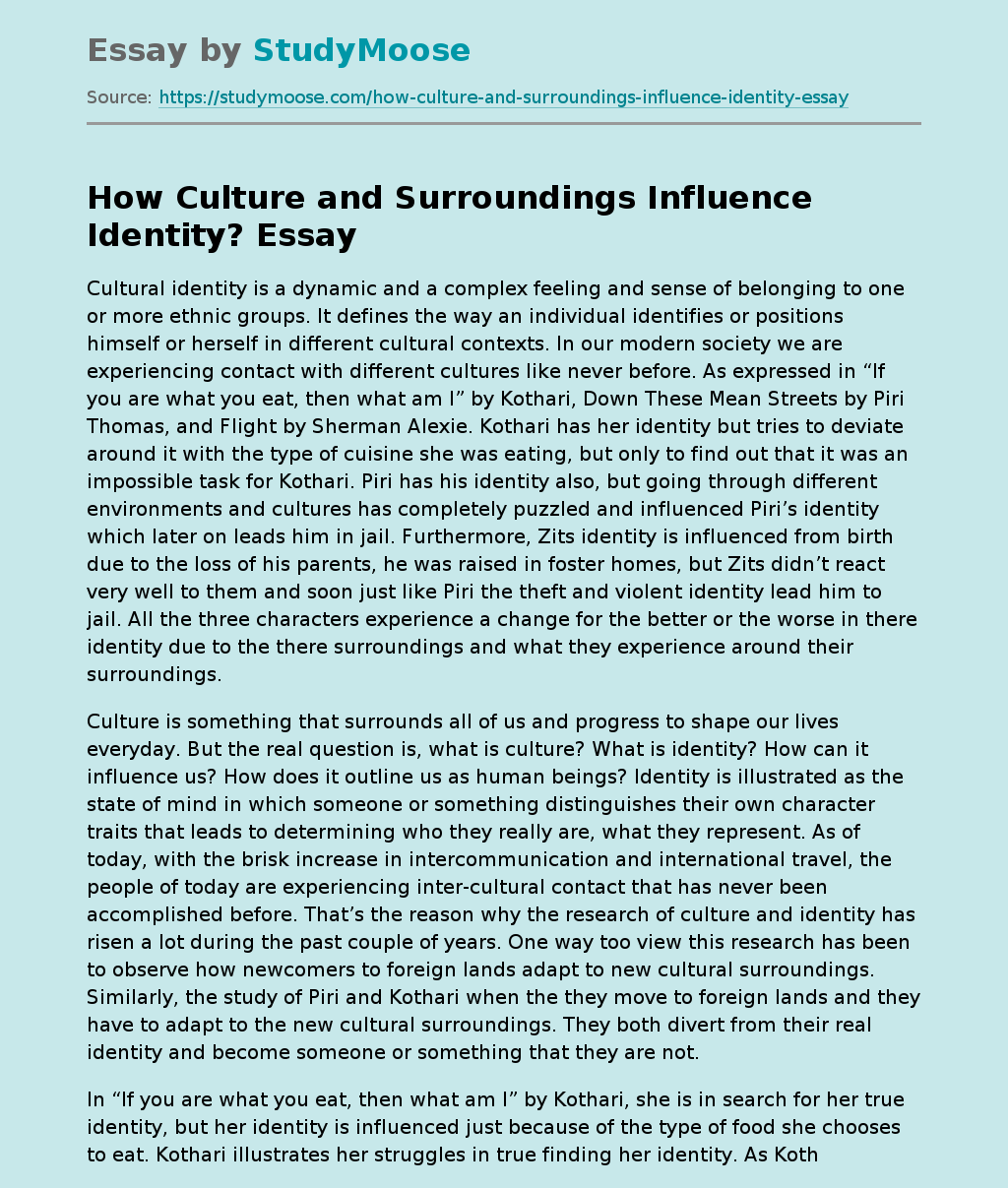