How and Why did Sushi Become Global?

Sushi being one of the popular sea-food dishes of Japan since decades. The main ingredients of sushi isare bits of pieces of fish wrapped in rice and seaweed with vegetables like mashed potatoes and ice. It all started by selling of tuna on a ramshackle wooden fish pier stand (BESTOR, 2009) in England, weighing from 270 to 610 pounds, where buyers (who were mostly Japanese) would examine their colourscolors and check fat content at the curve of their body. They would close the deal by giving their bids to the Dock Manager and he gives the highest bid to the member that landed the fish and then it would be packed to send to Tokyo for auction.

Don't use plagiarized sources. Get your custom essay on
“ How and Why did Sushi Become Global? ”
Get custom paper
NEW! smart matching with writer

The main reason for tuna dealing, which became global was the traditional flavoursflavors that was eaten by Japan which lead competition of selling it. As mentioned in the article in 1972, the famous New York’s Harvard Club promoted and advertised selling of sushi. It was seen that Americans preferred sushi rather than red-meatred meat.

Quoting the article — ‘Japan along with several other countries was later forced by the international environmental campaigns to cut back its all water fleets, hence cutting their fishing operations. However, Japan’s currency for sushi was growing immensely, so they had no other option but to spread their arms to overseas suppliers.’ According to me this was the major reason why sushi went global, as due to the restriction of water fleet there was a limited availability of tuna and that created a demand in the market, so other countries like New England started exporting Bluefin tuna to Tokyo with the help of Jumbo Jet and this led to boom in sushi business.

The evidence can be seen by the amount of sushi being imported to Japan that rise from 957 metric tons in 1984 to 5, 235 metric tons in 1993. However, in early 1990’s, the US Bluefin industry was taking of, but that time Japan economy falls drastically which led the US producers think that the demand for tuna will fall, but at that time the craze for sushi went up in North America, that saved the US producers for getting bankrupt and eventually, this led to Sushi being a global dish.

How and Why did Sushi Become Global?. (2020, Apr 29). Retrieved from https://studymoose.com/how-and-why-did-sushi-become-global-essay 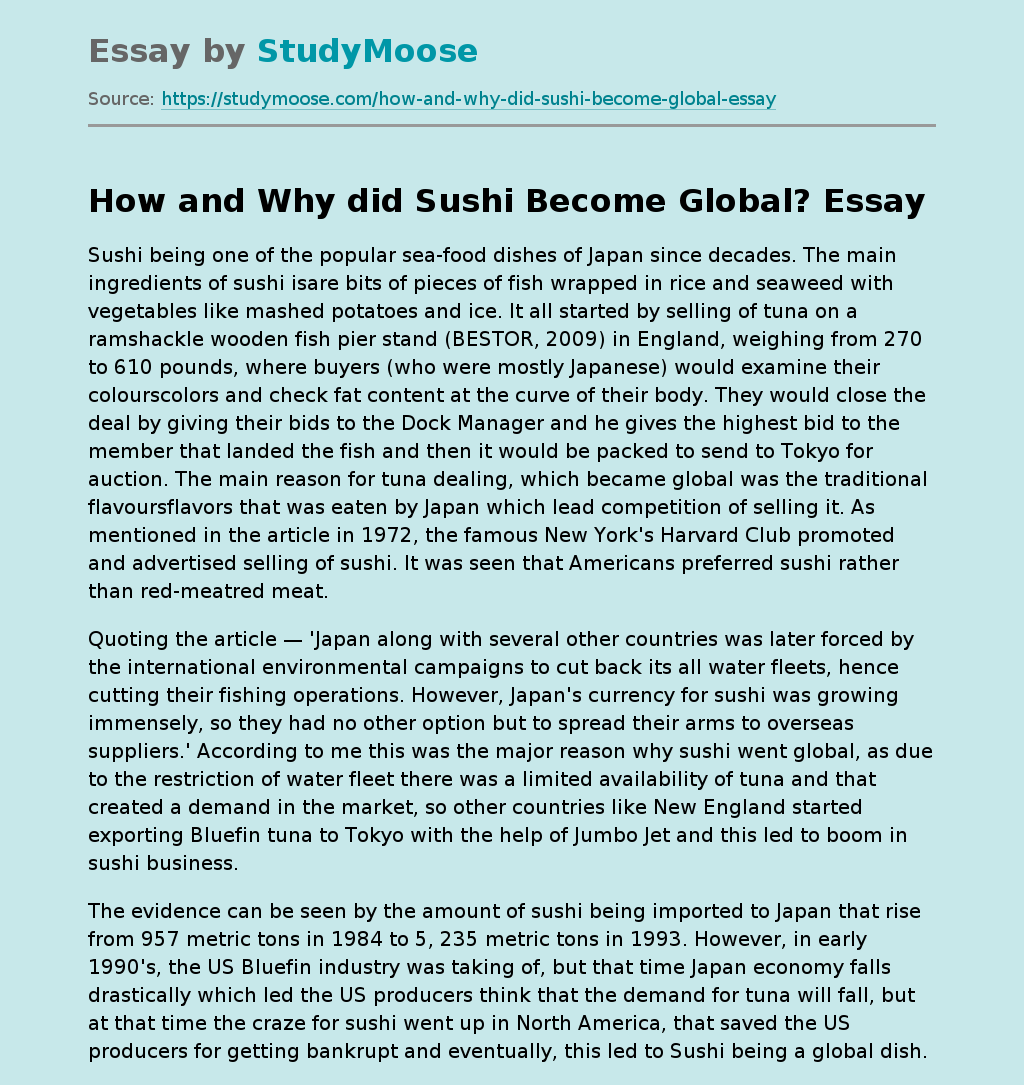