How America Has Changed Forever?

Americans to this day will never act or feel the same way as they once used to. What we did then and how we did it, we can no longer do now. It has been over twelve years since the United States went through one of the most horrific, terrifying tragedies in all of United States history. As we all know today, on September 11, 2001, Al-Qaeda terrorists hijacked four passenger airliners so they could be flown into buildings in suicide attacks. Two of those planes were intentionally crashed into the North and South towers of the World Trade Center complex in New York City.

Don't use plagiarized sources. Get your custom essay on
“ How America Has Changed Forever? ”
Get custom paper
NEW! smart matching with writer

For this reason, there has been an enormous amount of changes in the United States. The three major areas that have changed are the airport security, the government, and the psychological impact. Before the attacks on the World Trade Center, airports security was fairly simple. For instance, passengers only had to show your ID and passengers were allowed to bring sharp objects on board such as: penknives, box cutters, and sharp scissors.

Passengers were also allowed to walk through security with their shoes on, a belt on, or even a drink in their hand.

Whereas now, we have adopted a new form of security called the Transportation Security Administration. Security now stops you at every checkpoint and you have to show your ID. Also, you cannot carry sharp objects onto the plane. You now have to take off your shoes and belt, and have them ran through a metal detector.

Another key point is that passengers are not allowed to have liquids above 3. 4 ounces when going through the checkpoints. Special items such as laptops must be pulled out of the luggage.

One of the most noticeable changes is the need to arrive at the airport early. The United Airlines website, for example, suggested airport arrival times include this recommendation for Los Angeles International: “Customers with checked baggage should arrive 2 hours before flight departure. ” Due to the excessive wait at security, an early arrival is necessary. The airport security was not the only factor the United States enhanced, but the government as well also made changes.

Due to the attacks, for this reason, the United States adopted the Patriot Act. The purpose of this act is to: deter and punish terrorist acts in the United States and around the world, enhance law enforcement investigatory tools, and for other purposes. There were also more than one hundred and thirty pieces of legislation introduced that related to the attacks during the first year. Such as: the Aviation and Transportation Security Act, the Enhanced Border Security, and Visa Entry Reform Act.

To be sure to stop another tragedy happening, the government created agencies after the attacks that include the Department of Homeland Security, which consolidated other agencies, including the U. S. Immigration and Naturalization Service. The last significant change that the United States has faced since the attack is the psychological impact on how we Americans view immigrants. To put it another way, some Americans responded with fear, anger, as well as a growing intolerance for immigrants, especially against those who are or appeared to be from the Middle East.

For this reason, many Muslims and Asians in the United States reported that they were the victims of harassment and hate crimes days after the attacks. In fact, some Muslims were shot and killed only because of their race. Not only were people shot, people were also targeting institutions that related with the Islamic faith. Mosques were attacked as well as other religious buildings, including a Hindu temple in St. Louis, Missouri. Anger and fear are not the only psychological consequences that we Americans have faced, but also posttraumatic stress disorder.

According to figures from three New York City 9/11 health programs, at least 10,000 police officers, firefighters and civilians directly exposed to the World Trade Center attacks have been diagnosed with posttraumatic stress disorder. Twelve years later, we Americans are still impacted from this tragedy. We will always be emotionally distraught, nor we will ever get back the loved ones that have passed away in the tragic incidents. On the positive note, the government passed many regulations to make sure that there will never be a 9/11 repeat.

How America Has Changed Forever?. (2018, Aug 23). Retrieved from https://studymoose.com/how-america-has-changed-forever-essay 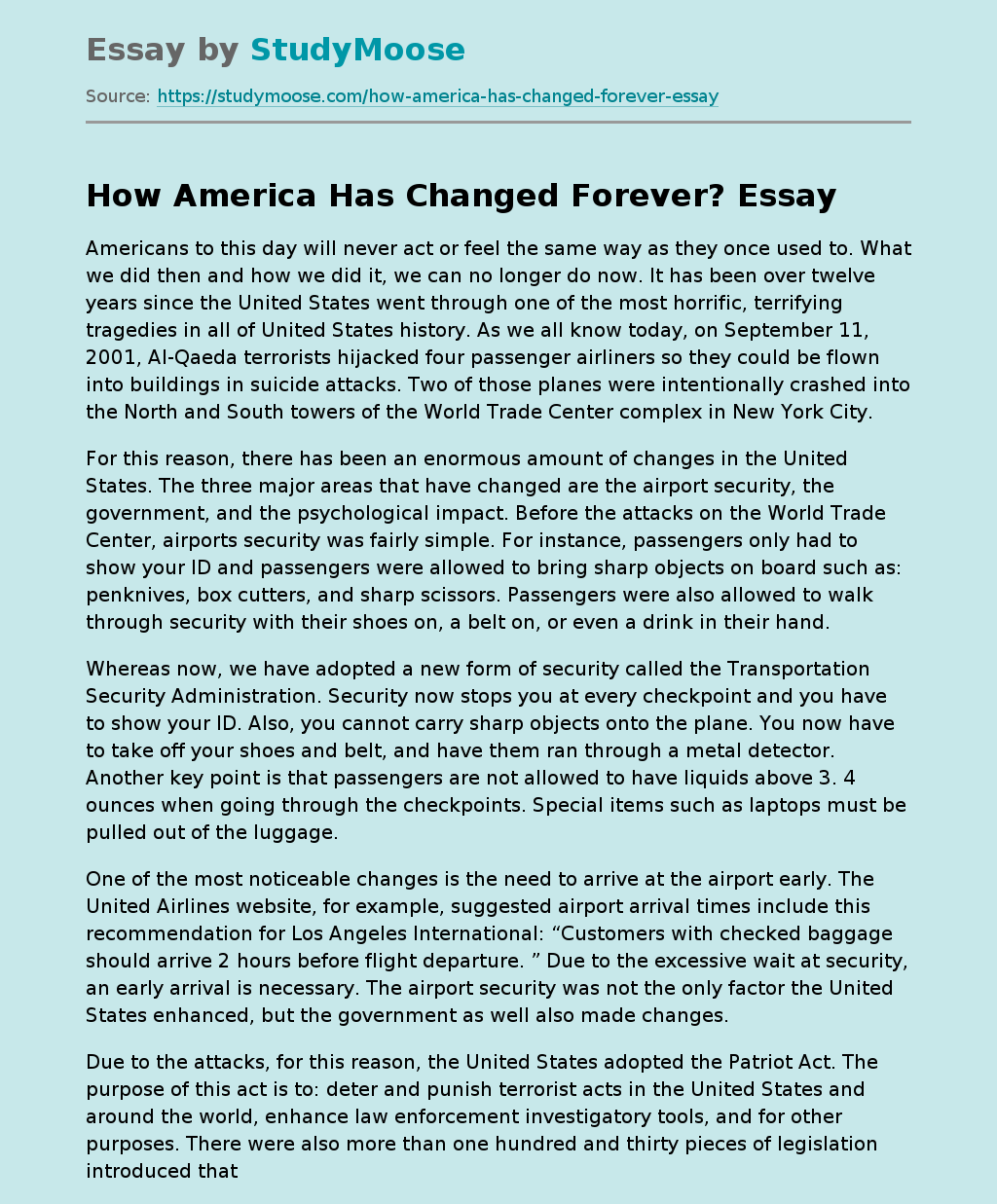