House of the Scorpion Essay Quotes and Topics

Essay 1 If you didn’t have friends, would you be able to live a valuable and meaningful life? Friendship is a very valuable thing because it can get people through the hardest of times, as shown in Nancy Farmer’s House of the Scorpion, where the reign of El Patron over his country, Opium, is overthrown by his own clone, Matteo Alacran, with the help of his few friends, whom he keeps through loyalty and compassion. “Tomorrow he would begin the task of breaking down the empire of Opium.

Don't use plagiarized sources. Get your custom essay on
“ House of the Scorpion Essay Quotes and Topics ”
Get custom paper
NEW! smart matching with writer

It was a huge and terrifying job, but he wasn’t alone.” “Everything was ready for me. Tam Lin gave me maps and food and showed me how to climb mountains. I didn’t understand. I didn’t want to understand.” “He felt a whisper of fear as he walked into the mountains. This time he was alone.”

Essay 2 If you were treated differently just because of classification, would you like it? Nancy Farmer attempts to convince readers that one should not treat another as inferior just because he or she is different in her book, House of the Scorpion, where Matteo Alacran, a clone, is treated differently, but is otherwise the exact same as other people.

The theme of Nancy Farmer’s House of the Scorpion is that one should not treat another as inferior just because he or she is different, and she explains this theme by showing that Matt can do what every other person can do, including love and hurt.

“‘You idiot! You need a vet for the little beast!’ the man roared. ‘How dare you defile this house?’”

Essay 3 Women can be a lot of things. A lot of women are nice, some are mean, but a woman is only what you perceive her to be. The women that Matteo Alacran, the main character in Nancy Farmer’s House of the Scorpion encounters affects him in both positive ways and negative ways as some of his experiences are prejudice, and some are hospitality.

“Either you press that scorpion and we escape together, or we stay here and starve together. I’m not leaving you! Not now or ever!” “Celia immediately knelt down and put her arms around him. ‘Don’t cry, mi vida. I love you more than anything in the world. I’ll explain things to you when you’re older.’” “The house was so lonely without Celia singing, banging pots, or talking about people he had never seen and never would see.” Essay 4

What if you, a normal human being, were treated like an animal just because the government calls you something? Would you like that? Matteo Alacran, the main character in Nancy Farmer’s House of the Scorpion is a human, just like everyone else because he can act like a normal human being and do what every other person is able to do, like cause and experience pain, think, and love. “Even so, the ability to create music filled him with a joy too large to contain. He forgot where he was. He forgot he was a clone. The music made up for everything.” “But Tam Lin had called Matt a human and expected much more from him.

Humans, Matt realized, were a lot harder to forgive.” “No one can tell the difference between a clone and a human. That’s because there isn’t any difference. The idea of clones being inferior is a filthy lie.” “Any rat in a sewer can lie. It’s how rats are. It’s what makes them rats. But a human doesn’t run and hide in dark places, because he’s something more. Lying is the most personal act of cowardice there is.” “He wasted no tears on the Alacráns or their slaves Felicia, Fani, and Emilia. But he wept for El Patrón, who deserved pity less than anyone but who was closer to Matt than anyone in the world.” “What Matt hated about the creature was everyone’s assumption that he and Furball were the same. It didn’t matter that Matt had excellent grades and good manners. They were both animals and thus unimportant.” “He grabbed Chacho and pulled him back. ‘We mustn’t kill him!’ ‘Why not?’ demanded the boy.”

Essay 5 In Nancy Farmer’s book House of the Scorpion, environment affects how Matteo Alacran, the good-doing protagonist and clone of El Patron, the evil antagonist, behaves because you can choose which path in life to take, and other people influence your decisions. Furthermore, if genetics decided if you were evil, then both Matt and El Patron would be evil because Matt is El Patron’s clone. “When he was young, he made a choice, like a tree does when it decides to grow one way or the other. He grew large and green until he shadowed over the whole forest, but most of his branches are twisted.”

“‘Give things away? I can’t believe I heard that! What have they been teaching you?’ ‘It was only a suggestion,’ Matt said, aghast at the reaction he’d provoked.” “El Patrón laughed. “That’s the stuff, Mi Vida. Get rid of your enemies when you can. I don’t like Tom either, and dinner will be better without him.”

House of the Scorpion Essay Quotes and Topics. (2017, Feb 11). Retrieved from http://studymoose.com/house-of-the-scorpion-essay-quotes-and-topics-essay 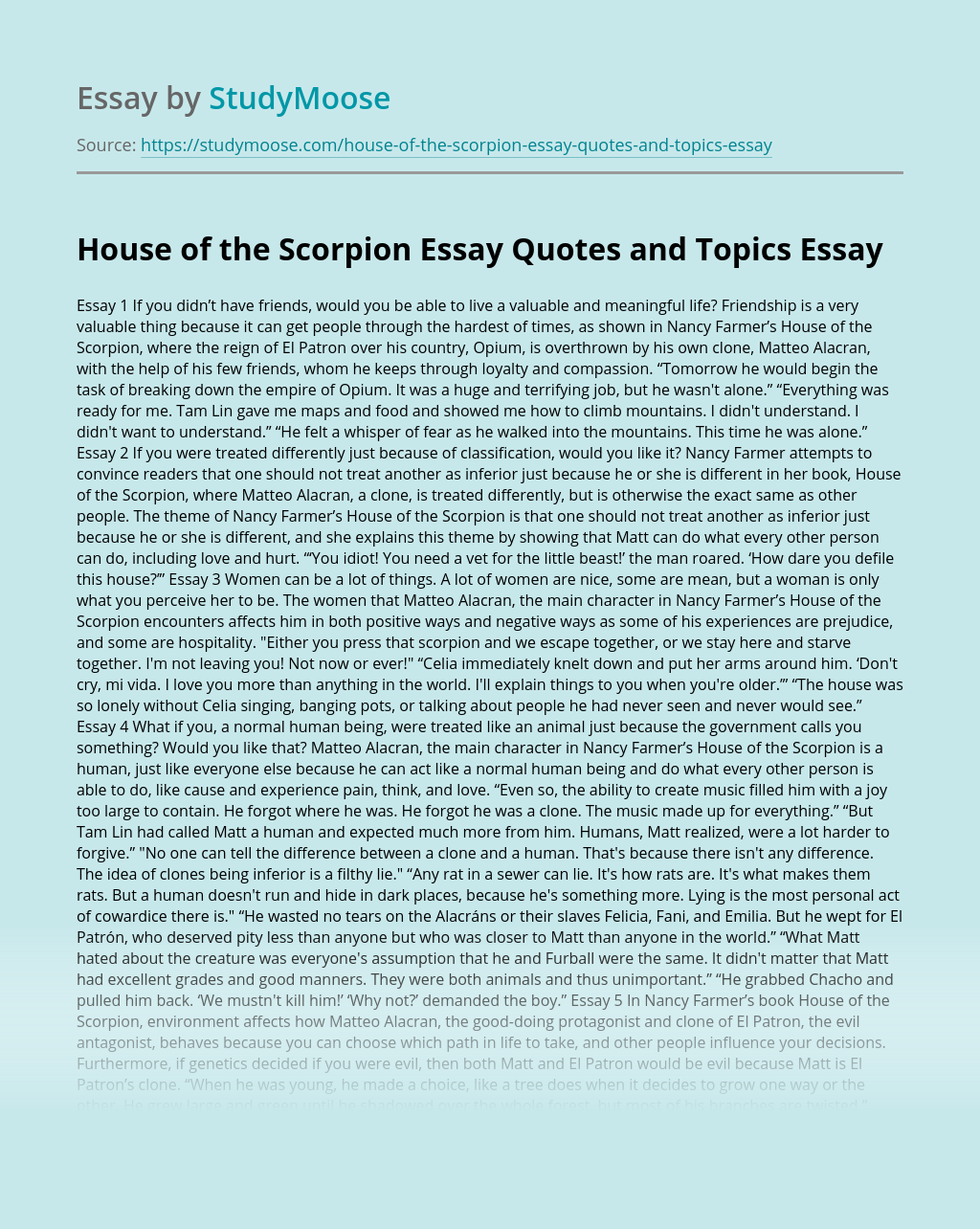