Hound of the Baskervilles

It describes the man as “high blooded, fiery and masterful”; this helps the reader relate it to Hugo Baskerville who started the curse. As they travel further they describe the moor as “forbidding”, and the use of forbidding is used to show danger. Danger and forbidding can be linked to the curse, and as the moor is forbidding it shows signs that they should turn around. The atmosphere is now thrilling and gloomy. Sir Arthur Conan Doyle states “difficult and dangerous quest”, this relates to the case and shows that it will involve consequences and “dangerous” leads the reader to believe something bad, untoward will happen.

Don't use plagiarized sources. Get your custom essay on
“ Hound of the Baskervilles ”
Get custom paper
NEW! smart matching with writer

The general feeling of the case seems to be changing as in London, Sherlock Holmes thought of it as another normal case, but in the moor it is said to be “difficult” and “dangerous”. The reader is now beginning to paint a picture or form a mental image of the hostile environment.

“Noisy stream” shows that the peaceful, quiet countryside had gone, now using sound he shows that it the countryside is restless, using words like “roaring and foaming” he illustrates that loud noises surround them.

“Roaring and foaming” may also represent the dog as the hound howls and has saliva dripping from its mouth, this also relates to the “dripping moss”. As they enter the moor it states, “rotting vegetation-sad gifts”, this can be compared to the countryside as they were pleased by the “luxurious vegetation” but now it is “rotting vegetation”, this changes the atmosphere to old and dead.

As they near the end of the moor they see a “dark and stern” soldier, this shows that the moor is not safe, as it has a soldier protecting it. When young Baskerville states, “convict escaped”, it sets an uneasy atmosphere, as people are scared and worried. Also a convict escaped relates to the hound as two killers are on the loose. Sir Arthur Conan Doyle relates the Notting Hill murderer to our hound and uses various statements to describe him. “Brutality” and “assassin”, they are both words the reader could associate with the hound who killed various people.

The atmosphere changes to dangerous and dark.

The atmosphere now reflects on the mood of young Baskerville and the scenery around the moor. The atmosphere should also change the reader’s views as the lush green countryside was seen as peaceful whilst the moor is the opposite. As they grow close to Baskerville Hall the atmosphere gets darker as the author mentions a “darking sky”, this sets the atmosphere for the rest of the chapter, as they do not turn back. “We looked back”, this shows they wanted to go back to the countryside where they feel safe, but they venture on.

This can also demonstrate that Sherlock Holmes may see the case as dangerous. The passenger’s imagination reminds them off the lushness of the countryside as it states “red earth turned by the plough”. The contrast between the countryside and the moor may be seen as heaven and hell. The countryside was peaceful but the moor is noisy. Also in the countryside everything is safe, but arriving on the moor with escaped convicts and the curse of the Baskervilles, everything is alive and immediate. People see heaven as peaceful and hell as the opposite. Sir Arthur Conan Doyle uses this to make readers feel uneasy.

Hound of the Baskervilles. (2020, Jun 02). Retrieved from http://studymoose.com/hound-of-the-baskervilles-6417-new-essay 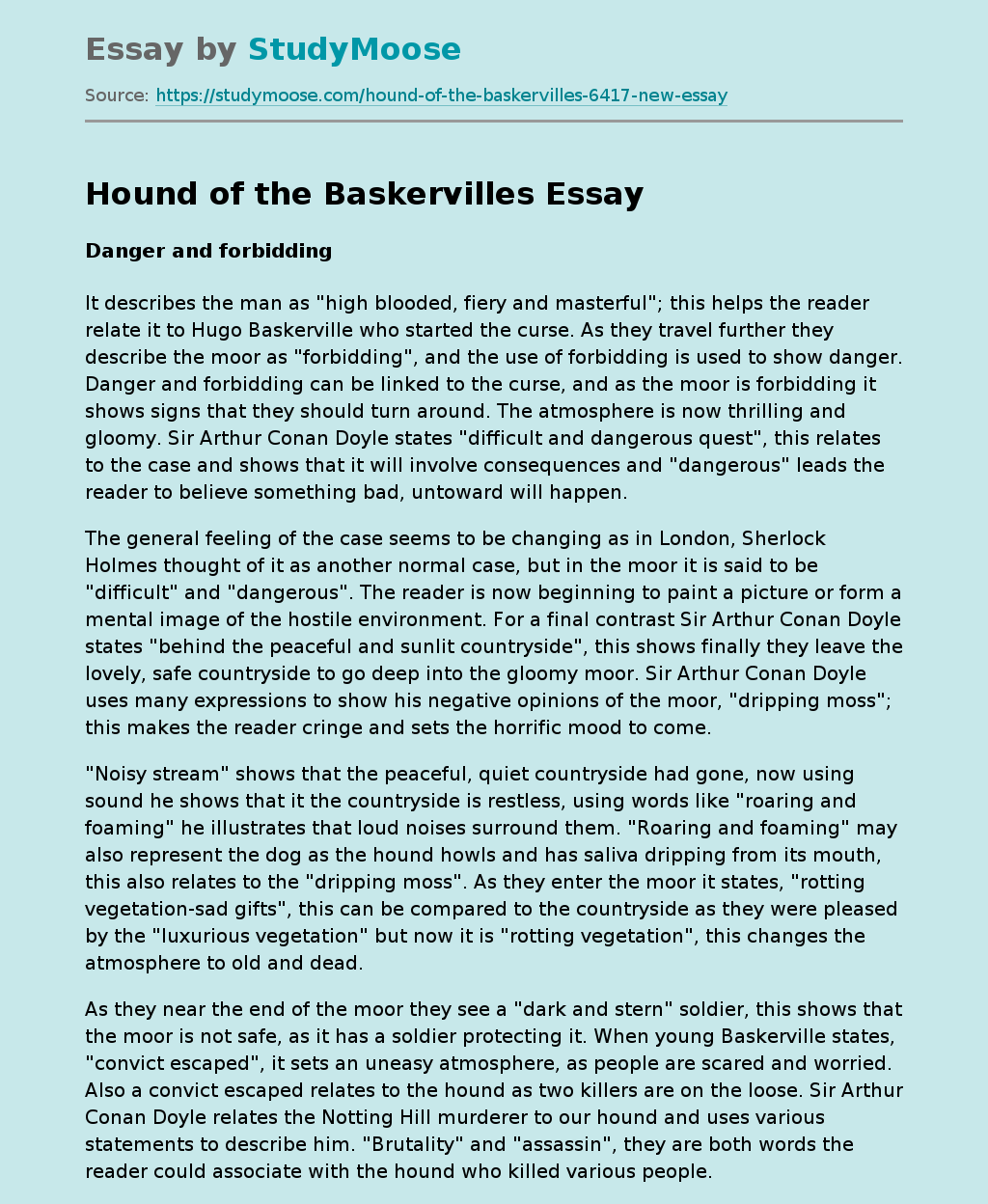