Horror Novel The Turn of the Screw

Wayne C. Booth tries to describe how criticism sometimes seems to embrace a clear notion of how different stories have a significant impact on individuals. In fact, he says that people sometimes try to imitate any character or behavior of the story, especially if the story asks to admire the behavior presented(Booth, 290). According to Wayne C. Booth, he figures out a strong connection between how an attitude, knowledge and the experience of a reader can affect their reader response. The reader may be connected to a story because of their past, or their interest, which would result in how their response or interpretation of the story may be.

Don't use plagiarized sources. Get your custom essay on
“ Horror Novel The Turn of the Screw ”
Get custom paper
NEW! smart matching with writer

Booth’s reader response gives a convincing and rather accomplished study on the story the turn of the screw, by presenting three categories with different understandings that a reader may acknowledge and critique.

This paper will demonstrate in detail the reader response of by Wayne C. Booths, and his three distinct categories the straight, Ironic, as well as the mazed.

Booth explains how readers share the same emotions when understating “basic facts” such as the plot and the characters of the story. Booth’s reader response is illustrated in organized sections. Sections one, two and three explain how Booth reader response, and how people critic and have their reader response.

Booth’s criticism in section one mentions how the reader response is reviewed from the “ethos” which is the character, where he strongly emphasizes that a reader should have ethical l background to be able to critic a story, and give it a “bad, or good” response.

He also emphasizes that using “ethical criticism” (289) is sometimes hard especially when paired with the answers evoked from a person readers by The Turn of the Screw, leading to a variety interpretations (290-92). Booth also highlights on gender, and how women might view the text different than men, as well as how criticism helps writers be aware of how their story sounds to the reader. The importance of education is a big factor to readers response criticism. Booth mentions how Plato’s first work “the Republic” which was written to emphasize the importance of education, further explaining how some books can “miss educating” people because their content might be inaccurate. Readers might understand the information differently, either in the negative or positive way. The following quote by Booth defines how a reader might take in the education in the story. “Do I think of this story as a valuable gift from the author to me and my friends or do I think of it as some kind of disguised poison” his thought on how an audience can preserve the knowledge taking it as a “gift” that is helpful to experience, or a “poison” that can kill. I strongly agree with the importance of education, when it comes to critiquing someone’s work. “They can teach students that literary texts have a degree of autonomy, but that only means introducing what students already understand as readers about the new material of literature to these content that new and more comprehensive formulations of their meanings will be derived and the process of literary education will be furthered.” (Booth, 289)

In section two booth highlights a couple of interesting points about what a reader feels when reading the turn of the screw especially whether they believe in ghost or don’t believe in ghosts, and he helps us understand that by three categories. Booth’s reader response gives a convincing and rather accomplished study on the story the turn of the screw and the ghosts involved in it, by presenting three categories with different understandings that a reader may acknowledge and critique. Straight, Ironic, as well as the mazed, are specific ways to understand how a reader read the turn on the screw. These various interpretations as well as the prospect of a “non-truth,” as upheld by “mazed” readers, tries to reinforce Booth’s proposal that the reading of the content or criticism must offer some value for the reader, because, without value, there would be no need to have a lot of arguments and analyses based on James’s story (298-99). In fact, the value not only lies in critical argument alone, for debate can primarily offer salient educational value to the reader (Booth 299-300). Booth explains how readers share the same emotions when understating “basic facts” such as the plot and the characters of the story. I find the three categories very interesting and strongly agree with them(Booth, 299-301).

Booth presents three different and specific ways of explaining and interpreting the Novel, The Turn of the Screw. They include; straight, mazed, as well as ironic (292). He offers particular examples of each method by explaining the interpretations and how it’s applied. First, straight involves literal reading and does not present or question the facts as they are explained in the book. The ironic on the other hand is highly skeptical and emphasizes primarily on discrepancies in the context, and finally, the “mazed” interpretation involves approaching the text with the anticipation of failures as well as confusion in trying to understanding because of the undefined truth of the story(Booth 292-97). Structurally as well as methodologically, I would say that Booth displays a persuasive argument. In fact, he utilizes well-executed and defined transitions in his entire criticism context.

Wayne Booth also presents three primary sections that show a clear and precise theme and also offer an extensive explanation of the central question. In the presentation terminology, Booth offers a unique example of how the information should work in the literary perspective of reader-response criticism and puts more emphasizes on how it reflects his salient ideas. For example, the differentiation of reader explanation and interpretations—straight, ironic, and “mazed” (Booth 292)—are well explained and provides a platform for his conclusion. Booth’s conclusion, though a bit dramatic with the fact that discussing as well as reading criticism could assist one “read” his friends (301), is convincing. In fact, his interpretation of exclamations and how they are connected to a value in The Turn of the Screw gives the conclusion a compelling and engaging manner. Booth also supports the general idea of reader-response criticism as he helps the reader to fully understand the importance, purpose, and interpretation of The Turn of the Screw.

Horror Novel The Turn of the Screw. (2021, Apr 15). Retrieved from https://studymoose.com/horror-novel-the-turn-of-the-screw-essay 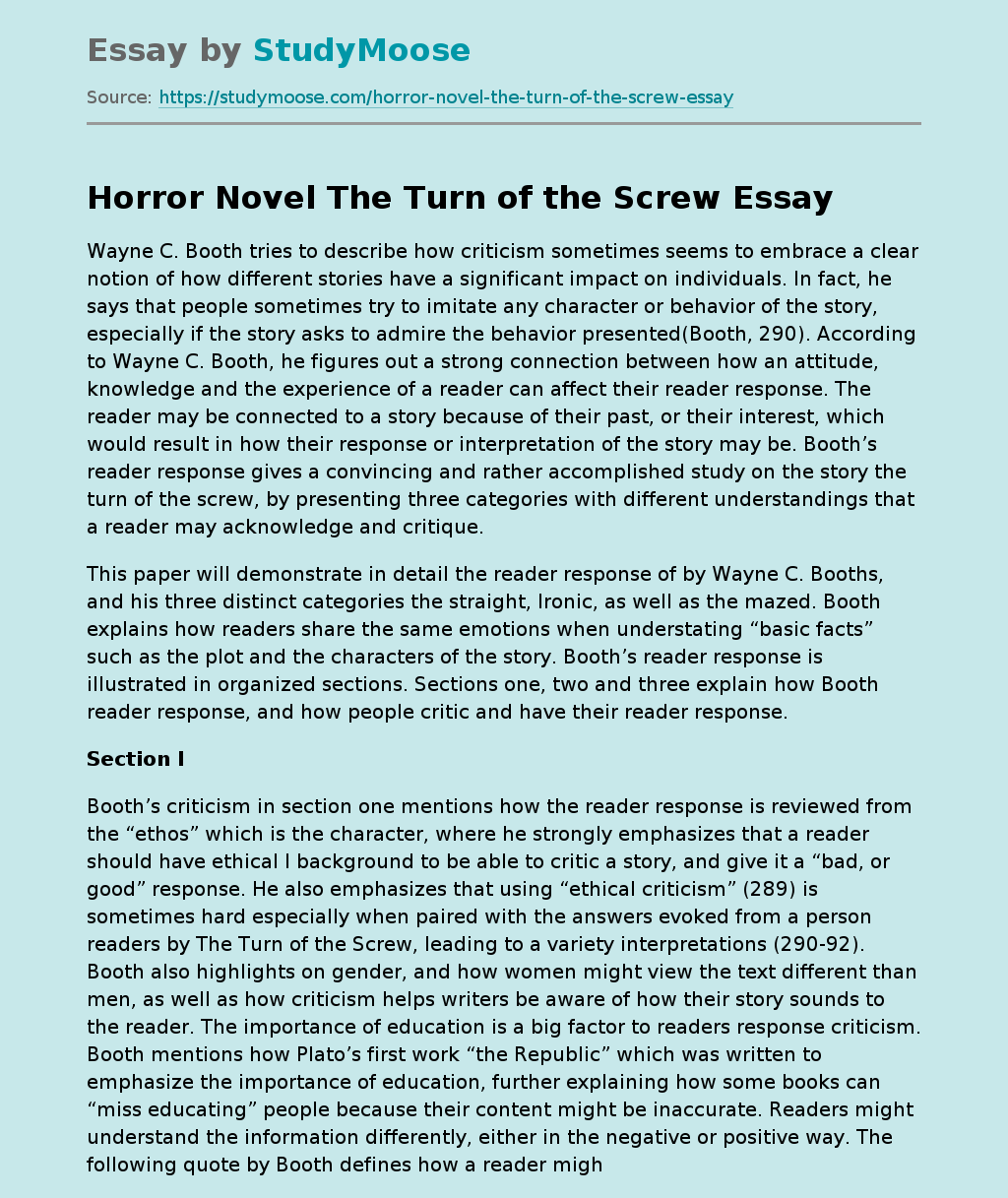