Honesty in Pride and Prejudice and A Doll's House

Henrik Ibsen’s A Doll’s House and Jane Austen’s Pride and Prejudice are set in similar time period and feature protagonists who go through different struggles, but whose themes have some overlap. Honesty is a theme that is played out in both stories resulting in opposite consequences for the protagonists. The power of honesty can either hurt or enhance lives. The truth means ruination in Nora and Torvald’s marriage in A Doll’s House whereas the truth brings Elizabeth and Darcy together in Pride and Prejudice.

Don't use plagiarized sources. Get your custom essay on
“ Honesty in Pride and Prejudice and A Doll’s House ”
Get custom paper
NEW! smart matching with writer

Honesty in both male and female protagonists is equally important in forging good relationships between each other.

In both stories, strong honesty shapes the two couples’ fates. Both novels begin with the dishonesty of female protagonists – one who has lied to her husband for eight years and one who keeps denying to herself her feelings about a man. Nora, the female protagonist of A Dolls’ House, seems happy about her marriage to Torvald.

She does not seem to mind Torvald treating and patronizing her like a doll. However, Ibsen foreshadows Nora’s dishonesty with the very first word on the first page of the play: “Hide the Christmas tree away…(1)”, and Nora’s action is eating macaroons and lying to Torvald about it.

She also acts like an impulsive and dependent child to Torvald as if she is hiding something, which is her knowledge of her business details – debt – that she acquired to loan in order to save Torvald’s life. Elizabeth, the female protagonist of Pride and Prejudice, is a young, intelligent woman whose virtue and independence enable her to overcome the bounds of social class and harsh society.

However, her course of making rash and imprudent judgment often leads to her failure: she prejudged Darcy’s personality as the most “proud and conceited (11)” after only meeting him once.

She hated everything about him based only on her prejudgment. As a result, she was not able to admit her inner affection toward him and kept denying her true feelings about him. Although Darcy proposes to Elizabeth in a most honest and gentle manner – though indirectly insulting her family and status – Elizabeth replies only with lies: “From the very beginning, from the first moment,…fullest belief of your arrogance, your conceit, and your selfish disdain,…which succeeding events have built so immovable a dislike; and I had not known you a month before I felt that you were the last man in the world whom I could ever be prevailed on to arry (166). ”

Elizabeth’s dishonesty to Darcy and to herself is the major obstacle to understand each other. Fortunately, Elizabeth’s mind starts to change as she learns about the truth of Darcy, but on the other hand, when Nora decides to reveal the truth, only disaster awaits her. Although Nora and Elizabeth both started as dishonest, they both decide to reveal and admit the truth that they must affront. Nora has been hiding the truth for several years from her husband because Torvald disallows anyone to make debt.

However, she decides to test the truth of her husband’s love by revealing the truth of herself. Nora, who has been a doll of Torvald, is no longer a “little sky-lark chirruping” or a “pretty little pet” as her husband calls her. Her decision to confront the truth shows how ambitious, determined, and courageous a woman she is. Elizabeth, who has been trapped by her own prejudice, finally awakens and becomes honest to herself: she admits that she loves and feels compassion for Darcy.

“How despicably have I acted! … prided myself on my discernment! how humiliating is this discovery! Had I been in love, I could not have been more wretchedly blind… but vanity, not love, has been my folly… Till this moment I never knew myself. (178-179)” When Elizabeth acknowledges the truth about herself, her prejudgment vanishes. She allows herself to look back at what she has done and realizes her mistake in the relationship with Darcy. Both Nora and Elizabeth have changed since the beginning of the novel. They discover the importance of honesty in marriages and relationships despite experiencing different results.

The two contrasting consequences not only depend on Nora and Elizabeth’s honesty, but also depend on their spouses. Nora believed that Torvald would understand her dishonesty because she trusted his love. However, when Torvald learns about the blackmail, Nora and Torvald’s marriage falls apart: “Miserable woman…who was my pride and joy… a hypocrite, a liar, worse than that, a criminal! …they [people] might even think I was the one behind it all, I who pushed you…I’ve taken such good care of you…done to me?… you’ll go on living here…you will not be allowed to bring up the children, I can’t trust you with them (75-76).

In this moment of truth, not only Nora but also Torvald shows his true color. In order to keep his pride and reputation, he makes Nora live with him and pretends that they are married. Even worse, when Torvald receives the IOU letter back, he suddenly hides his true color, as if nothing has happened after he had said horrible words to Nora: “We are saved, Nora! …I forgive you everything. I know you did what you did because you loved me. (77)” Nora “understands” the truth of Torvald after revealing the truth of herself. She learns that Torvald’s love is not genuine, and their marriage has been fake and artificial.

Nevertheless, honesty in Pride and Prejudice empowered Elizabeth and Darcy’s relationship. Although Darcy’s first proposal to Elizabeth was not successful, he tries once more as he writes a letter with honesty. “…may be offensive to yours, I can only say that I am sorry…I believed it on impartial conviction, as truly as I wished it in reason…pardon me, It pains me to offend you (169-170). ” In this honest letter, he apologizes for the past arrogance and misinterpretation in Jane – Elizabeth’s sister – and Bingley’s – Darcy’s intimate friend – relationship.

Honesty does not always triumph; it can also worsen a situation. In A Doll’s House and Pride and Prejudice, both women learn that they also have to be honest with themselves, not only with other people. They also see the ultimate consequences in relationship will also depend on their spouses, not only on herself. Although both women were equally honest, perhaps Elizabeth was more fortunate than Nora in her choice of spouse and in finding the opportune moment to be honest, which allowed her to forge a fulfilling and sustained marriage.

Honesty in Pride and Prejudice and A Doll's House. (2017, Mar 02). Retrieved from https://studymoose.com/honesty-in-pride-and-prejudice-and-a-dolls-house-essay 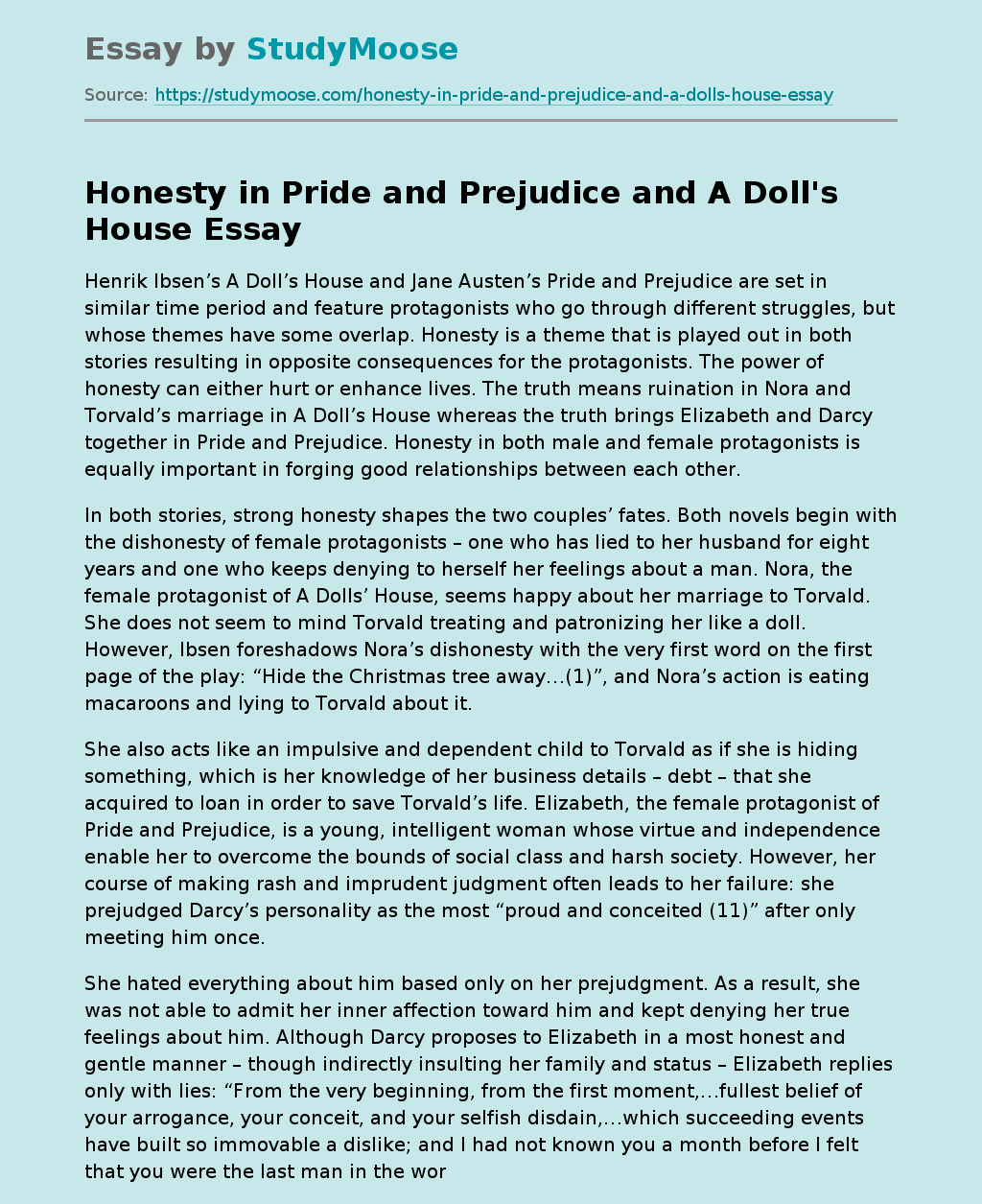