Homeostatic imbalance is the disturbance of normal homeostasis in the body. This paper is on the disease of gout caused by a homeostatic imbalance. Due to the kidney’s inability to filter uric acid it starts to build up in the joints and cause pain, tenderness, redness, warmth and swelling in the joints. Gout usually attacks the joint of the big toe, but it can also attack the joints in the knees, ankles, feet, hands, wrists and elbows. Unfortunately, there is no cure for gout, but with medication and a proper diet, people with gout can learn how to have a fulfilling life.

This paper will discuss the treatment for gout, as well as, the homeostatic control mechanism that is imbalanced and whether negative or positive feedback is involved.

Many diseases are caused by homeostatic imbalance, which is a disturbance of normal homeostasis. Human homeostasis refers to the ability or tendency of an organism or cell to maintain internal equilibrium by adjusting its physiological processes (Homeostasis, n.

d.). The inability of the body to assert homeostasis may lead to death or disease, examples are diabetes, dehydration, hypoglycemia, hyperglycemia, gout, and any disease caused by a toxin present in the bloodstream, which is a condition known as homeostatic inconsistency.

I will discuss the causes and symptoms of gout. As well as, the homeostatic control mechanisms that is imbalanced and why it is imbalanced, whether negative or positive feedback is involved, what is medically necessary to restore balance and what the prognosis is.

Gout is a type of arthritis caused by a build-up of uric acid in the joints. This can be caused by the kidney’s inability to filter uric acid out the bloodstream or the body’s inability to process a type of protein called purines (Gout, 1999). The most common symptom of gout is sudden, severe attacks of pain, tenderness, redness, warmth and swelling in some joints. Usually gout affects one joint at a time, especially the joint of the big toe, but it can also affect the knee, ankle, foot, hand, wrist and elbow. People with gout usually have lumps appear under the skin and at the rim of the ear caused by deposits of uric acid, also called tophi. In addition, uric acid crystals can build up in the kidneys and cause kidney stones (Gout, 1999). Some more severe symptoms that can result from gout is acute gout attacks, kidney damage, severe arthritis, joint immobility, urinary stones, scleritis, carpal tunnel syndrome, arthropathy, neutrophilia and pyrexia.

Unfortunately, there is no cure for gout, but people that have gout can learn how to keep it under control. The symptoms of gout are normally treated by medications, such as nonsteroidal anti-inflammatory drugs (also known as NSAIDs), colchicine, corticosteroids and allopurinol (Gout, 1999). NSAIDs are drugs that block prostaglandins, which are the substances that dilate blood vessels and cause inflammation and pain (Gout, 1999). Colchicine is a drug that can relieve the pain and swelling that is caused by gout and can help prevent future attacks (Gout, 1999). Corticosteroids may be used if the person cannot tolerate NSAIDs (Gout, 1999). Allopurinol blocks uric acid production and is the drug that is most often used in long-term treatment in older patients and those with higher levels of excreted uric acid (Gout, 1999).

The homeostatic control mechanism that is imbalanced in gout is the uric acid amount in the bloodstream. Uric acid is a product of the breakdown of purine bases that compose DNA. As cells die and release DNA from their chromosomes, purines are converted into uric acid which is excreted into the urine and the intestines (Clarke, 2010). The level of uric acid dissolved in the bloodstream is directly related to this delicate balance between uric acid production and excretion (Clarke, 2010). Some people may also have an elevated blood uric acid level from eating certain foods, such as beer and other alcoholic beverages, anchovies, sardines canned in oil, fish roes, herring , yeast, organ meats like liver, legumes like dried beans and peas, mushrooms, spinach, asparagus, cauliflower, and poultry (Gout, 1999). The symptoms of gout are a positive feedback. The definition of positive feedback is feedback that results in amplification or growth of the output signal (Positive Feedback, 2010).

The symptoms of gout are positive feedback because the pain and inflammation are caused by the excessive uric acid in the bloodstream, as a result, the body responds by inflaming the joints. Because it can take up to twenty years of more of hyperuricemia, the condition that causes gout, men usually don’t develop gout until they reach their late thirties or forties and women usually don’t develop gout until after menopause because estrogen is known to protect against hyperuricemia (Frey, 2005). So, once estrogen levels begin to fall during menopause, it leaves a woman open for urate crystals to start accumulating (Frey, 2005).

The definition of prognosis is a medical opinion to the likely course and outcome of a disease (Prognosis, n.d.). More than 50% of the people who have had a gout attack will have a second attack within six months to two years (Gout: Prognosis, 2006). There is long-term preventive medication that is highly effective at lowering uric acid for people with more severe attacks, which can prevent attacks and, over months or even years, it can cause tophi to go away all together (Gout: Prognosis, 2006).

When the homeostasis in the human body gets off balance, a lot of things can go wrong in physically in the body. Gout is only one disease that can be caused by a homeostatic imbalance in the body; some other examples are diabetes, dehydration, hypoglycemia and hyperglycemia. Due to the overproduction of uric acid in the bloodstream a lot of people suffer from the symptoms of gout, including redness, inflammation and swelling. The best way to prevent a disease caused by a homeostatic imbalance is to know your body by getting regular check-ups by your doctor. 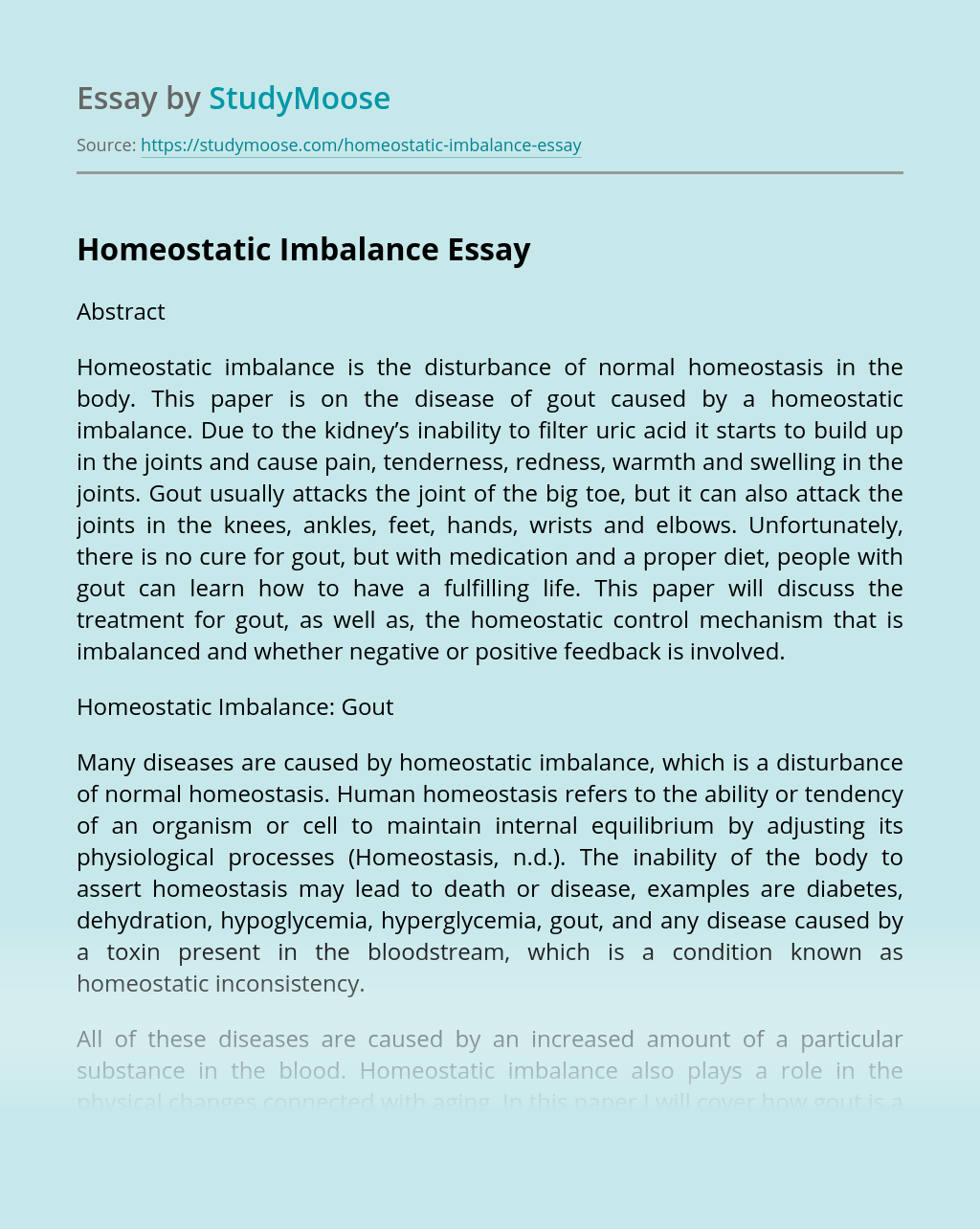