We see them all the time. Homeless people sit at street corners, holding signs, and asking for money or food. We may look at them, choose to ignore, or choose to give, but for many of the homeless, this has become their way of life. The reason I chose this topic was because of my recent volunteer work with the Salvation Army and Thrift Store in Grand Forks. I have seen people in desperate situations and heard some stories while working with community service members during my time at the Salvation Army.

I also personally worked with a homeless man every day at the Salvation Army. He was in his 50’s, tall, gray hair and a large build. He always wore layers of clothes which appeared dirty and worn. He never mentioned to me that he was homeless, but it was told to me by one of the other workers. I was also told that he often slept in the truck that was loaded daily with clothes to be sent over to Minneapolis.

He always had such a positive attitude about his job, working for the Salvation Army. People in his situation are another reason I wanted to do research on the history and current epidemic of homeless in America. Locally there is not nearly enough shelter for the homeless. The cost of rent, even in this town, has increased dramatically. In order to afford an apartment, you must save more than a thousand dollars much of time. It is not an easy cycle to get out off, as many people think.

As we have learned in class, women and children stay in different locations than the men, which means that families cannot stay together. Often, this fact leads families to sleep in their vehicles in order to stay together. There are many different reasons and causes for homelessness in America. Drug use is one of the earliest factors in homelessness. After the Civil War, morphine and heroin could be purchased from Sears and Roebucks catalogs. Hundreds of thousands of war veterans became addicted, and the addiction spread throughout America. The drugs were finally criminalized, but the damage had been done.

The three common terms, “hobo”, “tramp”, and “bum” came out of this era. Racial divides also still occur in the areas of healthcare, education, access to mortgages, and access to equal paying jobs among many others. Unless some type of intervention occurs, generational issues are often the rule and not the exception. Living in poverty creates depression, which can lead to drug use, alcoholism, and neglect of self and others. Poverty was a well-known issue during the Civil War and many children ended up homeless and in orphanages simply because their parents, or remaining parent, could not afford to take care of them. War often leads to loss of life, and therefore loss of income in families, especially during this time. Our country was still newly formed and there were no social welfare programs as of yet. Further along in history, during the Great Depression, jobs were lost, and the rates of homeless again, increased throughout America. Natural Disasters are another factor in the homelessness problem. The Great Chicago Fire, The San Francisco earthquake, the massive flooding of the Mississippi in the 1920s from Ohio through New Orleans displaced over 1.3 million people. The Drought of the 30s in Oklahoma and Texas, Hurricane Katrina, are just a few examples of disasters that affected millions of people’s households. The snowball effect of unemployment and poverty attribute to homelessness. People living in generational poverty, for example, may not have the knowledge or resources to become educated and move out of poverty. People living in generational poverty do not have the resources and support to become educated and move out of poverty. In 2011, the official rate of poverty in America was 15.0%, which is 46.2 million.

Another category of homeless is the very people who fought for our country: Veterans. One in three homeless people are veterans. The vast majority is single men (97%). In fact, 40% of the male homeless population is war veterans. A large percentage of these veterans (76%) experience alcohol, drug or mental health problems.3 Poverty was a well-known issue at this time and many children ended up homeless and in orphanages simply because their parents could not afford to take care of them. During the Great Depression, jobs were lost, and the rates of homeless again, increased throughout America. Natural Disasters are another factor in the homelessness problem. The Great Chicago Fire, The San Francisco earthquake, the massive flooding of the Mississippi in the 1920s from Ohio through New Orleans displaced over 1.3 million people. The Drought of the 30s in Oklahoma and Texas, Hurricane Katrina, are just a few examples of disasters that affected millions of people’s households. The snowball effect of unemployment and poverty attribute to homelessness. People living in generational poverty, for example, may not have the knowledge or resources to become educated and move out of poverty. People living in generational poverty do not have the resources and support to become educated and move out of poverty. In 2011, the official rate of poverty in America was 15.0%, which is 46.2 million. Many of the homelessness are those we do not see on street corners, asking for help. Locally, the North Dakota Coalition for Homeless People reports information regarding the homeless in North Dakota. A statewide January 25, 2012 Point-in-Time Survey of 972 Homeless People indicated: 6% stayed outside, in cars, in abandoned buildings the night of the survey 66% stayed in emergency shelters or transitional supportive housing 16% were precariously housed in motels or doubled up with family or friends and at imminent risk of being on the street 65% (635) were unaccompanied individuals

35% (337) were families, including 189 children under the age of 18 59% cannot afford rent, even if they have some income
48% were unemployed
36% had alcohol or drug abuse problems
35% had a mental illness
Who are the homeless in America? More than 42% of those accessing emergency shelter are families, and, on average these families remain in emergency shelters for 70 days, longer than either single women or single men. The primary reason for family homelessness is the lack of affordable housing, though poverty, unemployment, low-paying jobs, family disputes, substance abuse, and other factors all play significant roles in family homelessness. Recent statistics indicate that 26% of those suffering from homelessness are considered “severely mentally ill;” 19% are employed; 15% are victims of domestic violence; 13% are physically disabled; 13 are veterans; and 2% are HIV positive. Children are also not exempt from the issue of homelessness. We may not see them on the streets, but families with children are the largest growing segment of the homeless population. The education of these children is also affected by this lack of stability. Many times, because of the lack of a permanent residence, children miss or change schools, disrupting their education. According to the Institute for Children and Poverty, homeless children are nine times more likely to repeat a grade, four times more likely to drop out of school, and three times more likely to be placed in special education programs than their housed peers. Runaway youth are also at a high level of risk for homelessness. Homeless and runaway youth had been interviewed after getting into trouble with the law while out on the streets. It was found that some young people felt like they had to make mistakes before they realized they needed help. Rather than learning from seeing their friends get into trouble, they had to try out risky behavior themselves and see the consequences first hand.1 The desire to self-help is key to helping homeless of any age, especially the teenager who often feels like he/she is old enough to take care of his/her self. In this same study, there were three main things that were key to helping out these youth. The first was that the programs designed for runaway and homeless youth need to be flexible and person-centered. The second is that people are more valuable than programs and that process is more important than outcomes. The third is the importance of family and friends. Even after these kids leave or abandon their homes, these relationships often need healing.

Homelessness is a national problem and is not exclusive to cities. Rural areas make up 7 percent of the population. Catastrophic life events can trigger homelessness. There is a quote from a publication called “Starting Point Community Analysis” that states “We are all one life event away from homelessness.” For many of low income families, this is a true statement. Single moms in America have grown dramatically over the past 50 years. This has created an epidemic of poverty in our country. So many factors contribute to homelessness, many of which are unavoidable. Personal accounts of the homeless in America stated the intense loneliness of being homeless. Because of this loneliness, many single homeless people turn to drugs or alcohol for comfort and a way to escape their current situation. One homeless man stated that once an employer found out he had no phone, no vehicle, and no residence, his application was thrown away. Without assistance, many of these people give up hope on anything better for themselves. It is not as easy as “getting a job”, as many people are quick to say when seeing a homeless person begging on the street. It is an epidemic of the young, the old, the educated, and the uneducated. Many of these homeless stay out of sight. As social workers, we can provide information on assistance and programs that are available through the state and government. Many of these people simply need a hand up and do not know where to start. By working with these organizations, we can get started on helping via drug/alcohol programs, psychiatric care, financial resources, career and housing assistance. On a micro level, we may need to start with the basic needs of the homeless person. Shelter is the first need to be addressed, but the reasons behind being homeless also have to be addressed. There is usually a root of the problem when it comes to homelessness. Some examples may be a recent divorce, addiction, mental illness, or loss of employment. Even the smallest factor can change someone’s life and create a chain of events that they never planned for or saw coming. Also on the micro level we can work as counselors or referrals to health care professionals such as psychiatrists. For those homeless with mental illness, a facility and/or medication may be something that will help them to function in society. Also, introducing the homeless to any programs or help that is available in their local area would be an example of micro level social work. There are a vast array of concerns and reasons for homeless that need to be addressed. On a mezzo level, we may work with organizations such as http://www.endhomelessness.org, http://nationalhomeless.org , or more locally, www.ndhomelesscoalition.org to help raise money to help homeless people in need and further the current help of these organizations. On a macro level, we could work to campaign to raise government funding and policy changes for the homeless in America. An example would be shelter for families to go to together. This is not available locally right now.

Homelessness is a country-wide issue. It does not discriminate. From the wealthiest, to those who have lost everything due to the failing economy, to the poorest who grew up having nothing, homelessness is an epidemic that spans the history of our nation. 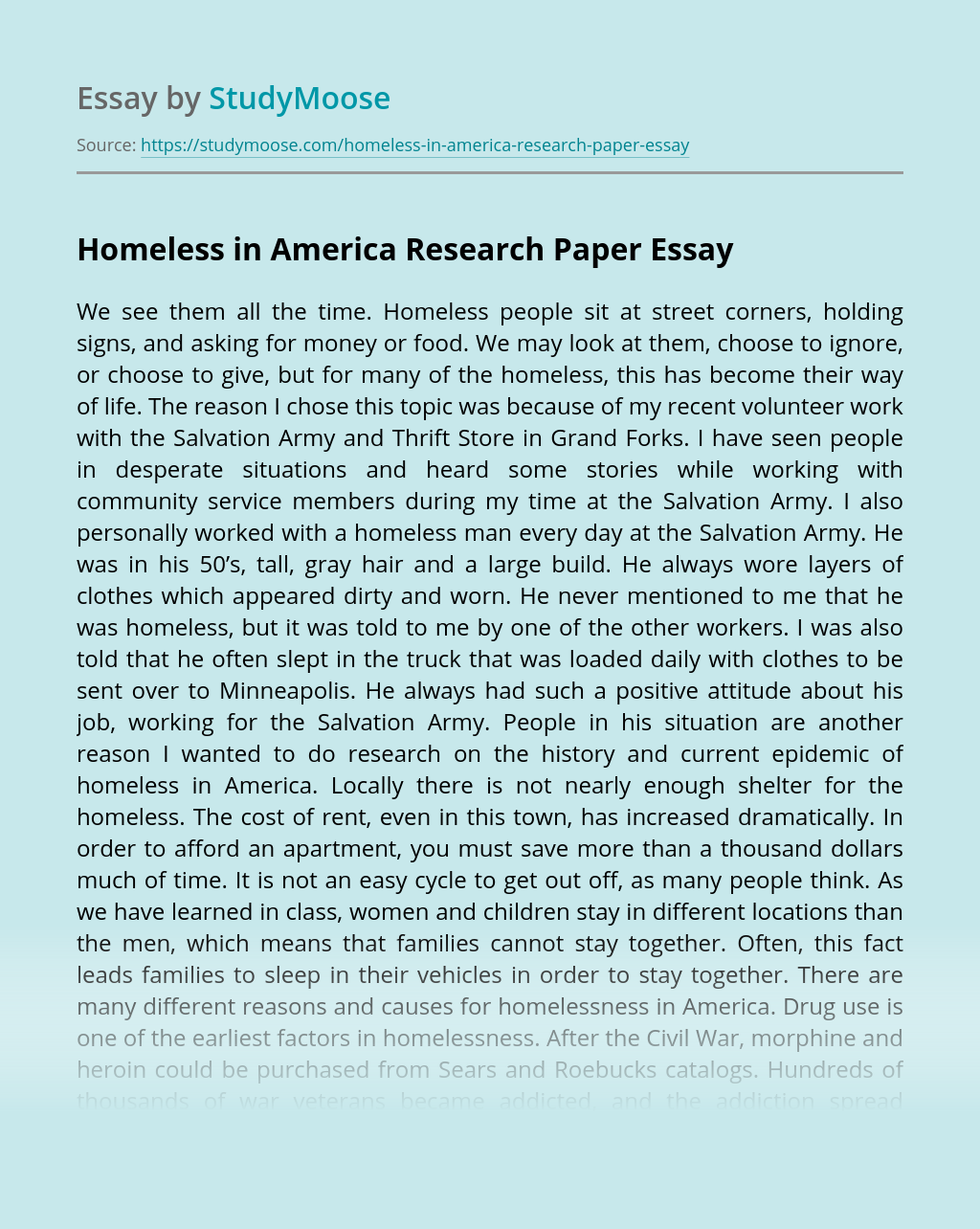