The capability of the Holocaust Museum to create variety of experiences among individuals has been manifested upon my visit in the museum. The capability of the museum to be an instrument for learning and at the same time an avenue for recounting history’s sad past remains to be evident in each person’s eyes as they try to recall what transpire in those incidents. Thus, visiting the Holocaust Museum can create a lasting effect among individuals.

Don't use plagiarized sources. Get your custom essay on
“ Holocaust Museum Experience ”
Get custom paper
NEW! smart matching with writer

) “The United States Holocaust Memorial Museum is America’s national institution for the documentation, study, and interpretation of Holocaust history, and serves as this country’s memorial to the millions of people murdered during the Holocaust. ” With this, the museum was used as an instrument and commemoration of gruesome past that continues to serve as a lesson and experience to people and potential visitors everyday. With this in mind, the Holocaust Museum advocates certain specific goals for its patrons and visitors.

According to (United States Holocaust Museum, p. ) “The Museum’s primary mission is to advance and disseminate knowledge about this unprecedented tragedy, to preserve the memory of those who suffered, and to encourage visitors to reflect upon the moral and spiritual questions raised by the events of the Holocaust as well as their own responsibilities as citizens of a democracy. ” Having seen the objectives and goals of the Museum, it may be better to indicate the contents that can be found in the Museum before formally starting the personal response to the exhibits that were present during that time.

The Holocaust Museum contains different artifacts, photos and other paraphernalia’s associated with the Holocaust incident. According to (United States Holocaust Museum, p. 7) “Divided into three sections presented chronologically, it begins with life before the Holocaust in the early 1930s, continues through the Nazi rise to power and subsequent tyranny and genocide, and concludes with liberation and the immediate aftermath of the Holocaust. ” I feel excited as I packed my things to get ready for the museum visit. I anticipated that I would learn a lot from the experience.

Upon entering the museum, I came to admire the wonderful architecture of how it was built. But what really fascinated me are the contents from the inside of the museum. I felt happy that it showcased different form of communicative tools that will enhance the museum experience of every individual. I was in awe of the exhibits neatness and concern towards the issue of Holocaust. What was also striking was the capability of the Holocaust museum to create an almost equal museum experience among individuals who have physical impairment.

According to (United States Holocaust Museum, p. 9) “The Guided Highlights Tour (GHT) is a tour option for people who are deaf, hard of hearing, blind, or have low vision. ” The exhibit that I first entered is the Holocaust room. It is a permanent exhibition room that tries to showcase visitors about the incident during that period. According to (United States Holocaust Museum, p. 11) “The Holocaust was the state-sponsored, systematic persecution and annihilation of European Jewry by Nazi Germany and its collaborators between 1933 and 1945. I came across pictures, illustrations and videos that showcased the brutality of Germany against Jews and other people who share the same facets of being weak and fragile in the eyes of Germans. Upon seeing this exhibit, what came into my mind is the movie Schindler’s List. The movie clearly showcases the plight of Jews who are in concentration camps and are experiencing the might and anger of German soldiers. In a way my hairs rose as I recounted several scenes and supplemented by the photographs in the Museum.

I came to ask myself, what could have happened for people to commit such heinous crimes? Is there any justice present among the conspirators and instigators of such monstrous act? In these questions, I came to realize that man in its very nature have the capability to do such a thing. I feel bad about it because Hitler was an amazing man. A born leader by heart, but his passion and brilliance went into the drain because of these inhumane acts. With regards to this, I remembered the quotation in the movie Spiderman where Uncle Ben was lecturing Peter Parker.

He said that “with great power comes great responsibility” With this notion, I came to realize that excess of power can eat a person up. It can shatter his/her ideals and consume his/her integrity. All that is left is an individual consumed and hungry for more power. In the end, it will all lead to his/her destruction and along with it his/her legacy in time. The gruesome acts by the Nazi’s have forever tainted history books and shall be remembered for its practices and extreme Fascist ideals.

I feel bad that such ideology came to the point of exterminating people of non-Arian blood particularly Jews because of such megalomaniac belief. The diversity of cultures has paved the way for such ideas of domination and superiority prevalent in several races. I felt sad that because of one man’s obsession ended up in a huge loss of lives all for the quest for Utopia and purity. This shame shall be brought about as time continues to pass. The next exhibit that I went to is the “Remember the Children: Daniel’s Story” According to (United States Holocaust Museum, p. ) the exhibit “tells the history of the Holocaust from the perspective of a young boy growing up in Nazi Germany” It felt funny at first trying to analyze and getting an experience of a child in trying to explain the whole Holocaust issue especially since the level of understanding of Daniel is quite different compared to young adults and adults. However, after careful browsing through the exhibits and the relevant tools present in the exhibit, I came to realize that indeed it is the child who can see what is really happening.

More often than not we are preoccupied with complicated explanations and ideas coming from different issues. What each of us fails to consider is the overall essence of the whole thing. In my own opinion, the exhibit of Daniel clearly showcases the simplicity and uniqueness of the issue since it revolves around the understanding of the child. Often, we tend to disregard the simple things and often focusing more on the complicating issues. As individuals, we must go down to the simple facts. This is what Daniel’s exhibit has to offer the simplicity surrounding the complex.

Another lesson that I had learned upon engaging in this exhibit is the relative importance of shaping and nurturing children of the proper ideals and values. It is the responsibility of each parent to teach their children the prevalent negative implications of society must not be adhered. However, in the exhibit, I felt that the child can be an instrument in both the positive and negative aspect. In the positive aspect, the child can be a catalyst for changes. Upon seeing the gruesome acts against mankind by the Holocaust, the German youth will condemn such actions and strive for the betterment of society against racial prejudice.

On the other hand, the idea can also be negative in result. The constant and continued exposure to such acts can now be adopted and considered as a norm by the child. In the end, it will only be emanated in the practice. Thus, the practice continues and such discrimination occurs. I feel that the Museum saw this incident and catered an exhibit just for children so that they may appreciate what such actions can contribute not only to society but also to mankind. It is through this that the process of realization and thinking occurs.

Without the proper motivation and mechanisms in place, the act of discrimination might still be prevalent in society right now. Instilling the proper values to children would be beneficial in the success of the Museum’s endeavor – educate and create awareness. Another exhibit that caught my interest is the Children’s tile wall. According to (United States Holocaust Museum, p. 13) “The 1. 5 million children murdered in the Holocaust are memorialized at the Wall of Remembrance (Children’s Tile Wall) in the Gonda Education Center on the Lower Level.

I felt touched about the contribution of the American children in the creation of this commemoration wall. According to (United States Holocaust Museum, p. 13) “American schoolchildren painted the more than 3,000 tiles that make up the wall. ” Seeing this, I again see the capability of children to create changes in the system that has been tainted with dishonesty and fraudulent behavior. What captivated me to view the wall is children’s innocence on issues. Their contribution creates a deep lasting remark on people as well as to society and groups.

It can be argued that one may create a commotion or argument if issues are raised by adults. However, if children were to point out the necessary and important matters concerning a specific issue, it will totally change the picture. It can be said that children only see the truth and their innocence can greatly help in fostering important changes needed. Another important exhibit that I took time to look to is the Hall of Remembrances. According to (United States Holocaust Museum, p. 13) “The hexagonal Hall of Remembrance with its eternal flame is the nation’s memorial to the victims of the Holocaust. In this floor, I came to see how people who were victims during the Nazi regime are commemorated and honored for their bravery and courage. I feel sympathetic when I saw this hall for people who lived during this time remained to be apathetic concerning this issue. The genocide of 6 million Jews was indeed a manifestation of such apathy. It would be better if some nation, groups or individuals took a firm stand against this inhumane act and clamored for changes. If intervention would have taken place, this I think should be the right time for such.

It might be a concern regarding control over territory; however the lives of people here are in question. Would intervention be beneficial during this time? I feel that such can happen and if only countries and groups came to realize this at an early stage then such killing would not have amassed to such number. As I went out of the museum and ending my visit, I came to understand and learn different things that were important in life. I came to understand that life is too short for doing unnecessary things.

One must make a difference and create the necessary means and objectives in doing so. Also, I feel a deep respect for people. One must not be prejudicial and racist in approaching other people. We are a cultural diverse people. We may have different practices that are uncommon to ours. But in the end, this diversity should not be manifested in a negative manner. On the other hand, this diversity must create a collaborative effort in understanding and creating mechanisms and practices that will lead to progress and growth of individuals. 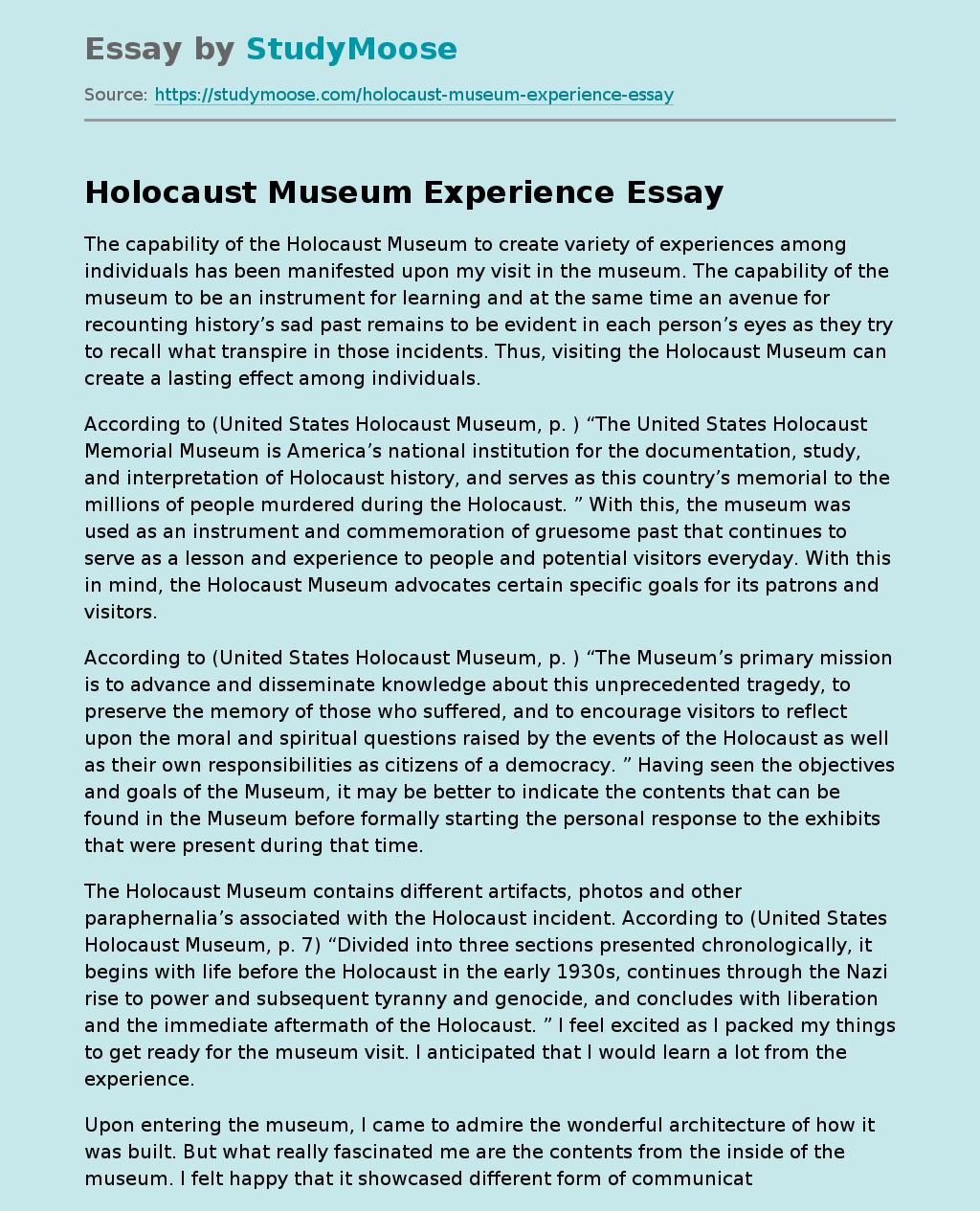