Hollow of the Three Hills by Nathaniel Hawthorne

Themes of the Hollow of the three Hills:

Main character as a beautiful woman with a shameful and abominable past. -trying to run from it will only make the problem follow.

Character as someone who is a plighted subject who had such a secret that she had to be where “no mortal could observe them. -She wanted this witch to help her see and hear what was happening with her loved ones; but she only had one hour to do so and after this one hour she would die Hawthorne did not come out and said this but in saying things like “there is but a short hour that we may tarry here.

Don't use plagiarized sources. Get your custom essay on
“ Hollow of the Three Hills by Nathaniel Hawthorne ”
Get custom paper
NEW! smart matching with writer

and I will do your bidding though I did.

She had run from everything that was important to her because the most important, was dying. Hawthorne was not too clear in stating what exactly the problem was but it seemed that her daughter had fallen ill. – Throughout the story Hawthorne masks this fact well and uses foreshadowing nicely.

She tried to run away from her daughter’s sickness and encroaching death, but by doing so only brought guilt and remorse upon herself.

She must have known that her husband would have strong feelings of antipathy towards her and still willingly looked in on his life to see how he was. – The part in the story when she looked back towards her husband was the part of the story that stuck out the most as Nathaniel Hawthorne’s style of writing. This was a good example of his ‘Puritan Guilt Ethic’.

She felt such remorse for leaving that the only good thing to do was to check up on him and see if he was all right. Nathaniel Hawthorne uses the ‘Puritan Guilt Ethic’ in most of his short stories and novels and this is one example of him using it. – The daughter died of her illness as Hawthorne foreshadowed throughout the short story by writing such things as “into the tone of a death bell and “like lamplight on the wall of a sepulchre.

She gave up her life to witness the pain and suffering she had cause to others. With her daughter dead by disease, her husband infuriated with hatred and pain, and her parents filled with disgust and humiliation she had no one that cared about her at all because she couldn’t handle the emotional stress. How much emotional stress does it seem she caused to others in the end though? She tried to escape her duties as a wife and mother but they just followed her to the very end

Hollow of the Three Hills by Nathaniel Hawthorne. (2016, Apr 14). Retrieved from https://studymoose.com/hollow-of-the-three-hills-essay 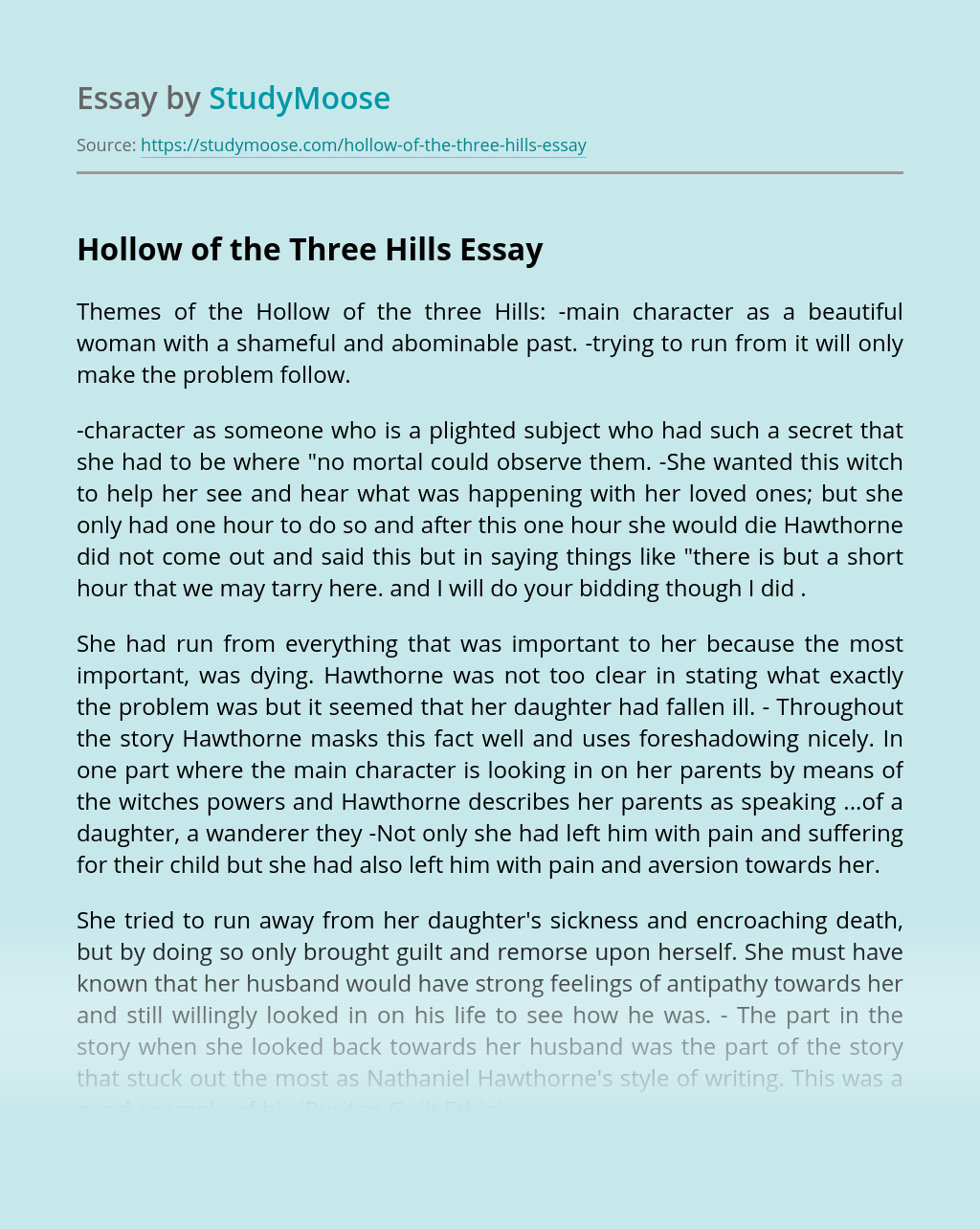