A comparison of the similarities in suffering, adjustment, and remembrance between the song “Hurt,” by Nine Inch Nails and the novel “The Catcher in the Rye” by J.D. Salinger.

Holden Caufield is a person with many mixed feelings. His happiness was left, but not forgotten in the past, and he suffers terribly because he cannot adjust to these changes to his world and also to himself. In the strong sense, looking back at the lost sense of reality that he still hangs on to, relieves him of all the troubles he has at the present time.

Don't use plagiarized sources. Get your custom essay on
“ Holden Caufield’s Relationship With ‘Hurt,’ by Nine Inch Nails ”
Get custom paper
NEW! smart matching with writer

He always compares things that happened in the past to events that happen in the present. The song, “Hurt,” by Nine Inch Nails (NIN), written by Trent Reznor, represents many of the feelings Holden experiences in his time of change. The similarities in suffering, adjustment, and remembrance between the song “Hurt,” by Nine Inch Nails and the novel The Catcher in the Rye, by J.

D. Salinger show that Holden Caufield is not the only person that experiences these feelings.

Throughout the novel Holden undergoes countless suffering from his peers, strangers, and his own mind. Throughout the song, Reznor suffers from everything. As said in the song, “I hurt myself today, to see if I still feel,” Reznor is accounting all the suffering that he has experienced. He tries to explain that all the terrible things that have happened to him, all the terrible things he has seen, with a nonstop chronic beat, has made his soul numb.

He has lost track of reality and fallen into this deep hole. Mr. Antolini, Holden’s old teacher, said to him that he was headed for a great fall. Little did he know that throughout the novel, Holden has been falling until he reached a stopping point towards the end of the story, when he decides to stay home.

This is exactly what Reznor is trying to dictate in his song. All these events have made him continuously suffer that at one point, the pain just goes away. The suffering that Holden feels, the drunk, sick, child in danger of catching pneumonia easily relates to the dying, beaten young man that Reznor feels he has become. For both Holden and Reznor, adjustment to the changes in the world is a difficult task not only physically but emotionally. Holden hates himself because he fears that he is changing: he has grayed out hair, he tries going into clubs, he smokes, he is too drinks too much. Reznor hates himself because he knows that he has become another person with a different personality that no one wants to be near anymore: his body is numb, he regrets the present by referring to the past, his realization he has become someone completely different, and he ignores the facts that attack him in the present. When he states: “Beneath the stain of time, The feeling disappears.

Read about Holden and Phoebe relationship

You are someone else, I am still right here, What have I become, My sweetest friend, Everyone I know, Goes away in the end,” Reznor is explaining that when he remembers the past, his troubles disappear and he looks forward to seeing the future. The fact of the matter is that he realizes that his friends have changed, yet he has changed himself, therefore for each reason these friends would increase their differences, the more the possibility that they would become more of strangers to each other. Holden experiences this several times throughout the novel. When he talks about Jane, the way she used to be perfect, placing her kings in the back because it would look nice, and now he has come to believe that she ‘gave time to Stradlater in Ed Banky’s car.’ He tries to see Sally Hayes and when he finally meets her, he realizes that she has become more of a phony than ever. He speaks to Carl Luce, an old roomate he used to have in which they were good friends, but he notices that he has become more self-centered and too materialistic.

He converses with Mr. Antolini, though he begins to suspect that he was making passes at him. Both Holden and Reznor are people that do not adjust to changes as well as other people, and this makes them different because they are the only two people that realizes that their pureness and innocence has fled their souls. The most important part of their lives was in their past. Holden’s brother, Allie, was the smartest kid he knew, Phoebe is probably the nicest sister he remembers knowing, and Jane used to be the perfect girl. He remembers many past events in the novel and tries to relate them to the present.

Holden also uses symbols in remembrance to certain events in the past. Allie’s baseball mitt, with poems written on them remind him of the greatness he knew his brother as. Allie died at a perfect age, and he had not yet done anything wrong, because children always speak their mind. As Holden remembers the past, he is relieved because his thoughts of the past are full of innocence. However, not all of them were happy thoughts. As Reznor dictates, “Full of broken thoughts, I cannot repair,” he knows that he has made many mistakes, some small and some terribly big, and through his regrets he becomes a sufferer. Holden regrets that his brother died, because there is nothing he can do to undo the past. He regrets flunking out of school. He also regrets that his mom got him skates that he never used, in which he feels that he should have used them. Reznor regrets many events in his past also, by showing “That old familiar sting” takes him back and relieves him. However, both Holden and Reznor dream, “If I could start again, a million miles away, I would keep myself, I will find a way.” they would both try to make themselves better people if things had not gone the way they did. In all this remembrance, both of them seem to realize that this beautiful copper circle of life remained in the past, and now that copper has begun to rust away its purity.

Holden and Reznor are two people that are stuck between the truth about the past and the present. They both suffer because of the terrible changes the world has adapted to and they suffer from the changes they also undergo, that the world has lost its sense of happiness, and they both have to adjust to this new, bigger, lonely world. They both establish the fact that the past was their golden era, but they must face the truth that life goes on. Holden and Trent Reznor are two very special people because they are unique in that they see that their childhood was either lived up to or unfinished, since most of us do not take the time to think if we have made our life good or not. Both these people understand something we could never understand; the fact that happiness should be the most appreciated thing in life, and not physical achievement. Though they might not be transcendentalists, they view society as corrupt, misunderstood, and illogical. Since they are smart enough to see that fact, they realize that they completed their life of happiness in the past, and now they suffer because they have nowhere to go, when we are still blazing forward in this field of rye… 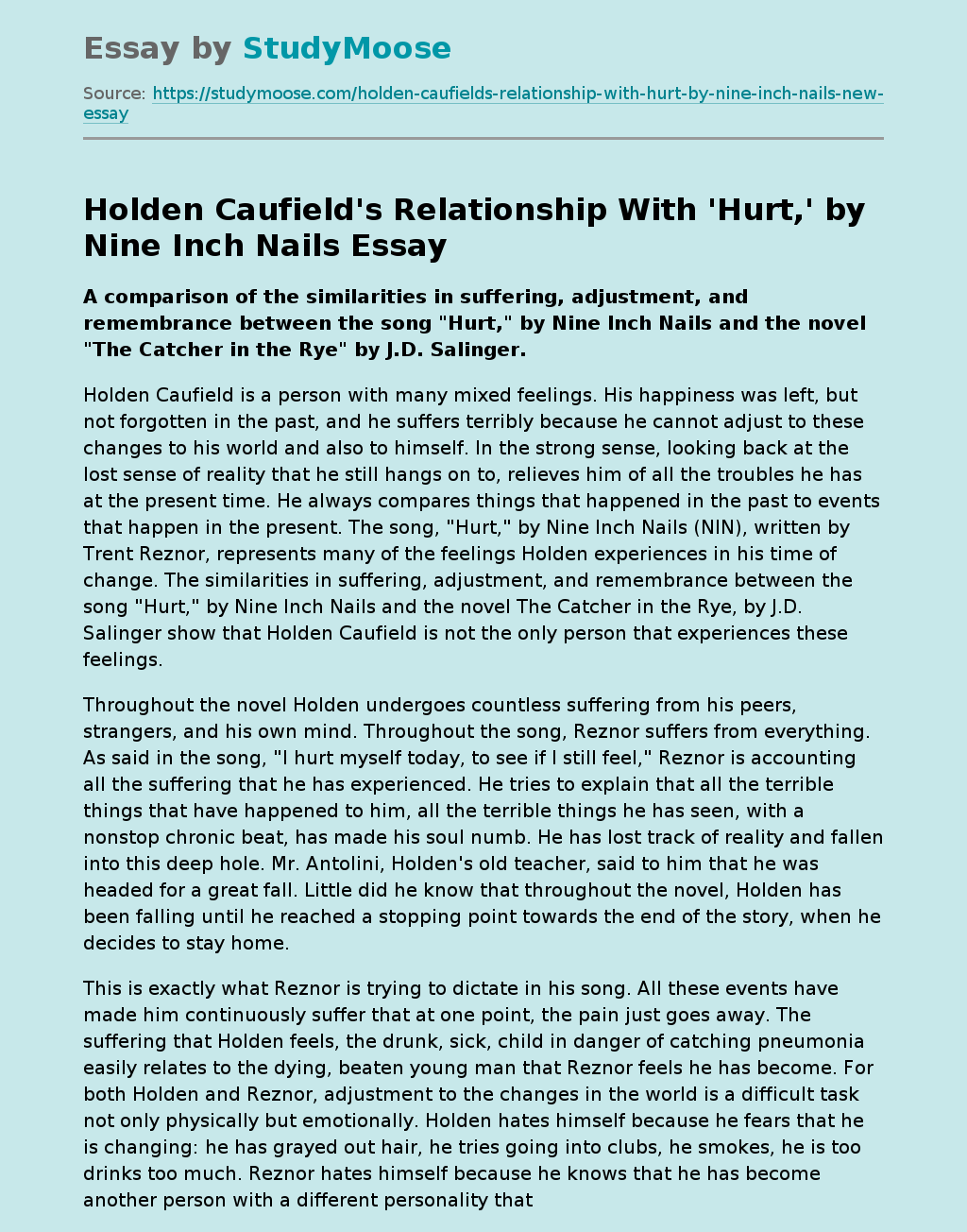