The curtains open to reveal the interior of Hobson’s Boot Shop in Salford. Hobson’s two younger daughters, Alice and Victoria, are at the counter. The door opens from the living quarters and Maggie, Hobson’s elder daughter, enters. The girls briefly comment on the fact that their father is late getting up. The reason for his lateness is soon made clear – a late night at a Freemason’s meeting, when, no doubt, the drink flowed freely. Albert Prosser enters (26, son of a solicitor and a lawyer himself).

Don't use plagiarized sources. Get your custom essay on
“ Hobson’s Choice Summary ”
Get custom paper
NEW! smart matching with writer

It is obvious he has come to see Alice and they have been seeing each other behind Hobson’s back.

Albert turns to leave as soon as he hears that Hobson is still at home. Maggie’s business sense surfaces and she ‘persuades’ Albert to buy a new pair of boots and leave his old ones for repair. Scene Two We meet Hobson and see the growing conflict between him and his daughters.

He is about to go out for his morning drink at the Moonraker’s Inn. His daughters tell him to be home in time for his dinner. He sits down and tells them he is tired of being bossed about. He refers to them as ‘the rebellious females of this house’.

He says he has noticed them getting ‘uppish’ towards him and he criticises the fashionable styles of dress his youngest daughters have been wearing. Hobson says he will choose husbands for Vicky and Alice because they’re not fit to choose their own and scoffs at the idea that Maggie may want to get married.

He calls her ‘a proper old maid’ and says she is past the marrying age. The girls have got the measure of their father and are not afraid to defy him. Hobson’s comment, ‘I hate bumptiousness like I hate a lawyer’ anticipates his embarrassment later in the play with the legal trap set up by Maggie.

Scene Three Mrs Hepworth arrives to praise Willie for the boots. Although Willie has trouble reading the visiting card, we are left in no doubt about his skill as a shoemaker. Mrs Hepworth is rich and can afford the best from the best shops in Manchester and yet Willie’s boots are the best she has ever had. Willie’s arrival on stage is delayed for dramatic effect as Tubby Wadlow is the first one sent for and questioned. The interest that Mrs Hepworth takes in Willie will be important later in the play when Maggie and Willie want to borrow money to start their own business. 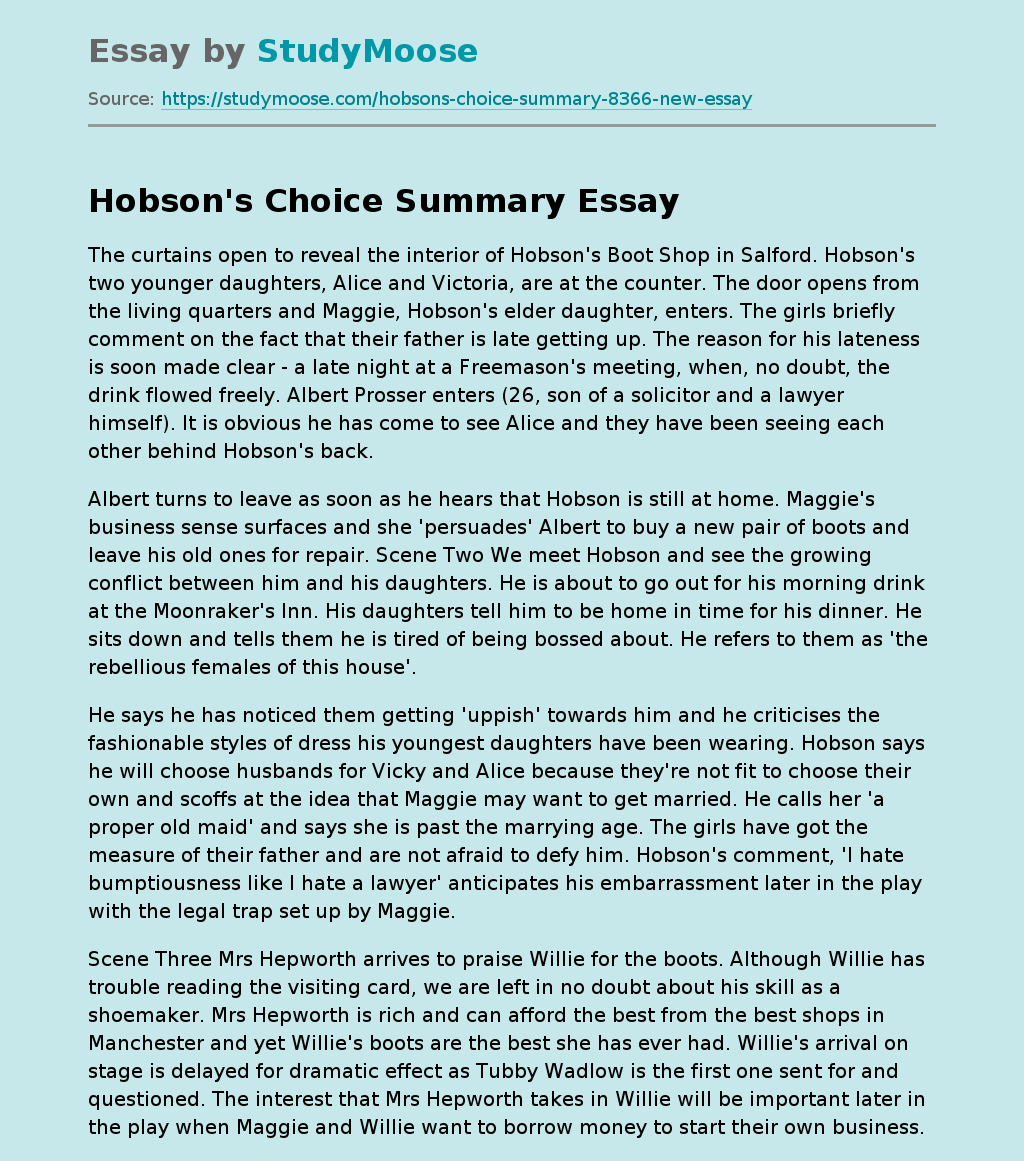