Trung nguyen is the most famous coffee brand in Vietnam. It was created in 1996 by Mr. D? ng Le Nguyen Vu. During student life in medical school of Tay Nguyen, Mr. D? ng had a question about coffee farmers’ life. Although the price of a cup of coffee wasn’t cheap, but why, farmers were still poor. This question encouraged him to find the answers. He and his company suffered from many accidents, but they kept on trying. Those experiences brought them a good background for opening more shops and expanding their business widely.

And in early 2004, they introduced G7 to the customers. This step turned Trung Nguyen history to the new page, they became the biggest and the most famous firm selling high-quality coffee powder. II. Strategy Trung Nguyen first opened their first coffee shop in Ho Chi Minh City in 1998 and received some positive feedbacks. In 2001 they had built over thousands coffee shops all over Vietnam and became top-rated brand in Vietnamese coffee industry.

They did Franchising, the step which was different from all other Vietnamese firm, they were the first. After 5 years, Trung Nguyen not only could gain the trust, the belief of Vietnamese customers but also customers in other countries like Singapore, Japan, Cambodia, etc. In 2006, Trung Nguyen invested and built the biggest high-quality G7mart system of stores for selling products. In June 2012, Trung Nguyen created the new strategy.

That was creating the string of quick shops, which allows customers to choose some various kinds of coffee beans and the owner of the shop will mix them together for making the customers’ own styles.

The evidence for the development of this strategy is the profit which grows 15% per week Trung Nguyen’s customers are not only the elder, the people who understand clearly about coffee but also, they have products for the young, who begin drinking coffee like student, teenager, etc. III. Revenue-Potential Growth.

Although the economics go down, Trung Nguyen still makes profit, and improves themselve powerfully. In 2011, their revenue and production improve up to 151%, and the first six months in 2012, they gain up to 178% compared with the same time in 2011. The biggest evolution of Trung Nguyen is their G7 powder became the leader of coffee powder in Vietnam at the rate 37. 8% In the near future, Mr. D? ng plans to join the world stock market and in the next 10 years, he tries to invest more than 800 million USD to build new factories and some additional options. 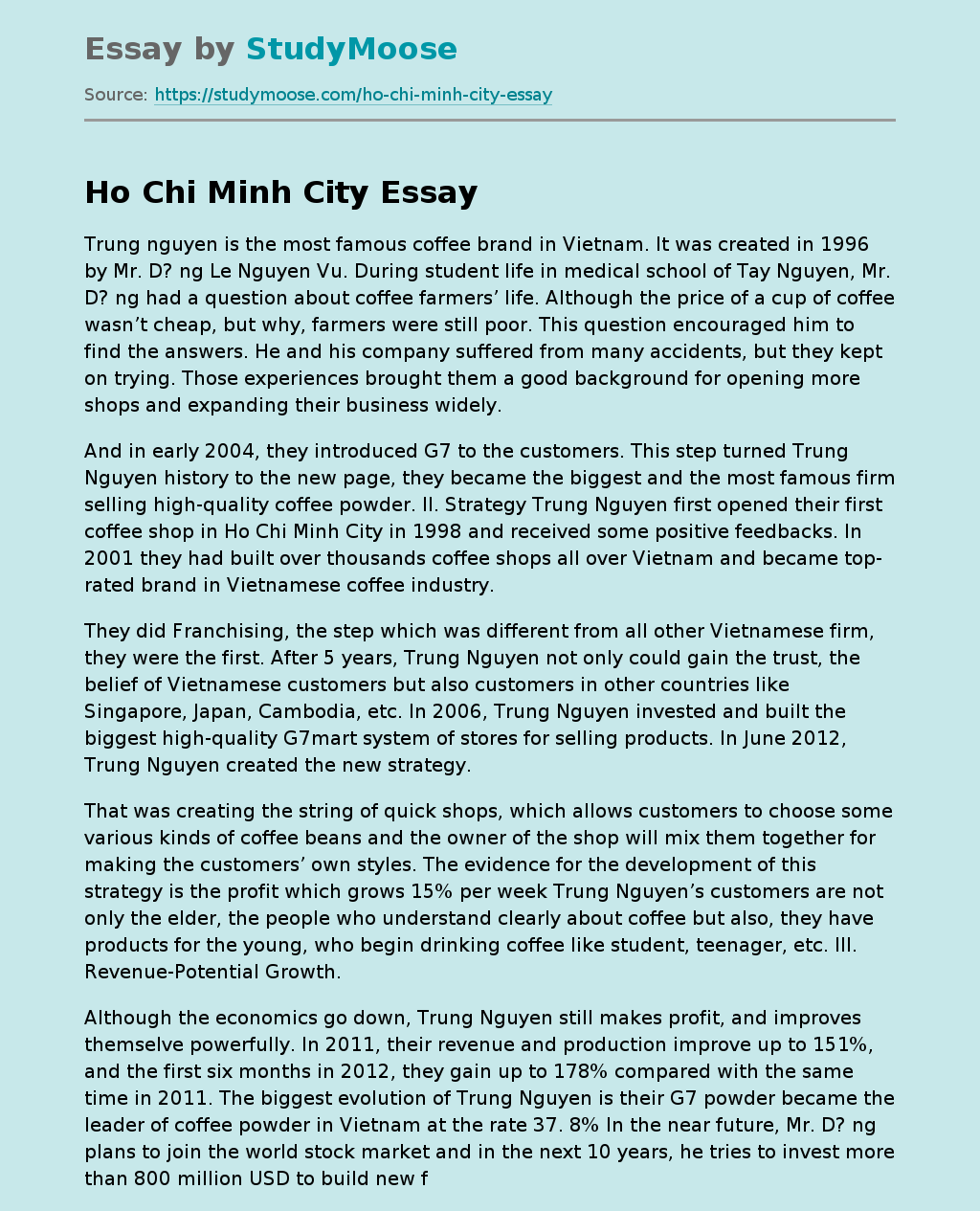