When one is ambitious in gaining power by the force of evil or by the used of violence, there is no stopping this one from what he or she is going to do. This is one of the moral ethical of humanity, something that every human being must suffer during their time of existence. It is also what William Shakespeare tried to show humanity that being ambitious will never bring any good to one person nor will it give happiness to one person.

Don't use plagiarized sources. Get your custom essay on
“ Hitler compared to macbeth ”
Get custom paper
NEW! smart matching with writer

During the time of Shakespeare, the time of the Renaissance, many dukes, lords, thanes, monarch, and commoners were ambitious in gaining power.

They all slew each other, even their own bloodline to gain power over the other. Shakespeare then wrote a play know as Macbeth, to show everyone of every class and society of how ambition can led one person from good to evil. Even in today world that there are still people that are ambitious in gaining power. Adolf Hitler, the tyrant of Germany, is very much similar to Shakespeare’s character, Macbeth.

If one ever compares the two tyrants, one would thinks that they are twin brothers or that Hitler based his character off of Shakespeare’s work. Both Hitler and Macbeth are similar in many ways, their ambition for gaining power, their liking for killing people, and their triumphant and hatred amongst the people.

One of the strongest similarities of both Hitler and Macbeth are their ambition of gaining power. Both of them never had any intention of being ambition at their young ages nor when they are serving for their country.

At first, Hitler was just an ordinary son of Alois Hitler and an orphan after the death of his mother. In his early years, Hitler had no intention of overruling the government or any…

Hitler compared to macbeth. (2016, May 24). Retrieved from https://studymoose.com/hitler-compared-to-macbeth-essay 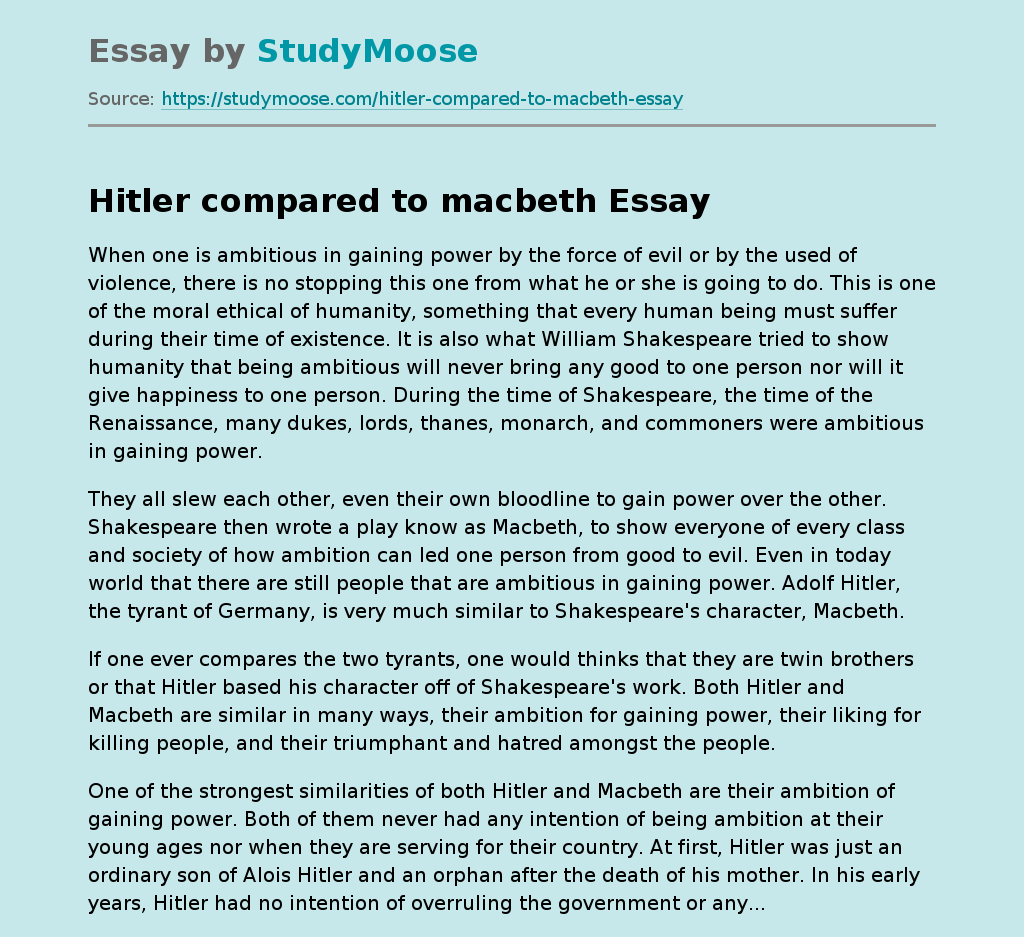