History of the Trumpet

Trumpets are one of the oldest instruments. In ancient times, people used animal horns or shells like a trumpet. It was first used for signaling in ancient China (2000 BC), Egypt (1500 BC), and Scandinavia (1000 BC). It was long and had no valves. In Roman times, the trumpet was played at military and civilian ceremonies.

The first musical use of the trumpet was in the late 1300’s where it had acquired the folded shape similar to today’s. In the 1500’s, Nuremberg, Germany became the center of trumpet making.

Don't use plagiarized sources.
Get Your Custom Essay on History of the Trumpet Just from $13,9/Page

During that time, the first music for trumpets was written. In the late 1700’s, the trumpet became a regular member of the orchestra.

Short pieces of tubing called ‘crooks’ were invented and used to lengthen or shorten the trumpet so it could play more notes. In the 17th to 18th century, trumpets were mostly in the key of D of C for courtly purposes and E flat or F in the military. The valve trumpet was invented in 1815, making crooks unnecessary.

Today, trumpets are usually played in orchestras, jazz bands, brass ensembles, popular music and bands. Different sized trumpets have different pitches and are used in different musical groups. Most trumpets in bands are in the key of B flat major. Historically, trumpets were used for many different things but music was not thought of until the late 1300’s.

Louis Armstrong , born in 1901 and died in 1971, was a trumpet player. He was one of the most famous and influential trumpet player in Jazz history. Many people thought he was the greatest jazz cornet and trumpet player in the world. He was born in New Orleans and he learned to play the trumpet while serving a sentence for delinquency in the Home for Coloured Waifs.

Dizzy Gillespie, born in 1917 and died in 1993, was also a trumpet player. He was an American trumpet player, composer, and band leader. Dizzy Gillespie’s real name is John Birks Gillespie. He was born in Cheraw, South Carolina. Dizzy co founded the bebop jazz movement with Charlie Parker and Thelonious Monk.

I have chosen a recording to listen to, from a CD called Trumpets in Modern Jazz. It is called ‘Kush’ and the performer is Dizzy Gillespie. I chose this recording because I knew Dizzy Gillespie was famous and I wanted to hear how he played the trumpet and to see if he really is as good as everyone says.

Trumpets may be loud and annoying sometimes but they have survived through the years so treat trumpets with respect and it might let out the best music in the world.

History of the Trumpet. (2016, Nov 27). Retrieved from https://studymoose.com/history-of-the-trumpet-essay 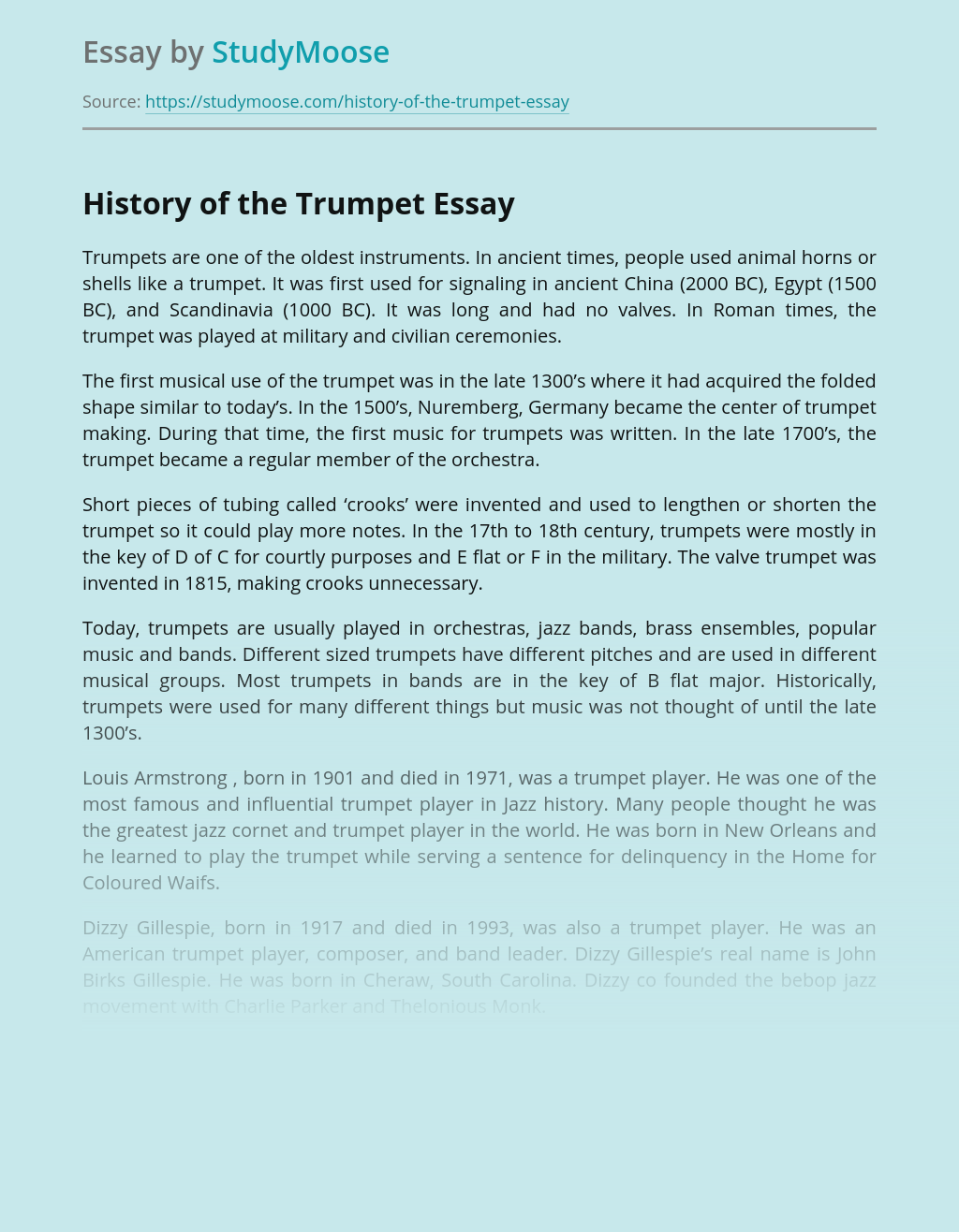 Analysis on Ralph Ellison’s “On Bird, Bird-Watching, and Jazz” Ellison’s purpose in this essay is to prove that “Parker was a most inventive melodist-a true songster” which is evident in paragraph one. He uses the fascination of nicknames to symbolize the achievements of “Bird” and the impact the nickname had on others. He adds in...

One of the greatest jazz bandleaders, arrangers, recording artist, and composers of all time is none other than Duke Ellington. Born on April 29, 1899 in Washington, D.C., Ellington was destined for musical talent. His family was musically talented; both of his parents could play piano even though neither could read music. Ellington did not...

Jazz is a musical style that began in African American communities in the southern United States around the beginning of the twentieth century. It was a new style of music that brought together music traditions from West Africa and Europe. Some of its West African musical influences give jazz its unique sound. Jazz has many...

The Great Gatsby – Writing Prompt 1 The 1920’s were a time of dramatic changes that affected the economy, society, politics and popular culture. The nation’s total wealth doubled between the years of 1920 and 1929. As modern cities began to develop new buildings and advanced technology, many Americans began to move into the city...

The late Dave Brubeck left behind a legacy as a jazz pianist, composer, bandleader, husband, and father. He wrote everything that ranged from opera and ballet, to a contemporary mass. Brubeck was well known for experimenting with time signatures unusual to the traditional jazz sound. The uneven meters, along with the incorporation of all kinds...