History of Marie Antoinette as a Leader

Marie Antoinette has acquired a rather bad legacy in world history. She was the Archduchess of Austria, the Queen of France, and the fifteenth child of Maria Theresa, Empress of Austria. She was also the wife of King Louis XVI, the unpopular king of France. She was also the lucrative symbol of taste, power, and notoriety. Indeed, one when servant said, “the people of Paris are rioting because they have no bread,’ Marie Antoinette replied ‘Then, they should eat cake. ’ Marie Antoinette’s Austrian origin had made her an easy target of the revolutionaries who accused the royal family of treason.

Many of the king’s decision and some of the ministers were heavily influenced by the queen. One such example was the king’s decision to remove Jacques Necker as minister of finance. The libelles accused the queen of having illegitimate sexual encounters with several lovers – a violation of state and church law. These accusations reflected the image of the Crown and in general the legitimacy of the ruling dynasty.

Indeed, throughout France, the queen’s name was synonymous with disgust and luxury. The queen however was a leader cloaked in notoriety. As Larry Wolff argued:

Precisely the qualities that were making Marie Antoinette into an emblem of decadence for the ancient regime had been realized on the brink of the French Revolution. The queen led by notoriety and abuse, whilst the king led by example and authority. Indeed, Marie Antoinette was not only the symbol of hatred and disgust, she was in essence the manifestation of such qualities (25).

As a woman, Marie Antoinette was initially a person of integrity. When Maria Antoine became the only potential bride in the family, Empress Maria Theresa was generally dismayed.

Marie Antoine had a cracked smile, due perhaps to the irregularity of her teeth. The empress commissioned a French doctor to perform some painful oral surgeries. After several months, France and Austria set a large dowry for Marie Antoinette. On the 7th of May 1770, Marie Antoinette was handed to the French monarchy. Madame Antoine showed great interest in the marriage, as it was the only way to forge a powerful alliance between the two great powers. Reaction to the marriage was initially mixed. The would-be-queen was popular among the French public.

Indeed, her first appearance in the French capital was considered a success. At court, Marie Antoinette was not very popular. The nobles called Marie Antoinette ‘the Austrian woman. ’ Prominent officials of the court accused the queen of attempting to bend the king to Austria’s interests. The queen was frivolous of French politics. Indeed, in a letter to Empress Maria Theresa, her mother, she said: Madame, my very dear mother, I am delighted that Lent has not damaged your health. Mine is still rather good. The same can be said of my husband and the public.

I am very grateful that the French people have accepted me as their queen. My joy is politics. Politics is what drives the kingdom into excitement and prejudice (32). Marie Antoinette’s relationship with the mistress of Louis VX was not very good. The mistress, Madame du Barry influenced the king to remove duc de Choiseul from power. Marie Antoinette spoke to Madame du Barry to resolve the crisis. After their conversation, the mistress was satisfied and the crisis over. The king, Louis XV, was pleased with Marie Antoinette. The influence of the Dauphine increased dramatically after the crisis.

Marie Antoinette’s anxiety forced her to spend more on fashion and gambling. She spent mindlessly on clothing, special trips, shoes, and perfumes. She also developed intimate friendships with the ladies of the court. The princess de Lamballe became the Superintendent of the Household; the duchesse de Polignac became the Governess of the royal children; the comtesse de Provence became the teacher of the royal children. On the 27th of April 1774, the king fell ill. Marie Antoinette pressured the king to send his mistress away from Versailles. On the 10th of May, the king died of smallpox.

The Dauphin was crowned King Louis XVI of France at Rheims. Marie Antoinette, unfortunately, was not crowned queen. Marie Antoinette became more and more desperate after the comtesse d’Artois gave birth to a son. The queen plunged into a spending spree – buying clothes from prominent dressmakers from Paris and gambling. The queen also attracted admirers from the king’s court. Louis XVI gave Marie Antoinette a duty. She was given responsibility to renovate the Petit Trianon. She ordered the construction of an elaborate garden with an arboretum of exotic species.

Madame de Pompadour became one of the queen’s closest friends. With the consent of the king, the queen instituted several changes in the court. The queen abolished segregated dining spaces in the court and abandoned heavy make-up and widehooped panniers. The queen also participated in plays and musicals. She was very fond of acting and singing. She also started to influence the appointment of officials in the state. The Marquis de Castries and the Comte de Segur became minister of the navy and minister of war respectively. Unknown to many, their appointments were approved by Jacques Necker, the finance minister.

On the 29th of November 1780, Empress Maria Theresa, the queen’s mother, died. Marie Antoinette was worried that the death of her mother would destroy the Franco-Austrian alliance. She sent a letter to Emperor Joseph to request an assurance that Austria had no intention of leaving the alliance. The success of Marie Antoinette’s correspondence saved the country from embarrassment. The king rewarded her with precious items for her services to the French nation. She soon gave birth to a male heir – the Dauphin. However, after the death of her mother, Marie Antoinette was semi-retired from politics.

The king shelved the queen from the affairs of the court. Indeed, the king rarely talked to the queen about official policy. As a mother, Marie Antoinette devoted so much time for the royal children. She would tirelessly look after her children and even the children of her courtiers. The queen also read famous historical novels as well as Rousseau’s political philosophy. The queen developed an appetite for leaning the English language. On the 27th of March 1785, the queen gave birth to a second son. There were, of course, suspicions of infidelity.

The image of a conspicuous, hard-headed, and spendthrift queen was becoming a public expression. A second daughter was born two years later. According to Wolff and Hubert, Marie Antoinette was a concocted image of power (92). She was the power behind the throne, not in its classic sense. Her actions were beyond the reprove of the king. Indeed, her actions proved detrimental to the king’s position. She also played one minister against another in an attempt to strengthen her own position. It is not a classic expression of power play, but a magnified reaffirmation of the queen’s uncertain position.

The queen, above all, was never deterred by the intensity of French politics. She was politically independent. An example of such instance was her management of the Trianon. According to Sheriff: From the moment she was in possession of the petit Trianon, it was spread about in some societies that she had changed the name of the pleasure pavilion that the king had just given her and had substituted that of little Vienna or little Schonbrunn. A man of court, simple enough to believe the rumor and desiring to enter into her society at the petit Trianon wrote to M.

Campan to ask permission of the queen. He had in his letter called Trianon little Vienna (61). During the French Revolution, the queen’s extraordinary qualities as a ‘born’ politician and power player began to emerge gradually. She sent letters to the German and Austrian monarchs to restore Louis XVI to the throne. She also sent correspondence to the British prime minister, enumerating the dangers of the Revolution. From time to time, she was actively involved in conspiracy. When she was about to be beheaded, she remarked with haste ‘Long Live the Bourbon dynasty.

History of Marie Antoinette as a Leader. (2016, Sep 19). Retrieved from http://studymoose.com/history-of-marie-antoinette-as-a-leader-essay 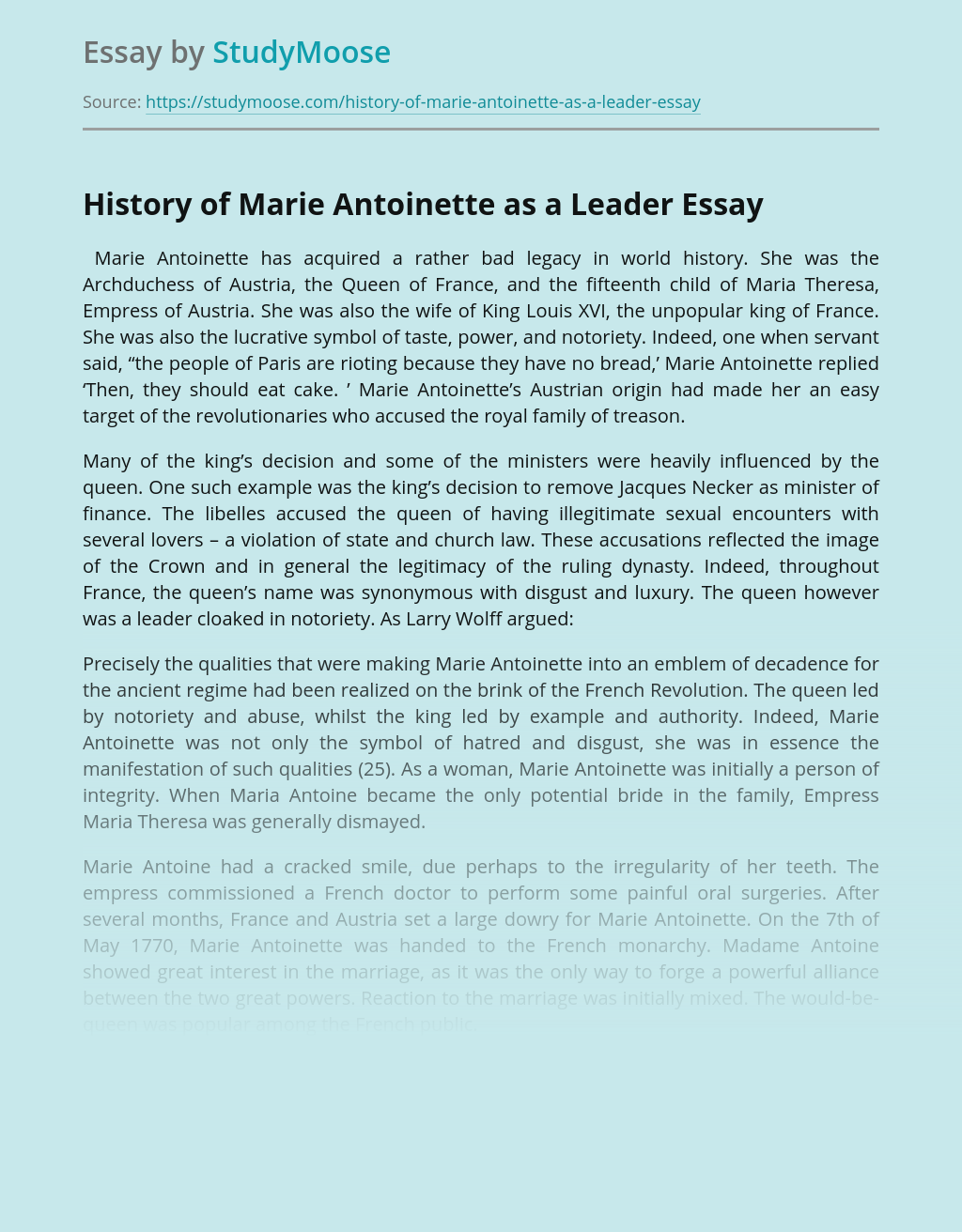 Don’t waste time
Get a verified writer to help you with History of Marie Antoinette as a Leader
Hire verified writer
$35.80 for a 2-page paper
Stay Safe, Stay Original