History of Idea of Free Lunch

‘There ain’t no such thing as a free lunch’ commonly referred to as TANSTAAFL is an idea that generated around 1930s, in the United States of America where the keepers of the saloons used to make an offer of a free lunch to the guests who just had to pay for a glass of beer. The barmen attracted many customers due to the offer and earned handsomely. But the actual logic behind the offer was that the lunch served was very salty, which made the guests buy more glasses of bear.

Don't use plagiarized sources. Get your custom essay on
“ History of Idea of Free Lunch ”
Get custom paper
NEW! smart matching with writer

This made up for the payment of lunch that they had and in this manner, the barmen cunningly used the word “free” to attract customers. This anecdote proves that there is nothing in the world that one can get free of cost. It simply means that one needs to lose something in order to gain another.

This economic theory should be taken as a universal truth because every individual experiences this harsh truth since childhood, as children hear their parents saying that” money does not grow on trees”.

The most basic reason for this idea to come up is again the fundamental reason of the existence of economics-“SCARCITY”. If the resources were not scarce, there would have been no reason to pay a price for what we consume. Everyone could go on consuming anything desired irrespective of availability, necessity and the consequences. But, the reality is that there is no something that comes for nothing. There is a price to pay for everything that one uses, be it a needle to a luxury car.

Let us understand this with the help of a real-life example. Often we have come across malls and supermarkets giving an offer of quantity deals such as “BUY 1 GET 1 FREE”. The truth is that such offers are business tactics to persuade the customers to buy the product by making them feel that they are getting something free of cost. Shopkeepers often put forward such offers in order to clear the remaining stock. It is up to the customer to decide whether they want to fall trap to such sales promotion tools or not. The theory can be proved by the following example:

A consumer purchased four packets of ‘McVities Bourbon Delight’ biscuits from a supermarket which gave an offer of ‘BUY 2 GET 2 FREE’. Upon inquiring, it was found that the consumer wanted to purchase only two packets of biscuits, but ended up buying four due to the ongoing offer with the product. Generally, they do not analyze what benefit or loss they are going to accrue with the purchase of a product that comes free of cost with another. The four packets in all cost her Rs.60. So ideally, each packet costs Rs. 15. A similar packet of ‘Britannia bourbon’ biscuits cost Rs.20. The consumer found it reasonable and made the transaction feeling that she had gained something from it.

The point that most people ignore is that they forget to take the weight or quantity into consideration. This is where the businessmen are smarter than the consumers and take away their margins. The ‘McVities Bourbon Delight’ biscuits weighed 100 grams, while ‘Britannia bourbon’ biscuits weighed 120 grams for Rs.20. Therefore, in each of the four packets the consumer bought, she lost 20 grams. The weight manipulation cost her one whole packet of biscuits, if the total quantity lost is added. This shows that even though the price of the biscuits was lower than that of the other packet, the customer had to compromise on the quantity of the product purchased. This again proves the above theory that nothing comes for free and there is some cost associated to everything that we get. Hence, customers should not be misled by such false offers and make the right choice by taking everything into consideration.

Furthermore, there are many examples to illustrate the above theory. One such example is a personal experience, when the student was surfing on the internet to download a soft copy of a reference book named’ Sydseater & Hammond’. After searching on many websites, it was found that it could not be obtained so easily, and the only way to get it was agree with the condition of a particular website known as ’SCRIBD’(Sydseater Hammond – Mathematics for Economic Analysis – Scribd,n.d.). The condition put forward by the website was to upload any presentation, research paper, legal document, or any other document to download what the student wanted. To meet that condition, the student had to upload a presentation made by her on L’Oreal India Pvt. Ltd., as a part of her personal research.

This shows that something has to be given in return for another, an important document for another. It proves that even websites are not willing to share vital information free of cost. They want something to add to their plethora of knowledge to let the users have access to their precious resources. Therefore, even on the internet, where the users feel that they can have access to information for free, there is no something that comes for nothing. Also, some of the applications such as Netflix, Amazon prime and Hotstar special demand their customers to pay a premium to watch special episodes which are inaccessible otherwise. However, this is true in a way to charge a fee for any service or good provided by the sellers as every person has a motive to earn and no objective of charity. Exchange is important, and is an indispensable part of everyone’s life. This saying is very appropriate that’ no pain no gain’ and it has universal applicability. Some sacrifice has to be made in order to achieve something more and this is what adds value to life. If everything were free of cost, nobody would take the pains to work hard or earn for a living and life would not have been what it is, as bread earned gives ultimate satisfaction and gifts received are not just valued for and taken for granted.

For instance, a Chartered Accountant always faces a dilemma of working under a firm, which is doing a job or having to create his own firm and carry on the audits. He could enjoy a moderate salary with low risks and having relieved of the tension of ultimate responsibility. On the other hand, he could earn a handsome amount each year if he takes up the risk of handling a firm himself. Either of the two choices can be made and preferring one over the other has its own advantages as well as disadvantages. Hence, losing an option over the other is known as the opportunity cost of selecting a choice. In the given case, having one’s own firm has an opportunity cost of losing out on a risk-free job and similarly, the opportunity cost of doing a job would be giving up on the handsome amount that an owner of a firm can earn.

Moreover, even doing nothing has an opportunity cost. If a skilled person capable of getting a job sits idle at home, he or she would also have a cost associated to it. This would be the salary and the perks that the person could have earned if he would have participated actively in contributing to the GDP of the country. Similarly, doing one’s work too, has an opportunity cost. The amount of time spent on the work could have been invested in performing recreational, spiritual or religious activities. Therefore, there is nothing in this world that comes free of cost. In order to attain something, some price has to be paid for sure and this is how the world works, be it any arena of life.

However, there is one exception to this idea, and that is the Sun. Heat and light is available for free and it is unlimited. There would be no day on this earth when the Sun will not rise or the organisms in the world will not be blessed by the mercy of the lord. Farmers can grow food for the world and everyone can enjoy warmth without having the fear of SCARCITY in mind. So it is time that we use the only unlimited resource to the greatest possible extent and contribute to sustainable development and save our earth from grievous pollution.

History of Idea of Free Lunch. (2021, Feb 03). Retrieved from https://studymoose.com/history-of-idea-of-free-lunch-essay 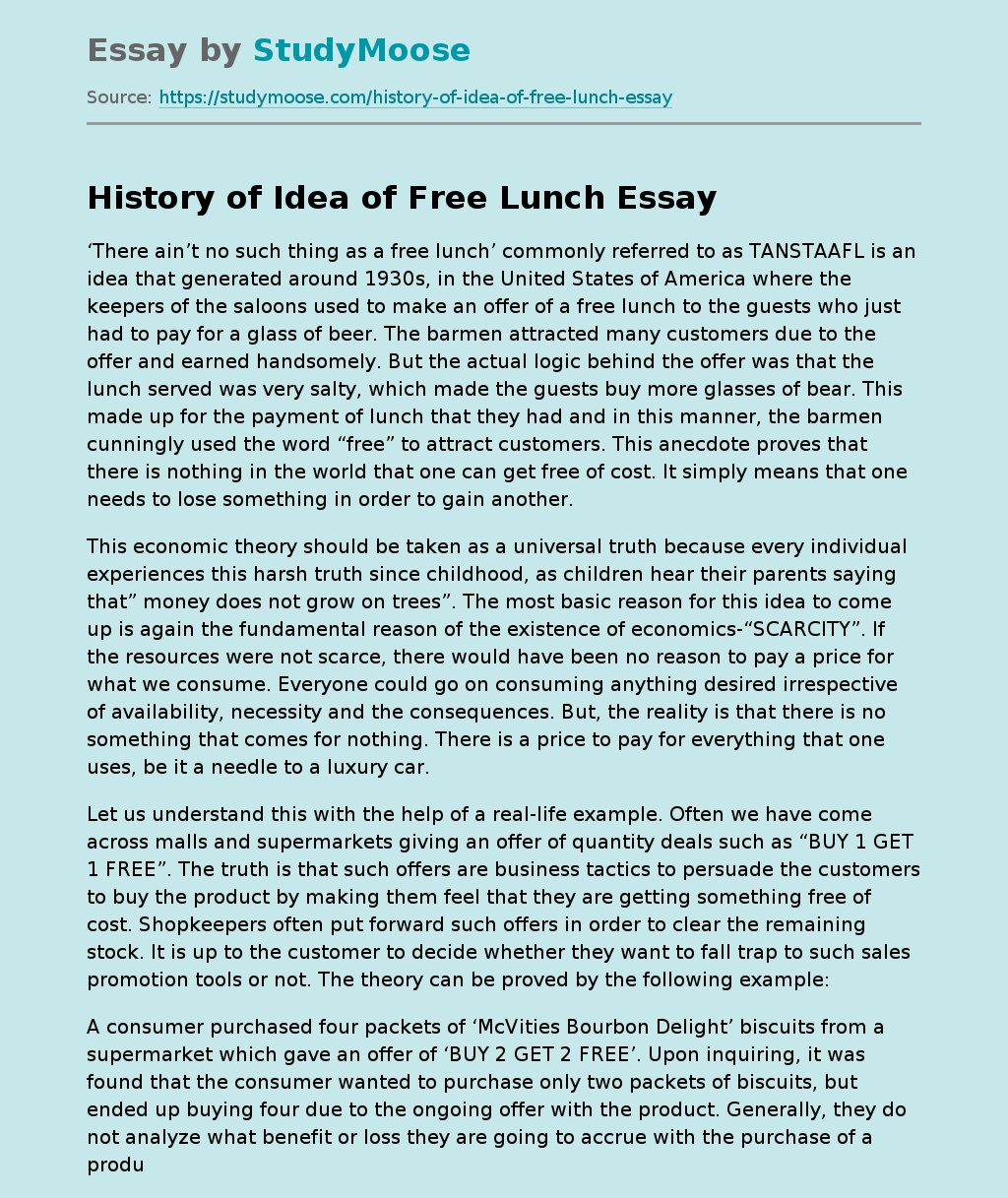