Human trafficking begun way back when human beings used to have slaves thus its trade, after the U.S was able to achieve its independence in 1776 slave trade was eventually abolished in 1808, even though the practice would still continue, subsequently there was the passing of the 13th Amendment of the U.S. Constitution in 1865 thus leading to its abolishment in other countries, after World War II, the UN also adopted the Universal Declaration of Human Rights in 1948 thus prohibiting human trafficking and stating that no one was supposed to be held in slavery or servitude.

Don't use plagiarized sources. Get your custom essay on
“ History of Human Trafficking, Forced Labor and Slavery ”
Get custom paper
NEW! smart matching with writer

It has been defined as the trafficking in Persons which involves three steps including recruiting, transporting, transfer, the harboring and even receipt of people as the first step (Thao, 2018). This trafficking can be through threating or even using of force or other forms of coercion such as abduction, fraud, deception, abuse of power or a position of vulnerability or even through the giving or receiving of payments and even offering some benefits in order to have the consent thus taking control over them and finally the intention of exploiting other people person through: prostitution of others, sexual exploitation, forced labor, slavery, servitude, and removal of organs.

In addition to this, the recruitment, transportation, transfer, harboring or receipt of a child for the purpose of exploitation shall be considered ’trafficking in persons’ even if this does not involve threat, use of force, or coercion. Every year, tens of thousands of people from all demography are caught up in the trafficking trade.

This issue affects all countries as trafficking can be in the country of origin, transiting and even destination for victims hence better policies ought to be formulated and even implemented to avert this menace. Human trafficking Significance Even though the United Nations through the universal declaration of the human rights outlawed the practice of human trafficking, it has continued to affect the international community affecting every country around the world. Human trafficking can be likened to modern slavery as most of the times the victims are taken captives and made to work or perform a certain duty unwilling fully.

In the year 2016, there were approximately 40 million victims of modern slavery in that there were 24.9 million who were forced into labor and also 15.4 million who were forced into early marriages. In addition to these, there has also been approximately and over the 85 million people who have been subjected to some form of slavery The human trafficking crime has been ranked by Interpol as the 3rd most committed international crime following drugs and arms trafficking illustrating how this crime has taken toll in the world. This is because it is a big profit industry and is estimated to be a $32 billion industry (Simmons, 2019). More recently, the International Labor Organization put the estimates of the illegal trade revenues at $150 B every year. As it is growing at a fast past throughout the world, it continues to be menace as the world grapples with it hence the need to tackle it. Even though there are protocols and other international treaties that have provided for its legislation, it has not been adequately addressed as there is still not enough laws for the anti-trafficking measures and also it is not well-funded thus cannot be effectively combatted hence the need for a more refined policy when dealing with it.

Public Awareness of the Human Trafficking

The lack of public awareness has proved to be a major problem facing effectively combating of the human trafficking, this is because most people are not conversant with it and hence are not able to report when faced with the challenge, even though there have increased reporting incidents of trafficking (Corrine Schwarz, 2019), there have been cases which have been left and not reported due to the lack of sensitization however there has been efforts made to improve this through various platforms.

Human trafficking has been highlighted through the media which has helped in the sensitization of the issue helping to shape the social discourse. The media through platforms such as movies, an example is Taken (2009), in the movie, the director illustrates the abduction of an American child who was traveling overseas and thus lost contacts with her family members. Through such forums is how public awareness is done in that leading to the public understanding it better. In addition to this with the embracing of technology, the topic has been addressed in other platforms such as social media, and even documentaries in platforms such as YouTube (Sweileh, 2017). While these platforms help in the sensitization thus bringing the issue to the public limelight thus stir our moral conscience, they are not a true reflection of what exactly the trafficking is as most of it focuses heavily on sex trafficking thus leaving other forms of trafficking. Even though there are shortcomings in the awareness, the media reports have helped change narrative on the human trafficking making it well-known as a crime and can happen to anyone.

In 2000, the UN Protocol to Prevent, suppress and Punish Trafficking in Persons, Especially Women and Children also known as the Palermo Protocol was finalized by Member States and supplemented the United Nations Convention against Transnational Organized Crime. Through this protocol, there was the definition and framework to address trafficking thus offering the first international definition of human trafficking (Kevins, 2019). Even though there is this legislation, globalization has enabled the increase the easy access for traffickers to victimize vulnerable populations; this happens through platforms such as the internet in that the traffickers have used it to their advantage and continued their perpetration.

Scope of the research

Human trafficking impacts people from all over the world, making this issue relevant to everyone as its victims include women, men and transgender individuals, adults and children and even foreign nationals or nationals. These people can also come from different backgrounds and thus can easily fall on the hands of the predator thus become preys thus one can contribute to the trafficking through using products that are proceeds of the crime. Systemic social, economic and cultural practices can be used to marginalize and even discriminate this people, this is because they can be considered poor and have little education or even be challenged physically , some due to their gender (Hofman, 2019).

Other persons may also be victims through the lacking of goo healthcare and even legal services thus wanting to search for greener pastures may lead to be victims. others come from societies who are in dire situation such as civil wars thus have a crisis in that the children who are left behind by their parents can also be targets as the traffickers often want to find easy targets so that they ensure that they do not have security thus the traffickers exploit this chances even though this issue can be considered as an issue of human rights, it is also seen as an issue of criminal justice in international law thus the research sets to offer the framework and even implementing of some policies (Cdebaca, 2018).

History of Human Trafficking, Forced Labor and Slavery. (2020, May 11). Retrieved from http://studymoose.com/history-of-human-trafficking-forced-labor-and-slavery-essay 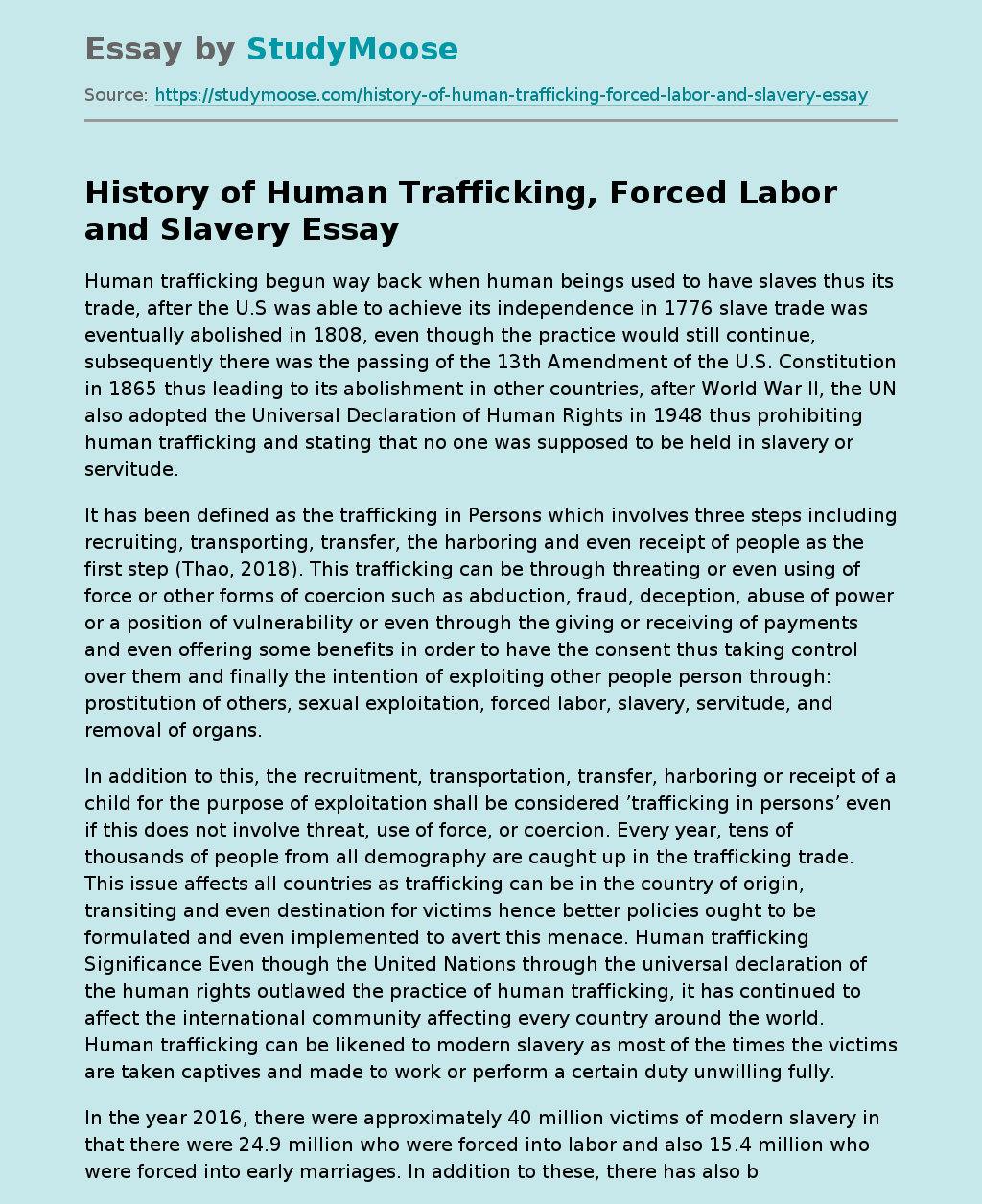