Football is a team sport played between two teams of eleven players each. The objective of the game is to score by directing the ball into the opposite goal. The winner is the team which has scored most goals at the end of the match. The contemporary history of the world’s favourite game spans more than 100 years. It all began in 1863 in England when Football Association in England was formed – becoming the sport’s first governing body. A search down the centuries reveals at least half a dozen different games, varying to different degrees, and to which the historical development of football has been traced back.

Don't use plagiarized sources. Get your custom essay on
“ History of Football ”
Get custom paper
NEW! smart matching with writer

Yet, the fact remains that people have enjoyed kick a ball about for thousands of years. Football is played at a professional level all over the world, and millions of people regularly go to football stadium to follow their favourite team, whilst millions more avidly watch the game on television. A very large number of people also play football at an amateur level.

In many parts of the world football evokes great passions and plays an important role in the life of individual fans, local communities, and even nations; it is therefore often claimed to be the most popular sport in the world. There are many worldwide international competition of football. One of the major international competitions in football is the World Cup organized by Federation International de Football Association. Over 190 national teams compete in qualifying tournaments within the scope of continental confederations for a place in the finals.

The finals tournament, which is held every four years, now involves 32 national teams competing. The next World Cup takes place in Germany 2006.

The history of football is interesting as well as exciting, from the first forms of the game ever played, to the multi million dollar organizations of today. The game continues to evolve and change with the times. Football is a sport that evolved from many different games. Football is mainly known as a different form of rugby or soccer, but there is more to the origin of the game than just those two sports. Football games were played around the world before the game was actually called football. ” Football is believed to have descended from a Greek game called Harpaston ” (Source C). The rules in Harpaston were not very strict.

Running, kicking, or passing the ball across the goal line could earn points. ” It is believed that the Chinese played some form of soccer around 500 A. D” (Source M). The earliest soccer games in England consisted of people running around on a field kicking a skull. This skull kicking game continued until someone had the idea to use an inflated cow bladder, which allowed for the ball to be kicked greater distances and was much easier on the foot of the participants. In the twelfth century, the king of England outlawed the game of “futeball” because it took away from the English tradition of archery.

The game was considered illegal for four hundred years. Once it was allowed to resume, it was called soccer. Another ancestor of football is the Irish game of Gaelic rugby. This game basically consisted of teams trying to advance the ball across the goal line, much like Greek Harpaston. Once the game made it across the Atlantic to America it started to take on characteristics of the game we now call football today. When football crossed the Atlantic Ocean and came to America it would undergo a major change.

Both teams had twenty-five players, which led to mass confusion and chaos, also the goal posts were only twenty-five yards apart, causing a very small field” (Source J). It was obvious that the sport needed some new rules and Mr. Walter Camp was the man to develop them. Walter Camp was a star player and later a coach at his alma mater, Yale University. Walter Camp contributed to the definition of modern-day football more than anyone; he helped change the game from its form of rugby style to the modern game it is today. ” Walter Camp is known as the father of American football” (Source J). As the game grew in popularity more people began playing it, but the game was considered too brutal.

” Before 1905 many injuries and eighteen deaths had been reported from the brutal mass plays, President Roosevelt asked the schools to set rules to save the game from extinction” (Source C). In response to the Presidents plea, representatives from several different schools got together to set some rules, which would forever change the game. “The schools decided that a touchdown should be worth more, so in 1898 it was changed from four to five points, and eventually changed from five to six. While on the other hand the field goal was dropped from five points to four, and then down to three” (Source I).

Another problem with the game is that it was very boring. To help end this boredom Walter Camp came up with the idea of first downs. With this rule, teams must gain ten yards in four attempts or the ball is turned over. To help protect players’ safety, formations like the flying V and wedge were made illegal. Probably the most important rule change was the legalization of the forward pass. To accommodate for this new rule, colleges also created an end zone ten yards deep to allow the ball to be caught in safely. The first professional games took place between athletic clubs.

The first player to play for money was William W. “Pudge” Heffelinger. “Heffelinger played at Yale University where he made the Walter Camp All American team for three straight years. Heffelinger was paid five hundred dollars to play a game for the Allegheny Athletic Association of Pittsburgh. Heffelinger is known as the first professional football player” (Source H). The first professional to sign a contract was Grant Dilbert who signed with the Pittsburgh Athletic Club. Soon after this, many teams started paying money for the best players.

“On September 17 1920 representatives met to form the American Professional Football Association (APFA)” (Source H). In 1922 the APFA was renamed the National Football League (NFL). During this time, any town that could fund the money was forming a football team, even two Philadelphia baseball teams established professional football teams. During this time, professional football was not as popular as college football. Due to betting and recruiting scandals, Americans were not as interested in the NFL as they were in the collegiate games.

The league reached an all time low in 1932 when it had a membership of eight teams. However, over time the formation of legendary teams like the Decatur Staleys, later renamed the Chicago Bears, and the small town Green Bay Packers, and also due to the emergence of heroic players, this new league would win over the hearts of American football fans. One of the first famous football players was Jim Thorpe. Thorpe, an Indian born in Oklahoma, would become a great college player, as well as a great professional player.

“Jim Thorpe signed his first professional contract with the Canton Bulldogs at a price of two hundred fifty a game” (Source H). Although he is considered one of the great players it is believed that Jim did not play his hardest all the time, he played hard only when he wanted to. He also used shoulder pads with a layer of sheet metal under them, so he could hit opposing players even harder. Jim was not just a great football player he was an Olympian as well, winning several medals in the Olympics. Harold “Red” Grange was a legendary college player nicknamed, ? The Galloping Ghost’.

Red helped college fans appreciate the professional game, he signed his first professional contract ten days after his college career had ended. “Red Grange made his professional debut on Thanksgiving day before a crowd of over 10,000 fans, before his arrival in professional football the crowds were usually measured in the hundreds”(Source H). Sammy Baugh and Otto Graham reinvented the passing game of football. They were considered the first gunslingers of football. All of these players helped revolutionize the game. Growing in popularity, the game of football was about to take some huge steps.

“In 1932 the first indoor game was played due to weather, the game was played on an eighty yard field” (Source J). During the Great Depression the NFL thrived, giving Americans something to take their minds off of the hard times. During World War II younger players enlisted so older players were drafted into the league. After the war, the popularity of the NFL grew. “In 1939 the National Broadcasting Corporation was the first station to televise an NFL game between the Brooklyn Dodgers, and the Philadelphia Eagles” (Source F). In 1951 a game between the St.

Louis Rams and the Cleveland Browns was the first to be broadcast from coast to coast. As the professional game grew in popularity it expanded as well. More teams were added while others were dropped. In 1946 when football was very popular in the United States, the American Football League (AFL) was formed. The AFL and NFL would later combine to form what is now known as today’s National Football League. Many people argued about which league was stronger, the American League or the National Football League. Many people believed the NFL was stronger, and others thought the AFL was more powerful.

“Of the thirteen teams in the league in 1920 only the Chicago Bears and St. Louis Cardinals, now the Arizona Cardinals, remain. There have been many classic and memorable moments in professional football history, like Chuck Bednarik’s ferocious hit on Frank Gifford, as seen on the cover of this report, John Elway’s leadership of the Denver Broncos on “The Drive”, the 1972 Miami Dolphins undefeated season, and Joe Montana’s victory-clinching pass to Dwight Clark, which is simply known as “The Catch”. The game of football has a rich history.

It has evolved in many different ways but continues to hold onto the tradition and basic format it was built upon. The game will continue to grow and change with the times but will always be known as America’s greatest game. 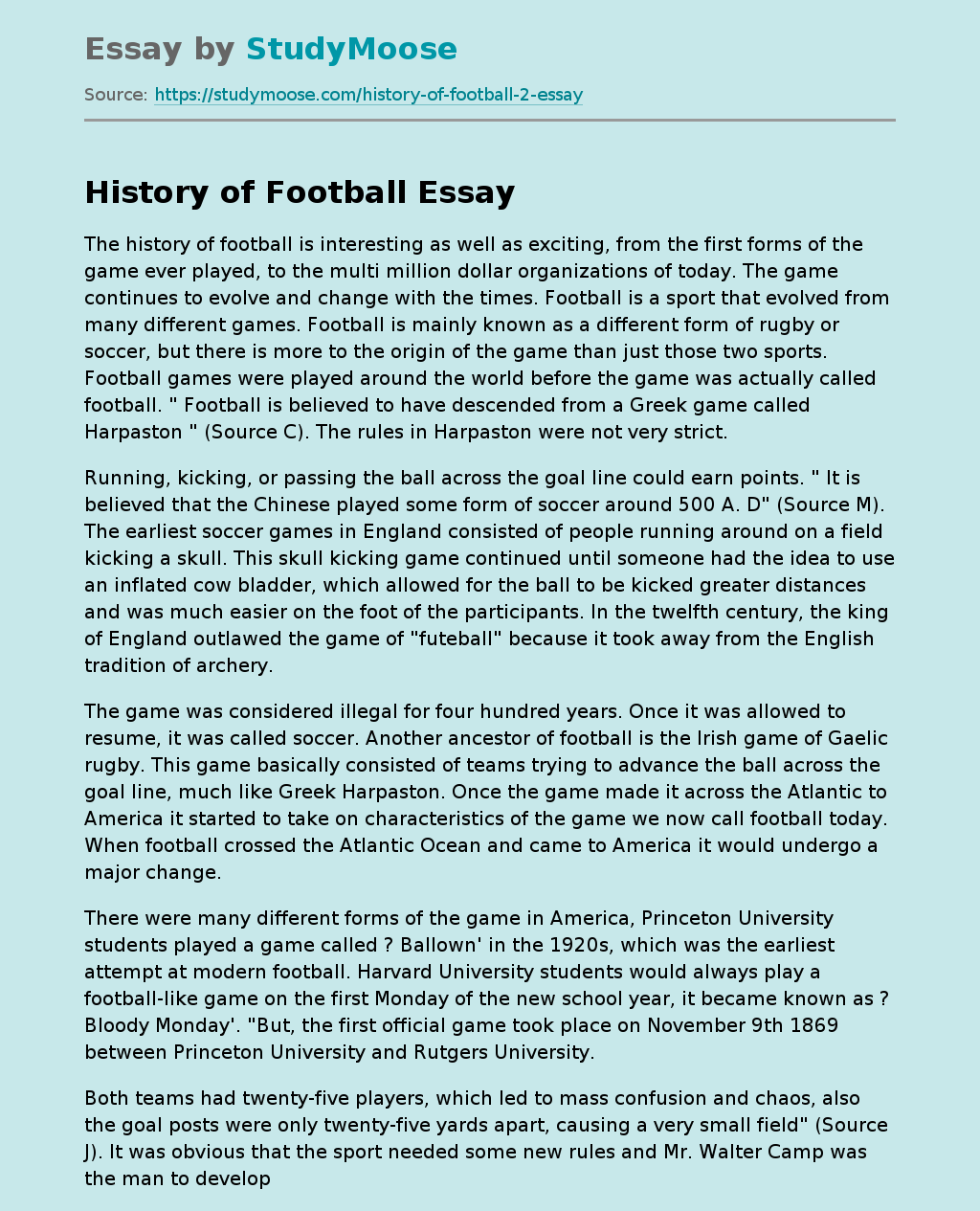