History of Death Penalty in the Philippines

The history of the death penalty was extensively discussed by the Supreme Court in People vs. Echegaray.[1] As early 1886, capital punishment had entered the Philippine legal system through the old Penal Code, which was a modified version of the Spanish Penal Code of 1870. The Revised Penal Code, which was enforced on 1 January 1932, provided for the death penalty in specified crimes under specific circumstances. Under the Revised Penal Code, death is the penalty for the crimes of treason, correspondence with the enemy during times of war, qualified piracy, parricide, murder, infanticide, kidnapping, rape with homicide or with the use of deadly weapon or by two or more persons resulting in insanity, robbery with homicide, and arson resulting in death.

Don't use plagiarized sources. Get your custom essay on
“ History of Death Penalty in the Philippines ”
Get custom paper
NEW! smart matching with writer

The list of capital offenses lengthened as the legislature responded to the emergencies of the times.

A.) No. 1700, otherwise known as the Anti-Subversion Law, which carried the death penalty for leaders of the rebellion. From 1971 to 1972, more capital offenses were created by more laws, among them, the Anti-Hijacking Law, the Dangerous Drugs Act, and the Anti-Carnapping Law. During martial law, Presidential Decree (P.D.) No. 1866 was enacted penalizing with death, among others, crimes involving homicide committed with an unlicensed firearm. In the aftermath of the 1986 revolution that dismantled the Marcos regime and led to the nullification of the 1973 Constitution, a new constitution was drafted and ratified.

The 1987 Constitution provides in Article III, Section 19 (1) that: Excessive fines shall not be imposed, nor cruel, degrading or inhuman punishment inflicted. Neither shall death penalty be imposed, unless, for compelling reasons involving heinous crimes, the Congress hereafter provides for it. Any death penalty already imposed shall be reduced to reclusion perpetua. Congress passed Republic Act No. 7659 (entitled “An Act to Impose the Death Penalty on Certain Heinous Crimes, Amending for that Purpose the Revised Penal Code, as Amended, Other Special Penal Laws, and for Other Purposes”), which took effect on 31 December 1993. [edit]

The accused was meted the penalty of death because rape committed against a ‘child below seven (7) years old’ is a dastardly and repulsive crime which merits no less than the imposition of capital punishment under Article 266-B of the Revised Penal Code. The sentence was also reduced to reclusion perpetua, without the possibility of parole. The case of People vs. Salome[5] involves a rape of a 13-year old girl (who got pregnant), committed in a dwelling and with the aid of a bladed weapon. The imposable penalty should have been death, but with the abolition of the Death Penalty, the Supreme Court reduced the penalty toreclusion perpetua, without the possibility of parole.

The case of People of the Philippines vs. Tubongbanua[6] involves the murder of a victim who suffered 18 stab wounds which were all directed to her chest, heart and lungs. Considering the existence of the qualifying circumstance of evident premeditation and the aggravating circumstances of dwelling, and taking advantage of superior strength without any mitigating circumstance, the proper imposable penalty would have been death. However, with the abolition of the death penalty law, the penalty imposed was reclusion perpetua, without the possibility ofparole. http://phbar.org/wikilaw/index.php?title=Death_Penalty_Law

(1) Excessive fines shall not be imposed, nor cruel, degrading or inhuman punishment inflicted. Neither shall death penalty be imposed, unless, for compelling reasons involving heinous crimes, the Congress hereafter provides for it. Any death penalty already imposed shall be reduced to reclusion perpetua. In mid-1987, a bill to seeking to reinstate the death penalty for 15 ‘heinous crimes’ including murder, rebellion and the import or sale of prohibited drugs was submitted in Congress. 1988

In 1988, the military started lobbying for the imposition of the death penalty. Then Armed Forces of the Philippines Chief General Fidel Ramos was prominent among those calling for the reintroduction of the death penalty for rebellion, murder and drug-trafficking. The military campaign for the restoration of the capital punishment was primarily against the CPP-NPA, whose offensives then included urban assassination campaigns. Anti-death penalty groups including Amnesty International opposed the bill, but the House of Representatives voted for restoration by 130 votes to 25. 1989

Three similar bills were put before the Senate. After a bloody 1989 coup, President Aquino certified as urgent one of these bills on the prompting of Ramos. The said bill again proposed death penalty for rebellion, as well as for sedition, subversion and insurrection. 1990

A series of high profile crimes during this period, including the murder of Eileen Sarmenta and Allan Gomez, created public impression that heinous crimes were on the rise. The Ramos administration succeeded in restoring death penalty. 1992

President Fidel Ramos during his first State of the Nation address declared that his administration would regard the restoration of the death penalty a legislative priority, and urged Congress to take speedy action. 1993

Republic Act No. 8177, which mandates that a death sentence shall be carried out through lethal injection, was approved on March 20, 1996. Estrada administration

Seven death convicts were executed during the Estrada administration before he announced a moratorium on executions. 1999 Leo Echegaray, 38, was executed by lethal injection on February 5, 1999. He was the first to be executed after the Philippines restored death penalty. It was the Philippine’s first execution in 22 years. Six more men followed within the next 11 months.

On March 24, 2000, Estrada imposed a de facto moratorium in observance of the Christian Jubilee Year. He also granted 108 Executive Clemencies to death convicts.

On December 10, 2000, Human Rights Day, Estrada announced that he would commute sentences of all death convicts to life imprisonment. He expressed his desire to certify as urgent a bill seeking a repeal of the Death Penalty Law.

While the Arroyo administration has been characterized by a flip-flopping stand on death penalty, no death convict has been executed under her watch. Voting separately, the two Houses of Congress on June 6, 2006 repealed the death penalty law. Arroyo signed Republic Act 9346 on June 24, 2006.

Section 1. The imposition of the penalty of death is hereby prohibited. Accordingly, Republic Act No. Eight Thousand One Hundred Seventy-Seven (R.A. No. 8177), otherwise known as the Act Designating Death by Lethal Injection is hereby repealed. Republic Act No. Seven Thousand Six Hundred Fifty-Nine (R.A. No. 7659), otherwise known as the Death Penalty Law, and all other laws, executive orders and decrees, insofar as they impose the death penalty are hereby repealed or amended accordingly.

History of Death Penalty in the Philippines. (2017, Jan 04). Retrieved from https://studymoose.com/history-of-death-penalty-in-the-philippines-essay 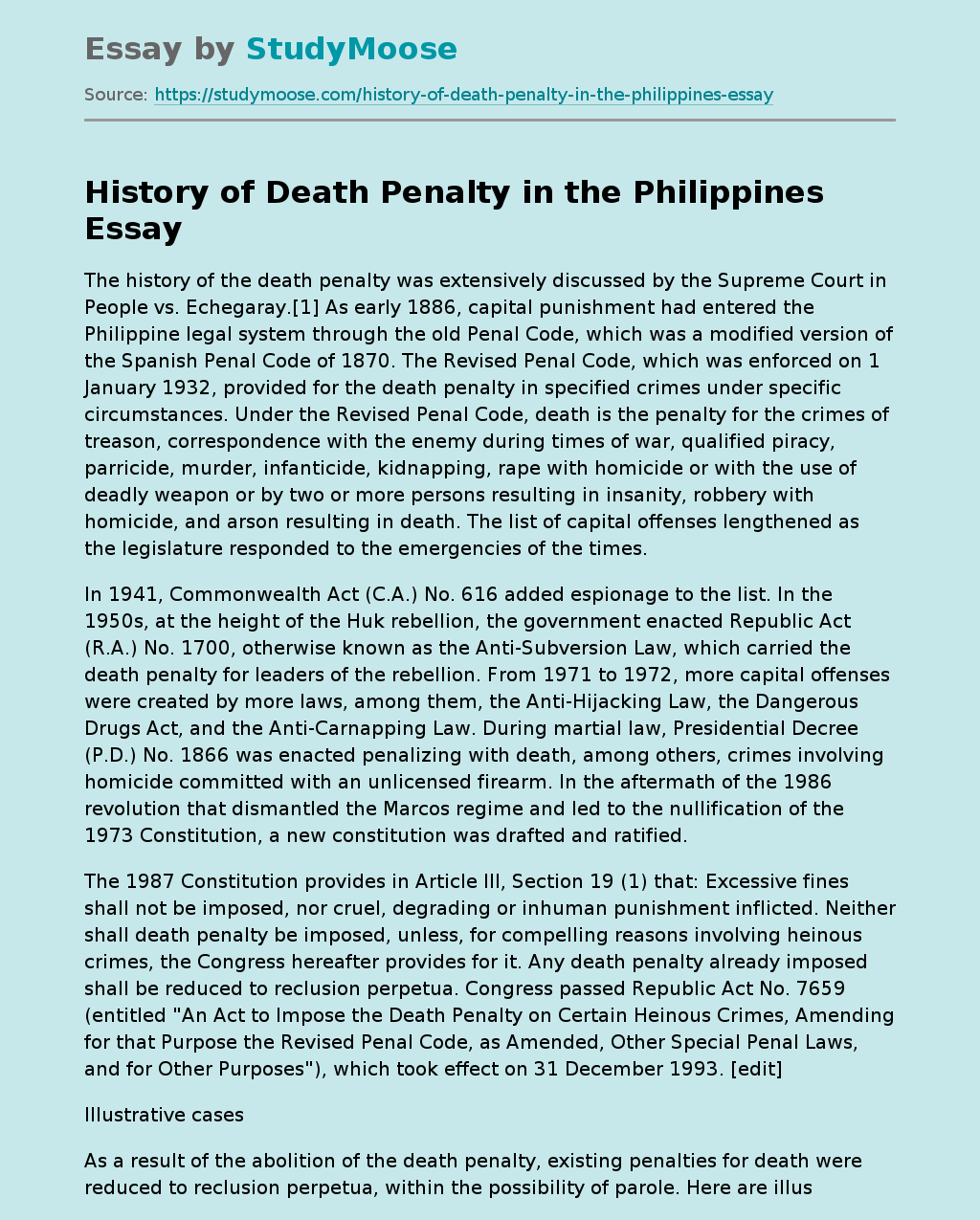