Behavior Modification is defined as the use of rewards or punishments to reduce or eliminate problematic behavior, or to teach an individual new responses to environmental stimuli.

The goal of a behavior modification program is to change and adjust behavior that is inappropriate or undesirable.

Behavior modification can be traced to lab research as far back as the 1800’s and 1900’s. Most of this research was done through experimenting with animals.

Many had impacting research, here are a few.

-Pavlov’s famous dogs: Gastric secretions were stimulated at the sight of food (a reflex response). Indicated that digestive processes could be stimulated without direct contact.

-He then focused his research on how connections were made between environment stimuli and reflex reactions.

This type of learning became know as Classical Conditioning.

-Classical conditioning is concerned with stimuli that evoke involuntary or automatic responses.

-Focused on the learning of new behavior.

-Well known for his research involving cats and a puzzle- box.

-Placed hungry cats in a maze and timed how long it took for them to reach the food at the end of the puzzle. He found that the cats got faster and faster. (learned behavior)

-From this research Thorndike formed laws of behavior, one of the most famous being the Law of Effect.

-Like Thorndike, Skinner focused on learning that resulted from consequences.

-From his research, such as, the Skinner Box, the pigeon project, and the baby box, Skinner stated that all behavior is followed by a consequence, and that consequence determines the likeliness of repeating that behavior.

-When an association between a behavior and a consequence is formed it is known as Operant Conditioning.

-Operant conditioning is learning that is based on a trial and error process in which a subject remembers what behaviors have elicited positive, pleasurable, responses and which elicited negative ones.

The use of rewards to help affect this increase in appropriate behavior is called positive reinforcement- i.e.–strokes, gifts, more privileges, etc.

The use of punishment is called negative reinforcement. i.e.–spankings, withdrawal of privileges, etc.

To stop an inappropriate behavior, first the behavior must be observed. Then, a pattern can be recognized and a system of rewards can then be constructed.

Using positive reinforcement, a choice is presented and if a desired action occurs, a reward is presented.

If undesirable behavior takes place no reward would be given. This is an example of negative reinforcement.

As the juvenile justice system enters a new era, it is faced with major challenges. Each year it is estimated that police arrest nearly 2 million youths under the age 18 on criminal charges. Nearly 10,000 children under 17 appear before judges in the Cook County Circuit Court Juvenile Justice Division every year. The court refers many of these to the juvenile probation department because they offer several alternatives to detention. Electronic monitoring, home confinement, and intensive supervision are among their abundant services. With the collaboration of social service agencies and community-based organizations, the department works to afford every youth in its supervision structured programming and services. All services are performed with an emphasis on public safety while also attending to the needs of minors.

The current mission statement of the Juvenile Probation Department is as follows:

“To serve the welfare of children and their families within a sound framework of public safety. The Department is committed to providing the guidance, structure and services needed by every child under its supervision. In partnership with the community, the Juvenile Probation Department …directs delinquent children toward reforming their behavior and making responsible decisions according to the principles of Balanced and Restorative Justice.”(cookcountycourt.org)

Alongside this mission the probation department has a prescribed set of objectives that it operates under that assists them in being able to effectively respond to the increasingly complex need of delinquent children. Of the 8 goals named in conjunction with the mission there are two that spotlight principles set forth by the balanced and restorative justice initiative.

*To assist the court in developing interventions that serves the needs of the minor and facilitates the restoration of the victim and the community.

*To instill in all children a sense of responsibility for their actions and a belief in their own innate value and potential through a combination of individualized attention and community networking (cookcountycourt.org).

Prior to the Juvenile Justice Reform Act of 1998 the department always encouraged community involvement. But, a more sophisticated approach has been implemented to create equilibrium between the offender, the victim, and most importantly the community affected by the crime committed.

They believe no child is beyond the realms of rehabilitation. They are confident that any child can benefit from rehabilitation and treatment. With these realizations in mind, and an increase in juvenile offenders, the probation department has moved away from locking youth up and taken a kinder, gentler approach in dealing with troubled youth. Innovative alternatives to detention are becoming more prevalent worldwide, especially within the confines of juvenile probation.

Several program improvements and changes in legislation can be in part credited for these changes. However, the most important factor responsible for effecting change in the mission of the department is the Juvenile Justice Reform Act of 1998. This reform has put in a call to ” strike a balance between the juvenile justice system’s long standing orientation toward rehabilitation and the more recent trend toward a more punitive system that holds juveniles accountable for their actions”(ICJIA).

The adoption of the balanced and restorative justice plan is outlined in a purpose and policy clause of the Act. Cook County Assistant State’s Attorney Randall Roberts, one of the principal facilitators of the legislation, says the clause gives “specific guidance to judges, as well as others who work in the system” (ICJIA). With the introduction of this reform the probation department and other agencies working within the juvenile justice system have had to reassess their objectives in a manner that addresses the communities’ need for balance.

Keeping the Promise to America’s Youth

Nearly five years after this reform the juvenile justice system has recognized the benefits both the system and the child receive when cases are referred for probation instead of detention. Children are indeed responsive to intervention, supervision, mentoring, and other forms of growth and development offered by probation. Proof can be seen in the stories of the 19 men and women in Second Chances who’s lives changes because of the flexibility and leniency of the juvenile justice system. Without the commitment and service of probation departments nationwide such successful second chances would be hard to obtain.

aftercare focuses on reintegration into the community, using a counselor. This counselor includes the family and community when assessing their method of care. After a program is made to suit the individual, there is strict supervision, used in conjunction with rewards and sanctions available to the successful candidate. 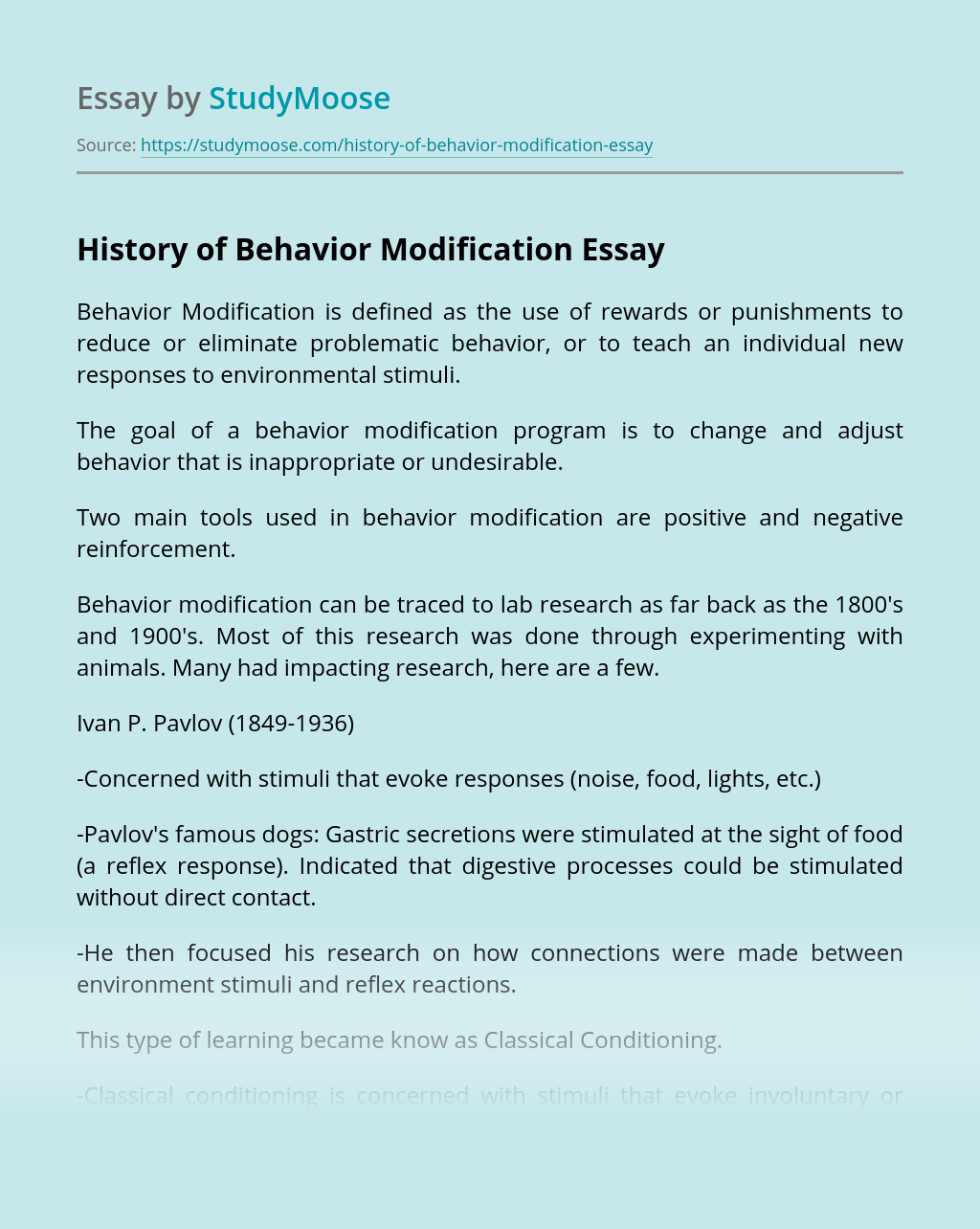 Don’t waste time
Get a verified expert to help you with History of Behavior Modification
Hire verified expert
$35.80 for a 2-page paper
Stay Safe, Stay Original