“… early in the morning of June 6th, 1944 under cover of a massive air and naval bombardment, ships started ferrying 150 000 American, British, and Canadian troops across the channel of Normandy.” After courageous fighting and tremendous struggles, the Canadian, American, and British troops managed to get the farthest inland to secure a position against allied invaders. “…the German defences at Juno Beach had been shattered and Canada had established the beachhead.”

Because Canadian troops were able to secure the beach, “Operation Overlord” led to great victories amongst the Allied Troops.

Juno was the largest amphibious battle to have taken place in history. “155,000 soldiers, 5,000 ships and landing craft, 50,000 vehicles and 11,000 planes were massed for the greatest seaborne invasion in history.” Canadian troops, being the only commonwealth nation, were assigned 1 out of the 5 beaches at Normandy to secure. First, Canada was to create a beachhead on Juno beach. The American, Canadian and British troops task was to capture and seize all sea towns ashore of the beach and get further inland after breaking through enemy lines.

Also, their objective was to secure the Carpiquet airport and create a link that would be able to attach the British beachheads on the other two beaches, Sword and Gold beach, and also to secure the Caen-Bayeux highway.

“The challenge facing the Canadians was to overcome the coastal defences and capture ground positions that could be defended against German counter attacks.” The task the Canadians were given was one that would take a lot of courage and self-determination to push through. “… Germans had turned the coastline into a continuous fortress of guns, pillboxes, wire, mines and beach obstacles.” Although the Germans had displayed strong thresholds, the allied troops managed to keep pushing their way through German defences. With the lead of Major General R.F.L Keller, the 3rd Canadian Infantry along with many men, tanks, and vehicles helped to secure and take over Juno Beach. “The 3rd Canadian Infantry Division supported by the 2nd Canadian Armoured Brigade would land on Juno beach in brigade groups. Two brigades would land in the initial assault followed later by the reserve brigade which would pass through the lead brigades on to the divisional objectives.

More than 20,000 men, 200 tanks and hundreds of other vehicles were under the command of Major-General Keller.” The allied troops were successful in securing the position on Juno beach. “…in the face of heavy shelling and deadly machine gun fire, the Canadians fought their way past the German defences.” The troops were able to penetrate farther inland then all other allied forces could. Securing Juno beach was a huge success and as a result, has helped Canada to become a greater nation. Since Juno Beach, the troops that were involved with the invasion are greatly recognized and forever appreciated. Securing Juno Beach may have been one of the best things to have happened. After having done so, many great victories came along. They extended their beachhead further inland, and continued to move northwestward.

They were able to liberate several French channel ports, which included Dieppe, which was a great success, because a number of Canadians had lost their lives at such place two years back. Also, because of such a great achievement at Juno Beach, the liberation of Europe took place, along with the defeat of Nazi-Germany, which lead up to the end of World War 2. The defeat of Nazi-Germany became a very proud accomplishment for many. “Allied to serve the common cause of freedom and democracy, Canada, Great Britain, the United States, the countries of the British Commonwealth and free nations suffering under Nazi occupation counter-attacked.” Due to Canada being able to accomplish many victories, they proved that coming together as a nation could lead to great victories and successes. Also, it helped make and build the independence of Canada. It showed that Canada is a powerful country, and doesn’t need to hold hands with Britain per se, but still work together.

“So many different roads to Victory, conquered through determination and courage and at the price of many human lives.” Although “Operation Overlord” took the lives of many brave soldiers, it was one step closer to the complete defeat of Nazi-Germany. With great success comes a price, and although the capture of Juno Beach was accomplished, many soldiers were wounded, killed, or captured. “Fourteen thousand Canadians landed in Normandy on D-Day and to ensure the victory 340 Canadians had given their lives. Another 574 had been wounded and 47 taken prisoner. The casualties were less than expected, but heavy nonetheless.”

Despite the many loses Canada suffered, soldiers were still encouraged to move forward and keep on fighting. The Canadian troops relied heavily on goods and services that were being shipped to them. The government greatly supported the troops, providing them with the many necessities needed to be successful. “Canadian troops relied on a tight organization and on a wide range of services that provided food, shelter, medical care, intelligence, communications and more. They also relied on ships, aircrafts, tanks and weapons needed to face the enemy.” Funding for the invasion was very costly, but in conclusion, led to great victory for the allied troops. Canada at the Battle of Normandy had a great impact on war. It changed the way many thought of the word “impossible.” After what was done, and how much was conquered, anything is possible.

Being able to get further inland than any other before and securing a position that later on led to the liberation of Europe and the defeat of Nazi-Germany isn’t just a small accomplishment, it’s something that has changed the way war is seen and the way troops continue to fight. Without the necessary goods and services being sent over to the allied troops, not much would have been possible. Many brave troops stood against German defences and took their lives so the rest of their brothers could continue on and make Canada proud. “Many would die there but, for the Canadian forces, D-Day was a triumph that is still honoured at home and on the beach they called Juno.” It is with great success that Canada as a nation, is able to say proudly that they fought strongly to secure Juno beach on June 6, 1944, and because such a great event took place, the rise of a nation began. 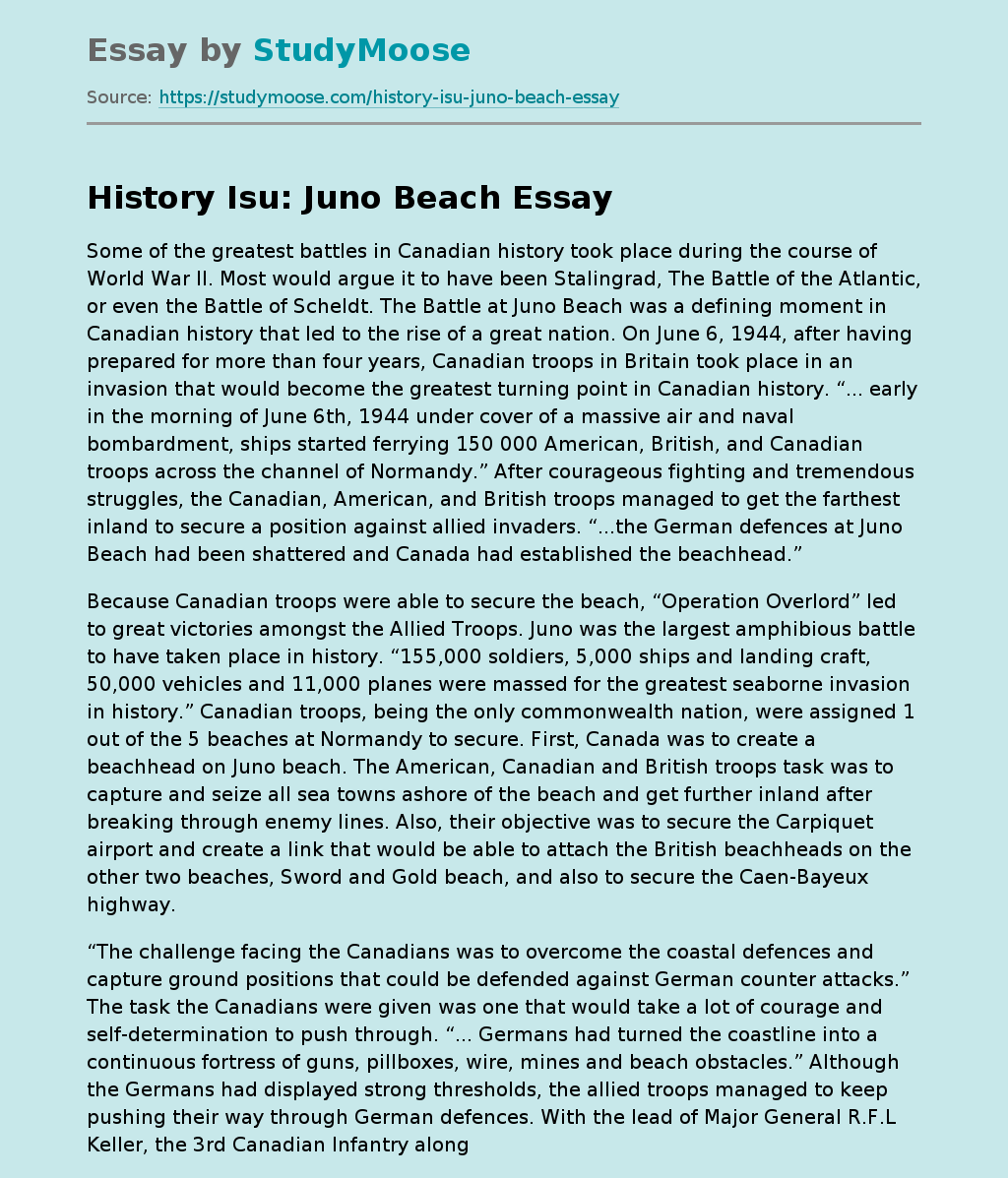