History of Andy Warhol’s life you might not know

Pieces of art always shock us by their unusualness, fancifulness, and loveliness. Each of us has own ideas of beauty, but everyone will admit with unique beauty and richness of Andy Warhol’s works. Are there people in the world who didn’t recognize the Andy Warhol’s name? Maybe a little quantity exists; nevertheless, this talented and skillful artist wasn’t always like this. Let’s go into some details!

Andy Warhol was born in 1928 in the USA, but his family was from the territory of modern Slovakia.

Don't use plagiarized sources. Get your custom essay on
“ History of Andy Warhol’s life you might not know ”
Get custom paper
NEW! smart matching with writer

As his family was a working-class, he knew that only by hard work you could gain success. But life wasn’t and isn’t easy for people like Andy; he got a very serious illness that causes involuntary movements of the body. Starting from the 3rd grade he couldn’t think about hard work, but he didn’t give up. He drew, painted, listened to the radio and stringed posters of film stars all over his room.

Isn’t it obvious that this period became a very important one while growing up and in developing his personality and preferences?

When he was studying at school, he won Scholastic Art and Writing Award. Imagine, after high school; he became a professor of commercial art; actually, his life was full of art. It would be strange if he became someone else that a famous artist. Also, Andy Warhol worked in a student art magazine “Cano” as an art director. And it is believed that premiere two published artworks where exactly in “Cano.

” Later he moved to New York where all “the party started.” He even drew shoes for “Glamour” magazine. What is interesting is that Warhol developed his own technique “blotted line” after being a teacher of Max Cohn who also taught him how to do silkscreen printmaking. Then in the 1960s, real popularity came to him: all those exhibitions in the most famous galleries of New York.

It was exactly during 1960s when Warhol began making paintings for popular brands like Coca-Cola, Campbell’s soup cans, and celebrities: Marilyn Monroe, Elvis Presley, Marlon Brando, Elizabeth Taylor, newspaper headlines, photographs, and when he founded his famous studio “The Factory” gathering around him all popular artists, musicians, writers. He was the star.

In 1962 he painted his famous portrait of non-frozen Campbell’s soup. The first question of each person will be: “What’s so famous in the pictures where the same cans are painted?” But Andy made it normal to put ordinary things into art and proved that those things had so much life than any other thing can have.

To prove my words – here 16 facts about Andy Warhol and his soup cans come:

1. This picture is not a copy.
You may think that this picture is just full of repetitive soup cans; a simple advertisement if you want. The modern viewer will think so and turn this page off, but look carefully. Each of those little pictures on the big one is different! He painted them one by one writing down only different tasted of that soup: tomato, beef, vegetable… Moreover, he places them on that rank they were produced on the factory. And what’s more, they are painted without any copying machine, JUST by hands; that’s hilarious!

2. Andy Warhol as a copying machine.
How did he do that? That’s matters. He bought all the kinds of soup, and one by one put them on the paper to make an outline, to see the size and memorize all the details. He hoped on his brain, which will help to reproduce the can. And he did it right. The work was a series of 32 different 20-by-16-inch paintings-one canvas for each Campbell’s variety on the market. Crazy but exciting.

3. Do you think it was easy?
As he was doing one can after another, parts of the day where changing, and that’s why the gradation of white and red color are different.

4. Not only Campbell was satisfied with that work.
Art dealer Irving Blum was impressed and proposed Warhol a show at the Ferus Gallery in Los Angeles. Blum staged the series of soup can paintings on grocery store shelves that lined the length of his groundbreaking gallery.

5. Those cans made a history; how did he get the point of that?
An answer is simple. He once said: “I just paint things I always thought were beautiful, things you use every day and never think about.” And THAT is what differentiates common people from talented ones. We look – they see.

6. Where is the real soup can?
When his exhibitions were being provided, the not only painting was on the wall. Also, organizers set a real Campbell’s soup cans for comparison; and people were in a pleasant shock.

7. What was the price of each can?
Price of one can be extraterrestrial on that money; 100 dollars for one can. But Warhol did the next – on the window with a pyramid of soup cans he made a sign: “Get the real thing for only 29 cents a can”. And it worked; because only six people bought the piece of Warhol painting. From the commercial view, it was a catastrophe. Sales were low, and Blum soon realized that selling the cans individually would destroy the power of the pieces as an ensemble, That’s why Blum bought back the few sold paintings to keep the 32 canvasses together as a complete set. Warhol cut Blum a price break for buying them all: $1,000, paid in ten monthly installments. Nice investment.

8. When they gathered all the cans, it helped the painting survive and become that popular now.

9. Of course, after the popularity of those paintings, Campbell’s became a frequent guest of Warhol.

10. This painting became the best work of Warhol’s career.

12. Blum made a great investment.
In 1996, Blum sold the set to New York’s Museum of Modern Art for a tidy $15 million. I wish I were Blum, but let’s be happy about that happy guy

13. Why did he take that soup?
He famously said he just liked it; he tasted it and drank it for 20 years. He had internalized the soups both literally and metaphorically.

14. What was next?
Next was the popularity; he even painted a picture of Coca-Cola. And on the question why Coca? He answered: “What’s great about this country is that America started the tradition where the richest consumers buy the same things as the poorest. You can be watching TV and see Coca-Cola, and you know that the President drinks Coca-Cola, Liz Taylor drinks Coca-Cola, and just think, you can drink Coca-Cola, too.” Wise, simple and touché!

15. Warhol as the director and producer.
He could continue to create paintings, but in 1965 he concentrated on making films. When it comes to paintings – Warhol was accepted alive, with films situation wasn’t the same. Only after his death, they attracted widespread interest, and Warhol is now seen as one of the most important filmmakers of the period, a forefather of independent film.

16. Period with Marilyn Monroe.
After her death, an artist saw that newspapers print only a black-and-white photo of her. Finally, he painted a series of images in different colors. That popularized her and him together.

Next period of his life wasn’t that much prosperous. In 1968, Valerie Solanas, an actress, who appeared in his film “I, a man,” a woman-feminist, shot him. He didn’t die, but after that, he couldn’t do things with that power he did before. He was simply scared of her.

In simple words, Andy Warhol is an irony; sounds strange but he is. He was a skilled social networker and a publicity master. He was fascinated by the power of media and skillfully built the mystique of his personality. His success was enhanced by his relentless ambiguity, deliberate mystification, and complete separation from his work. His ambiguity and deadpan presentation of himself and his work have made him irresistible in attracting an audience and keeping his publicity.

The fact he named his studio “The Factory” is also ironic. He hadn’t made art in a studio; he had turned it out with assembly-line regularity in a populous workshop “The Factory.” The ambiguity about his work and his personality open the possibilities for interpretation.

Warhol has been the subject of numerous retrospective exhibitions, books, and feature and documentary films. The
Andy Warhol Museum in his native city of Pittsburgh, which holds an extensive permanent collection of art and archives, is the largest museum in the United States dedicated to a single artist. Many of his creations are very collectible and highly valuable. The highest price ever paid for a Warhol painting is $105 million for a 1963 canvas titled “Silver Car Crash (Double Disaster)”; his works include some of the most expensive paintings ever sold.

This boy did it. He achieved success.

History of Andy Warhol’s life you might not know. (2018, Feb 28). Retrieved from https://studymoose.com/history-andy-warhols-life-might-not-know-essay 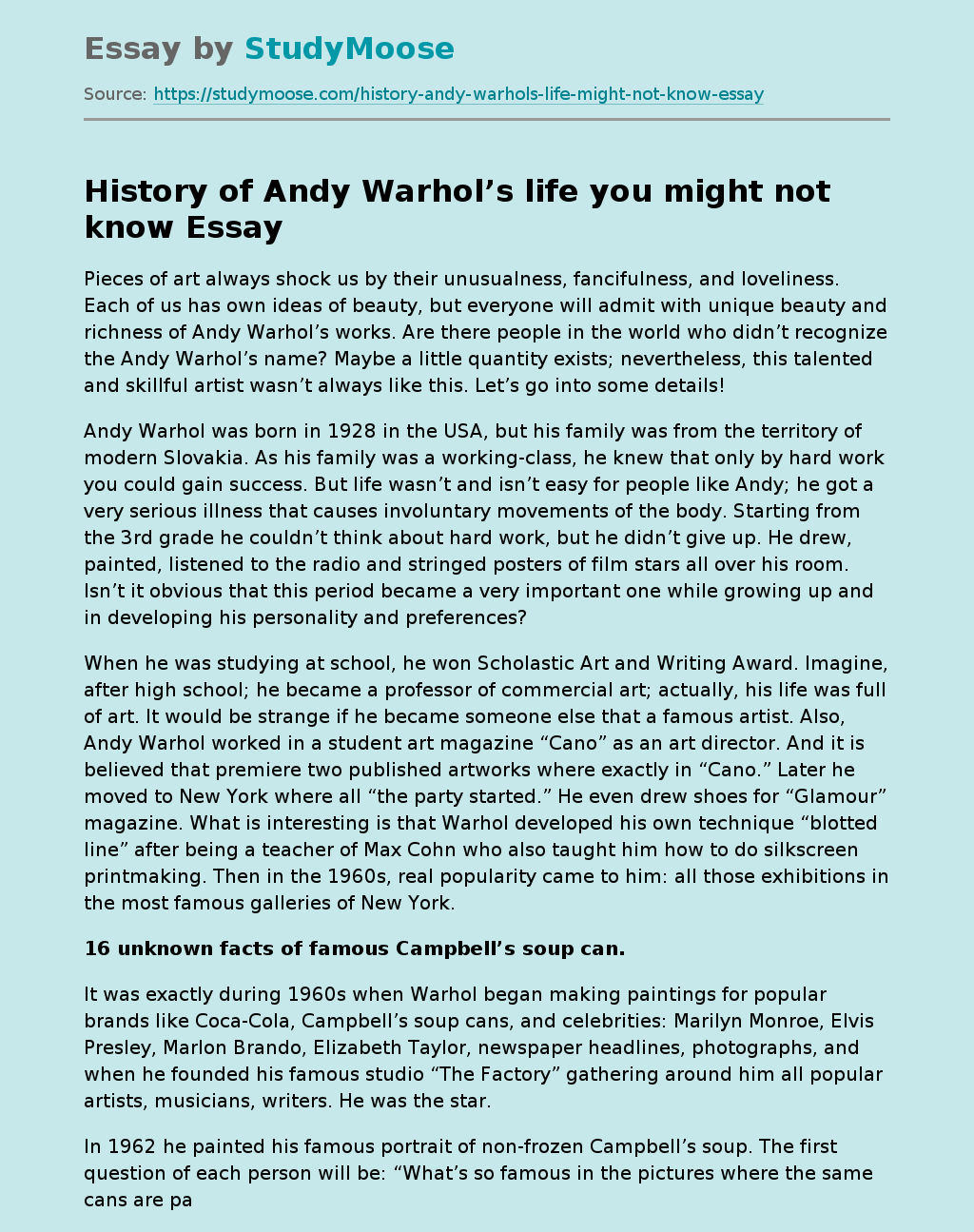