History and Memory: The Fiftieth Gate

History and memory are both needed to uncover human experiences. We are already aware, from ourselves, that memory can be defined as recalling or recognising ones past and previous experiences and events; however memory is dependent on one’s involvement and personal perception of their past. History is the meaning of documented records of past events, usually written as a chronological account.

Both history and memory share a deep relation to the truth, however, also give separate meanings. History relies on memory as it cannot be created without one’s records of facts on past events.

Don't use plagiarized sources. Get your custom essay on
“ History and Memory: The Fiftieth Gate ”
Get custom paper
NEW! smart matching with writer

At the same time, memory can be influenced by history as one cannot keep recollections of their past life without having experienced it. Humans can come to a state of realisation through the fact that memory can be something that is possible to be flaw.

An individual’s current emotions, opinions or understanding on their past experienced event can influence them to change their memory of that event, thus re-writing the history of their personal lives.

This same fault can also coincide with the flaws that occur in the documentary evidence of history, which influences memory. Doctor Mark Raphael Baker’s narrative text, ‘The Fiftieth Gate’, reveals the nature of history and memory through his attempts to record his parents’ stories and experiences, as Holocaust survivors, in order to allow a better understanding of his identity and experience in human history.

His particular profession as an historian, lecturing in modern Jewish history at the University of Melbourne, was responsible for his desire to explore the past of his parents, Yossl and Genia.

It is also through this profession that allows us to see the connection between history and memory, as well as the tension and conflict that may arise as a consequence of this connection. Baker’s study, of history and memory, in hope to enter his parent’s recollections becomes a confrontation with the terror of his parents’ childhood.

‘The Fiftieth Gate’ uses a range of textual forms that allows us to gain an understanding between the rich connection of history and memory, in which Baker takes to provoke his parents’ experiences, both past and present; providing us with an insight of its complex link. Yossl’s and Genia’s stories are told in both their own words and evidently proven through the use of documented records, that Baker finds, in the Yad Vashem archives in Jerusalem.

Yossl Bekiermaszyn, born in 1927 before, recalls his childhood town of Wierzbnik as having green fields, forests, snow, rivers – a normal life in a normal town. Baker believes that Yossl has a very accurate memory of his past; this is evident from Yossl’s clothing business as he has an outstanding ability to recite everything about his clothing; whether it is its fabric, size, weight, structure, price, colour, etc.

Yossl’s explains that during his childhood before the Second World War, his family owned a shop in the local area and were financially stable. His parents would help out friends and family when they were in desperate needs during The Great Depression. Yossl’s family members died between 1940 and 1945. His father, Leibush, and mother, Hinda, both died in death camps.

History and Memory: The Fiftieth Gate. (2016, Apr 27). Retrieved from http://studymoose.com/history-and-memory-the-fiftieth-gate-essay 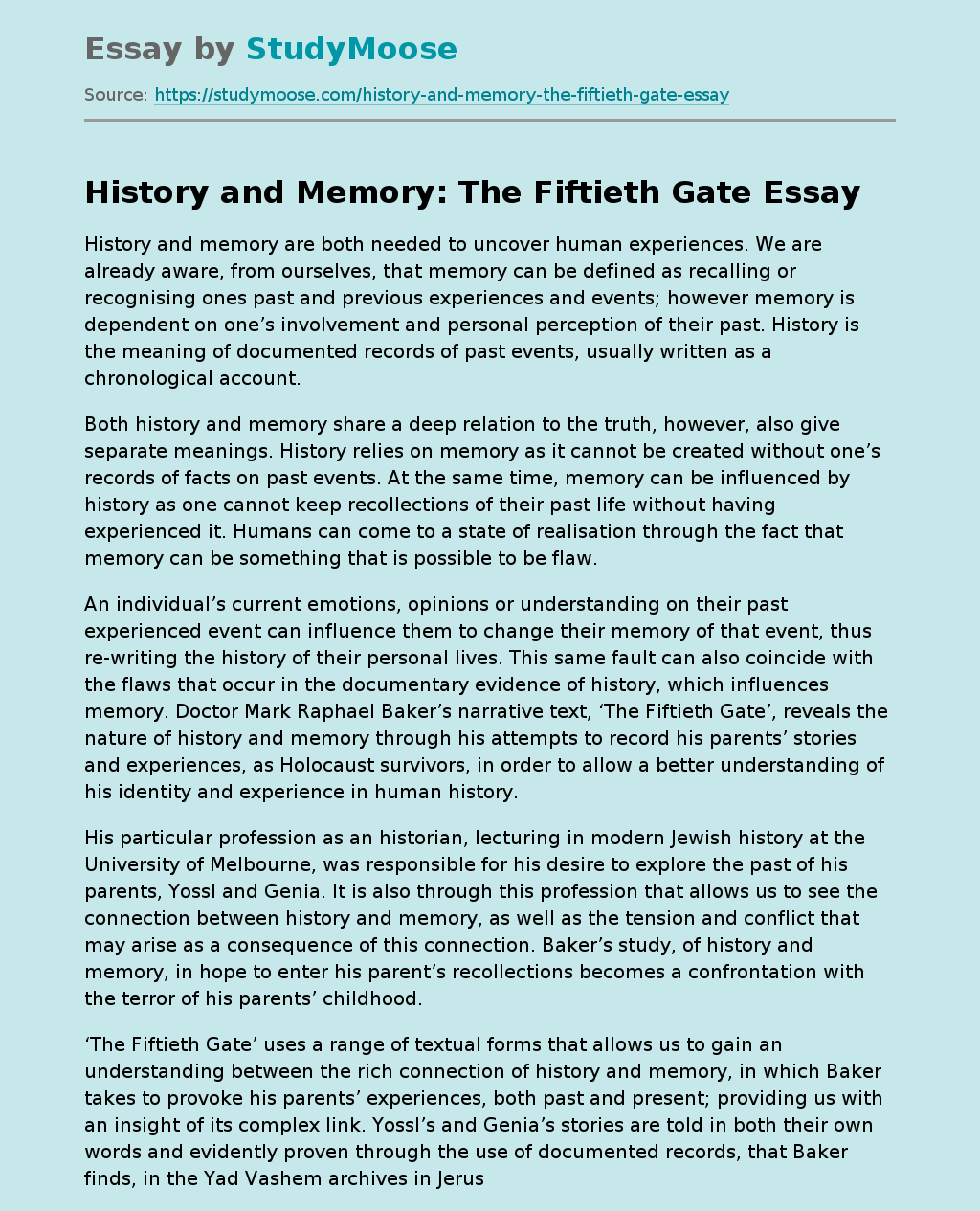