After hundreds of years of male dominance, now we live in an era where females are being given equal rights and another example is the European Court of Justice as in that 51 percent of the unions population are females. There was a time when females in Saudia Arabia were not allowed to drive a car. But recently permission has been granted to provide driving licenses to the females

However, Its been agreed that gender equality is being implemented nowadays but to an extent.

Don't use plagiarized sources. Get your custom essay on
“ Historical Overview on Gender Equality ”
Get custom paper
NEW! smart matching with writer

As it would be a immature saying that it is being implemented everywhere. Every area in todays world has different situation. As we discussed that the European court of justice population of females is 51 percent. But this does not mean that gender equality is everywhere as in Saudi Arabia females are still not allowed to vote as in democracy everyone has the equal right to vote. Also while taking decisions in-home, we agree that females are involved in the decision making process, but the final decision is up to the males, they will do what they want so still this lack gender equality.

Furthermore, females have free will to work in today world but still there is a pay gap between males and females which leaves a question mark on the gender equality, males are being paid more then the females even sometimes in the same tasks as well. Moreover in Asian countries such as Pakistan and India there are still some places where females are even not allowed to study.

They are even not allowed to make their own decisions. This is due to the lack of education in both the nations. But as the time is passing the literacy rate is being improved in India and Pakistan and so the thinking of the people is also being improved. Under representation of females than males is also an issue. A theory that showcases the reasons of underrepresentation of females than males is the ‘ Social Role Theory ‘ ( Eagly,1987). The main argument given here by Eagly (1987) was that women reproductive, nurturing and family roles makes them unfit to travel and carry on with high stress jobs. Similarly he argued that male strength and size makes them a better fit for high stress jobs and mentally draining jobs where the women tend to be underrepresented. Consulting biological differences men are found to be higher at testosterones hormones which relates having high level of competitiveness, aggressions whereas females are to been seen to have high levels of oxytocin which than relates to having element of warmth and kindness etc.

Looking into the empirical evidences which supports the above arguments given by Eagly (1987). 80 to 85 percent of male graduates are employed whereas only 65 percent female graduates are employed. As the number of enrolments at the universities between 2014 to 2017 that a total of more than 436k females enrolled and a total of 321k males. Males having a higher employment rate and lower number of enrolment directly relates to the arguments given by Eagly ( 1987 ) in his social role theory. In recent reports 2.4 million unemployed women said that they want to find employment, and nine out of 10 people want to see men and women equally represented in leadership positions. Women have never been in a stronger position to lead, change and shape the economic, social and political landscape. Income inequality has risen faster in the UK than any other OCED country and today women earn on average £140,000 less than men over their working careers, (Abigail Player, 2013, guardian.com). Equal pay act was also introduced in 1970. On 7th June 1968, 850 women machinists working at the Ford Factory in Dagenham went on strike for equal pay after discovering they were being paid 15 percent less than men for doing the same work. The demands of these women paved the way for the enactment of equal pay legislation in 1970. The Equal Pay Act introduced an ‘implied equality clause’ into all employees’ contracts. This had the effect of eliminating separate lower women’s rates of pay. All such rates had to be raised to at least the lowest male rate over a 5 year period between 1970 and 1975. Nearly 40 years after the introduction of the Equal Pay Act 1970 the struggle for equal pay still persists. The gender pay gap in Britain remains among the highest in the European Union with women earning 15.5% less than men. The equal pay has now became part of the Equality act 2010, ( neu.org.uk).

With the time period, Gender equality has became a common debate in every part of the world. Almost every person is now familiar with its importance in a society. Comparing the current situation of gender equality with the situation of few years back is totally different. We have seen a dramatic change as many positive steps were taken regarding gender equality all around the world as I have mentioned above about the equality in the Olympic games etc. In countries like Pakistan and India, People with traditional thinking have updated their thoughts and the thinking of societies have also changed, As many of the businesses in Pakistan and India are now owned by females, These females entrepreneurs are the clear examples of the change in order to have gender equality. In today’s era, Females are having full right to speak on any forums as the foreign minister of India is a women and in Pakistan special seats are being reserved for the females in the assembly so that they can speak up for the issues of the people. The areas which still lack gender equality will soon be given equal rights as gender inequality has became a common issue worldwide. Hopes are still alive. Hope for the best. 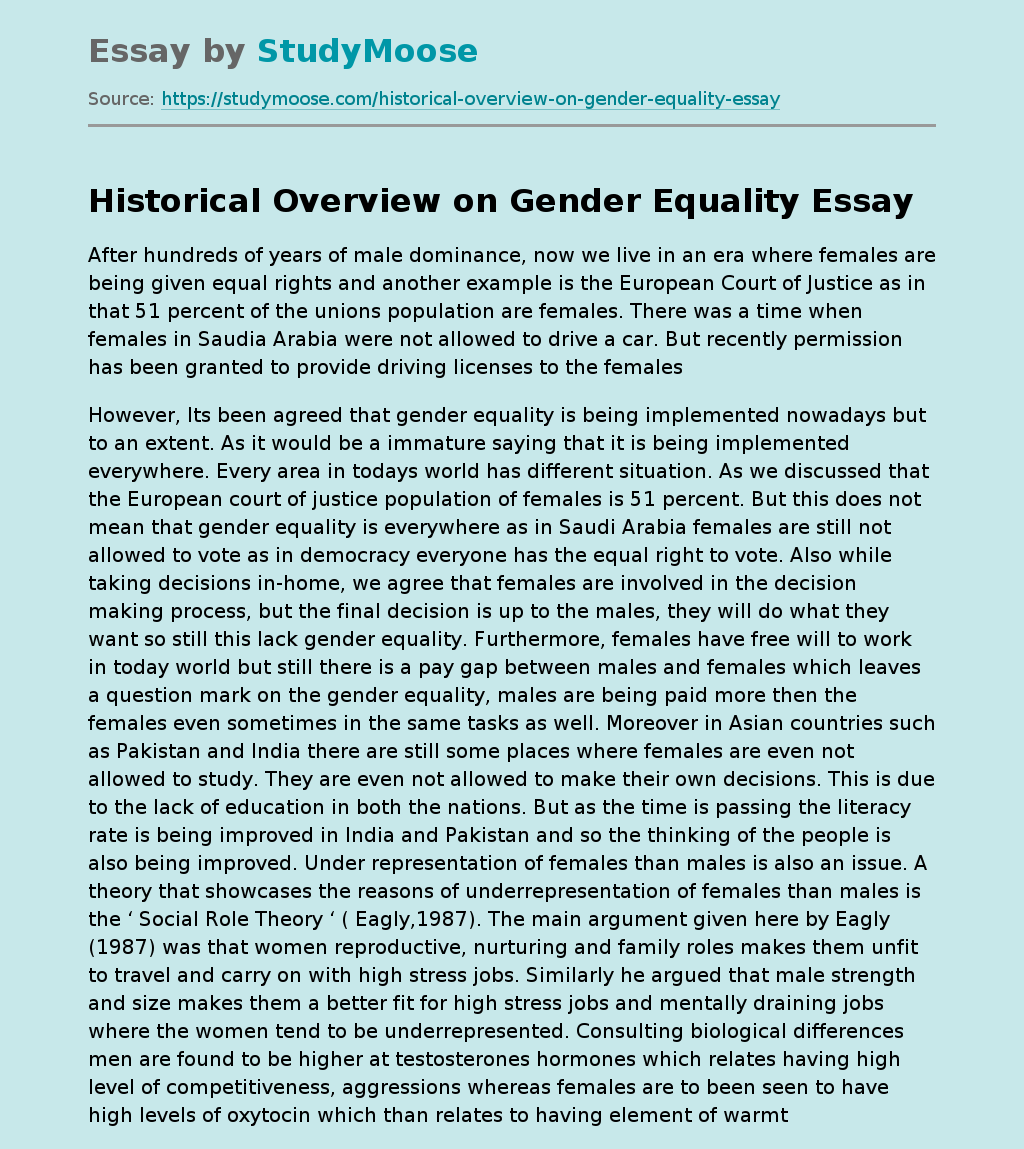