Historical context is related to the political, social, cultural, and economic of today asking for things such as moments, events, or trends. In the 1960s Burgess found out great news about his deadly tumor being misdiagnosed. This led him to complete writing his first draft of A Clockwork Orange.

A year later in 1961 Anthony when on vacation with his wife to Leningrad. This vacation had a very important role in this language he used writing A Clockwork Orange. He picked up on younger language in Leningrad and came up with Nadsat (a register utilized by the droogs in the novel).

Don't use plagiarized sources. Get your custom essay on
“ Historical Context of Clockwork Orange ”
Get custom paper
NEW! smart matching with writer

While writing his second draft of A Clockwork Orange he decided to use the new language he picked up while on vacation making extreme adjustments to the language used in the first draft. Those adjustments greatly impacted A Clockwork Orange. Later Anthony experienced a first-hand look into an oppressive government. The extreme lack of individuality among the citizens made an impact on Burgess.

Proficient in: A Clockwork Orange

He experienced controls that exceeded into arts such as theatre or opera, education controlled by the state, religion brainwashed into nothing, and even parenting. In Britain society during the 1950s- 1960s there was a culture change that caught Burgess’s eye. This new culture change was also known as the new British phenomenon. This phenomenon was youths bringing fear to the older population. Mods or rockers also known as gangs violently engaged in fights in public areas.

This new culture in youths caused Burgess to write about the droogs in A Clockwork Orange. The peace that was once there vanished into something unimaginable. Teenagers engaged in drinking, violence, and making a mess of whatever in their path. What seemed to cause everyone else stressed let Burgess come up with the theme “youthful free will versus scientific conditioning”. Later came the national health service which cared for British citizens medical needs. The welfare made Burgess believe that it put society needs over the freedom of the individual. A Clockwork Orange sheds light onto rape, assault, and many other violent acts causing this book to be hard to understand for many people.

This book is for all ages but might be hard for the younger youths to understand the unrighteous acts in the novel. Burgess wrote this book with the actions that it will help change and motivate oppressed societies. He wanted to inform readers about the issues during that time period. Whether or not the reader understands fully Burgess wanted to show how governments had too much authority by maintaining power and putting restrictions on a person’s freedom. 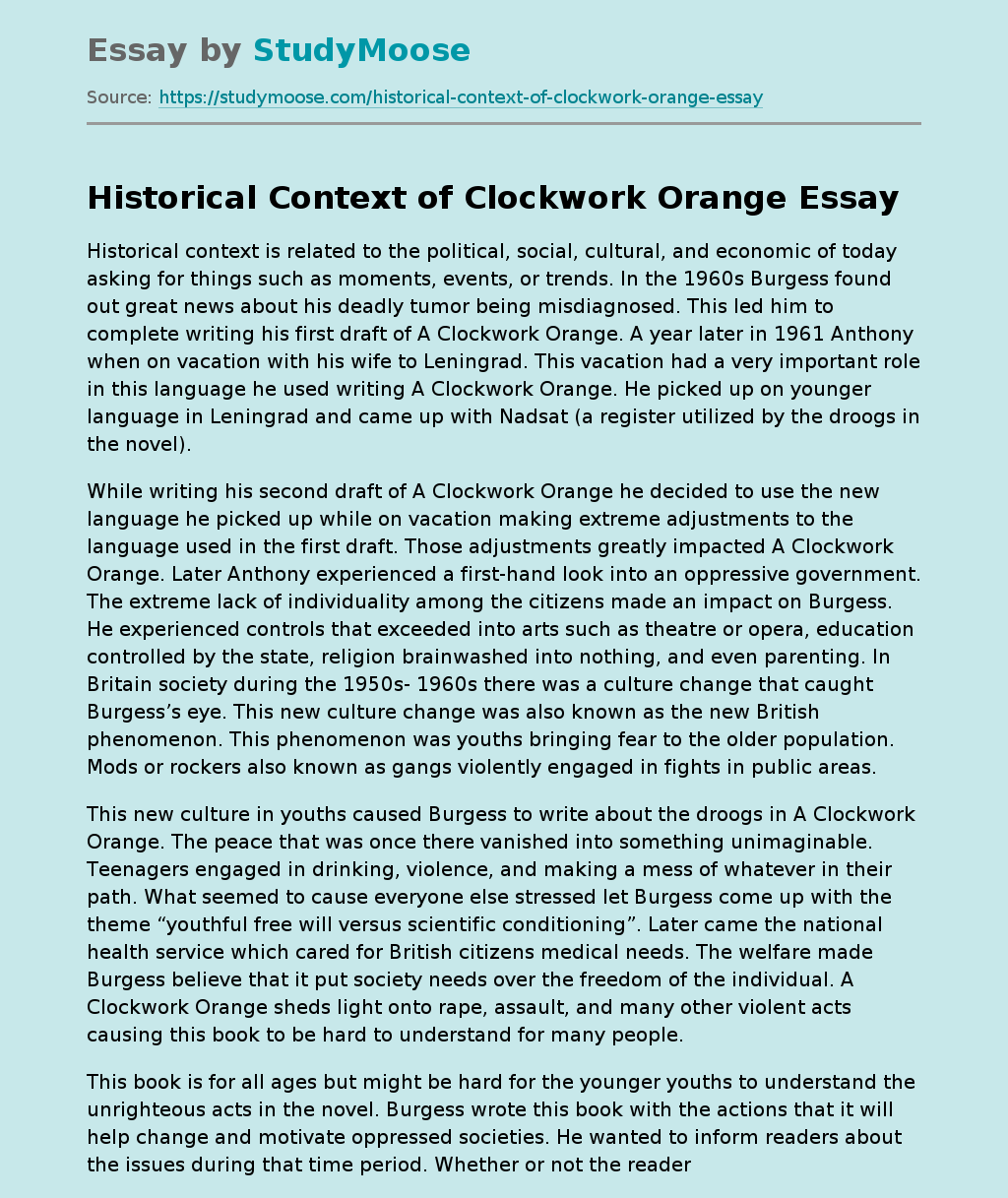