Hines' Novel A Kestrel for a Knave

In Kestrel For A Knave, Hines presents most of Billy’s schooling, and his teachers of any significance that we encounter, in a negative way. The very first teacher we encounter, Mr Gryce, typifies that impression. He is the head teacher of the school and is very strict. The first word Hines uses to describe him is “furious” which gives the reader a notion of what he is like. He walks around with a cane to intimidate the children. During assembly he shouts at a boy for coughing, even though he clearly didn’t see who it was.

Don't use plagiarized sources. Get your custom essay on
“ Hines’ Novel A Kestrel for a Knave ”
Get custom paper
NEW! smart matching with writer

I think that this aspect of his character is not really convincing or realistic at least not by the standards of my own school. This has the effect of making me question Hines’ characterisation, but it does at least make his attitude towards Billy’s teachers very clear. The main thing I notice about Hines’ presentation of Mr Gryce is the way he makes him contradict himself.

An example of this occurs when a child reads from the bible, “Never despise one of these little ones,” and yet Mr Gryce treats younger people particularly badly.

This confirms my impression that we should have no sympathy towards him and suggests that Hines has set out to ridicule him. Gryce even canes Billy for falling asleep during the Lords Prayer. I notice how intimidated the children are by his presence, “When he arrived they formed up as neatly as a hand of cards being knocked together.

” In this respect he is effective as a head teacher, but his unorthodox methods and lack of fairness overshadow this. Mr Farthing is the only teacher that gives Billy a chance to demonstrate his knowledge and excel in class.

He instructs Billy to tell the class a story about himself and if he doesn’t, the whole class must stay after school. Although his action seems quite harsh, I interpret it as a gesture of faith in Billy or children like him. He listens to children and persists with Billy, even after he cries, to get a positive response from him. His gamble pays off as Billy talks in great depth about Falconry, which proves he has the ability to learn but is rarely given the opportunity to shine. Farthing is introduced straight after Gryce.

I think Hines clearly juxtaposes the two characters to reinforce the contrast between their attitudes and teaching methods and highlight both. I find the presentation of Mr Farthing more realistic unlike Mr Gryce because I am not used to teachers like Gryce. However, it is possible that there were head teachers like him in the 50s and 60s. Perhaps Hines wants Gryce to represent the past, a dying breed, “I’ve taught in this city for over thirty-five years now,” and Farthing is the future. The third and final teacher is Mr Sugden.

Hines describes his clothing in great detail as he is introduced, “his football boots were polished as black as the bombs used by assassins in comic strips. ” The use of the word “comic” gives me the impression that he is a character not to be taken seriously. This feeling is confirmed when he first converses with Billy, “Stimulating you fool, s-t-i-m-i-l-a-t-i-n-g, stimulating! ” He misspells stimulating. Most of the passage involving Sugden is written comically, one of the boys is even known by the name, “spotty crew cut,” which sounds like a cartoon character from the “Bash Street Kids.”

I think Hines does this to add comedy to the novel and to lighten the mood after the drudgery of Mr Gryce. Yet, Sugden is similar to Gryce in the way that he treats Billy. After the match, which he blames Billy for losing, he gets his revenge. As Billy is having a shower, he cruelly changes the temperature gauge from hot to cold. He even has boys on either end of the shower to prevent Billy from leaving. This is a huge contrast from his earlier behaviour, one which almost makes the reader feel guilty for having been entertained by Sugden earlier on. He seems to have a vendetta against Billy and is relentless in punishing him.

The treatment he endures fully explains why Billy is unsuccessful at school. It is clear from the way Hines presents the school and Billy’s teachers, that he wants us to dislike them and to sympathise with Billy for having to tolerate their treatment of him. During school, Billy refuses to participate willingly and is uninterested in work. But Hines shows us during Billy’s exploits out of school that he has the aptitude to learn and the ability to demonstrate his know how. He uses his own time, researching Falconry and reading books, to acquire as much knowledge as possible and hand picks his Kestrel himself, which he raises successfully.

Whilst in school we see him in a fight and it appears that he is caned often, although ironically the reason he had a fight is that someone was disrespecting his family. Billy seems to be an introvert and appears to be most comfortable in solitude, or with his Kestrel. I think that Hines is specifically trying to convey that the schooling in Billy’s environment is actually detrimental to his studies and more generally that he only seems to shine in a rural society or environment. Billy’s careers interview reinforces his feelings of disaffection with school.

“Half the time you’re like a cat on hot bricks, the other half you’re not even listening,” the interviewer tells him. I think that his family background could affect Billy’s experience of school. His older brother, Jud, works “down the pit” and Billy possibly believes, inside, that he is destined for the same route and this is what’s expected from him by his mother. He also comes from a poor family and has led a difficult life and possibly believes education and school is just another dead end. It is easy to see how Billy will see school as part of a bigger picture that is negative in his life.

However, both the language and the structure of the novel suggest that Hines too is trying to link the negative experience of school with a wider negative view of society. During the final school episode, Jud is looking for Billy because he didn’t put on his bet, and the horses won. It could be argued that the device of Jud chasing Billy symbolizes Billy’s future catching up with him. Although Jud doesn’t go looking for Billy until the afternoon section of the novel, Hines manages to create the impression that he is after Billy almost from the beginning.

This is established after the description of the paper round when Billy says, “There’s allus someone after me,” and goes on to describe a series of confrontations with Jud, all of which show Jud the miner, in conflict with Billy, “The wild man of the woods,” as Jud refers to him. The contrast is reinforced with the lyrical language used to describe the woods and fields, “Dew drenched the grass, and the occasional sparkling of individual drops made Billy glance down as he passed,” and the brutality of Jud’s speech, “they wouldn’t have a weedy little twat like thee.

” Hines uses Jud to develop the recurring theme that industry, situated in urban areas is bad. Jud symbolizes industry, everything Billy wants to escape. When Jud is looking for Billy after the bet has not been placed, the reader can tell from the opening paragraph of this section that something bad is going to happen, “Afternoon quiet. Darkening sky. Cloud skittering low in thickening hues. ” The usage of the words, “darkening, cloud and low” gives me this impression. Even the way Jud looks for Billy is machine like.

For example, the way he walks is very systematic. “He completed the length of the building then turned round and came back. ” “Click, Click, Click, Click” also allows the reader to picture a machine. Throughout this particular passage, various examples of industry are given. The way schoolbooks are handed in is also methodical, “thirty-six exercise books in one pile, eighteen text books in each of the other two. ” Another image of industry is when Billy goes into the boiling room to hide from Jud. “With the darkness before him and the thick pipe behind.

Hines' Novel A Kestrel for a Knave. (2020, Jun 01). Retrieved from https://studymoose.com/hines-novel-a-kestrel-for-a-knave-essay 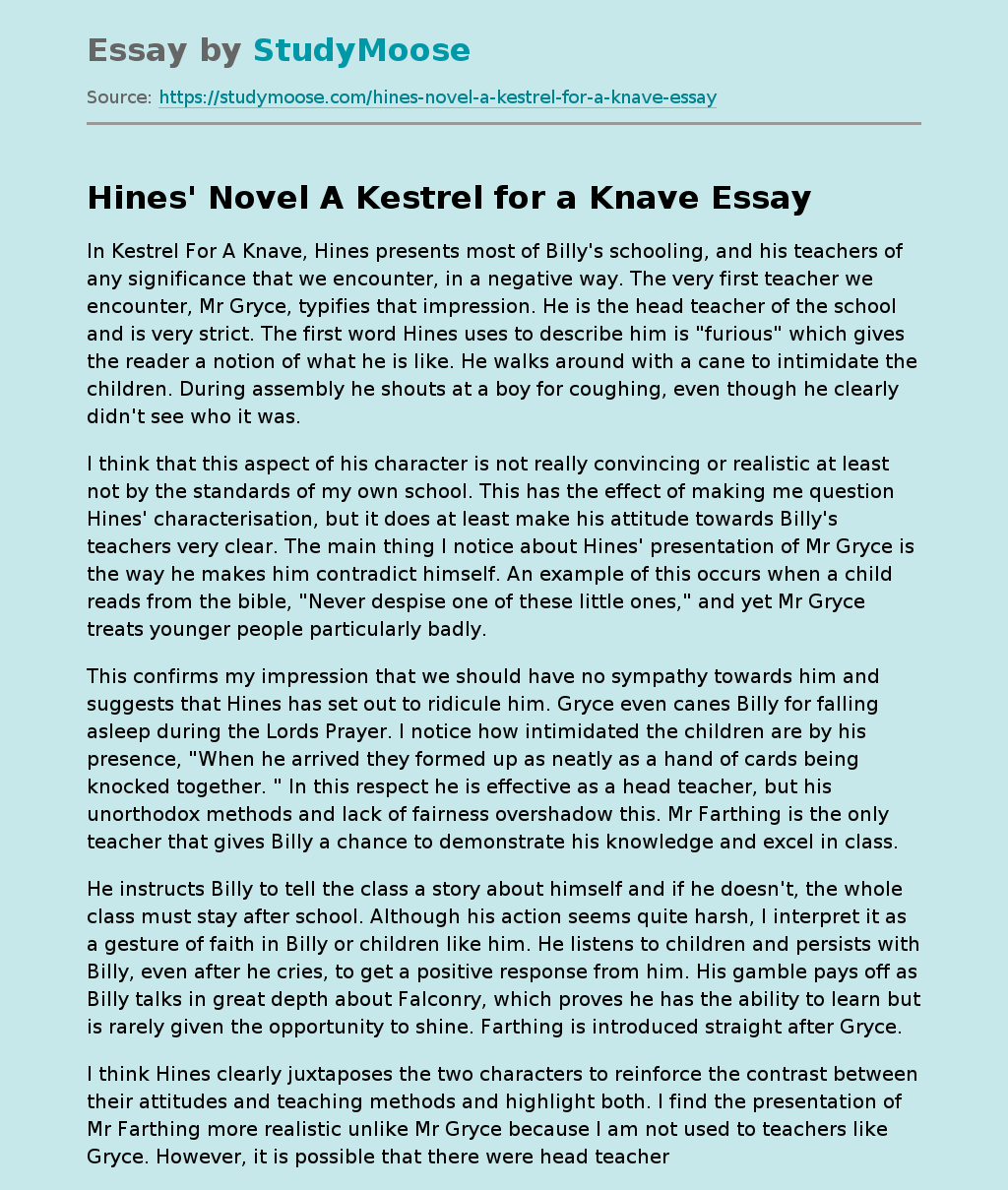