Gattaca is a movie in which a future is explored where accurate genetic manipulation has become common, where children would be born with no defects. Having a child without it having been genetically modified has become rare. In this world, so-called “Gattaca”, a whole new society was created by the ability to measuring the genetic potential at birth. This prediction characterizes them by their capability for making choices in the future, it also determines the life of the individual and is capable of damaging the person, since it takes one’s motivation away.

Don't use plagiarized sources. Get your custom essay on
“ High Technology Society in Movie “Gattaca” ”
Get custom paper
NEW! smart matching with writer

The society in which the film “Gattaca” is played, demonstrates the problems is a designer society. These people, whose genetic potential is being measured, are placed into classes according to the ability. People which had an invalid status had no rights at all or had the freedom of choice.

Vincent, the main character of the movie, was born with and In-Valid identity. Because of this, he was not worthy to his father, neither for society.

His DNI profile had predicted that he had no chance for success and will already die at the age of 30. Vincent’s main goal and dream was to travel into space, but believing in these predictions he had no chance to achieve this. His family didn’t support him and constantly reminded him of his disability. As his father says: Let’s be realistic…the only way you would see the inside of a space ship is if you were cleaning it… Because of the facility for science to restrict with his future, Vincent’s in-valid identity was inevitable: my real resume was in my cells.

On the other hand, Jerome character from Gattaca was blessed with the perfect DNA. Because of this he had a whole life in front of him and had all doors open for him to do what he wanted to. Although one could say that this genetic potential measurement he had at birth came with the disadvantage that “Jerome was never meant to be one step down on the podium”, according to the scientists and his DNA, but that is where he ended up in. Because of this, he had tried to commit suicide, which didn’t succeed and led him in being in a wheelchair for the rest of his life. This shows that these genetic potential measurements can change and ruin one’s life. If a person can’t live up to their expectations they won’t want to live anymore because they will think they are a failure. On the other hand, if you already know at birth that you have no chance of achieving anything in life, it takes away all your humanity and rights.

This perfect, high-technology society that ‘Gattaca’ tries to represent was impossible to make. They were trying to make their society basically purely out of robots, and telling people which weren’t perfect that they were cripples invalids.

Irene, another character from ‘Gattaca’, had her genetic potential measured at birth. Her result was that she was very likely to have heart failure. Because of this, she was told that she could never achieve anything, which she had to accept and believed. Predictions like this ruin your life in ‘Gattaca’. Nevertheless, Vincent had a 1% chance that there was nothing wrong with him. He believed in this 1% and gave it a chance, he didn’t let it ruin his life. By doing this he had the power of creating his own life, without being influenced and getting demotivated. ‘Gattaca’ looks for even the tiniest flaw that one might have. Sadly, for Irene, her character wasn’t the type that had hope or courage, which gave her no real chance of success.

In ‘Gattaca’ it is proved that one’s genetic potential can’t be measured at birth. These measurements only influence people which really believe in this. Anton was a ‘valid’ person, he was told he could achieve anything he wanted to, he believed in his own potential: ‘I bet I could be one (an astronaut) if I wanted’. His parents were only grateful for Anton and not for Vincent as he was an ‘In-Valid’. They believed that he was going to be the success if the family. Nonetheless, the fact that Vincent, the In-valid brother, had beaten Anton not only in a swimming competition, if not also in life, proves that their predictions weren’t accurate. This had convinced and motivated Vincent that he can achieve something in life, other than Anton, who was shocked for his failure. This proved that the genetic potential measured at birth doesn’t work and shouldn’t influence people’s success.

The technology was very advanced in the world of “Gattaca”. It shows the problems that come with this high technology which had the ability to measure one’s potential at birth. For a person to be successful in life it depends more on their character and motivation to do so and it doesn’t depend on their DNA. This film shows that DNA can’t predict one’s future and that it is impossible to measure their potential this way. Allowing this measurement is capable to control a person’s life, not letting a person live up to their capability. 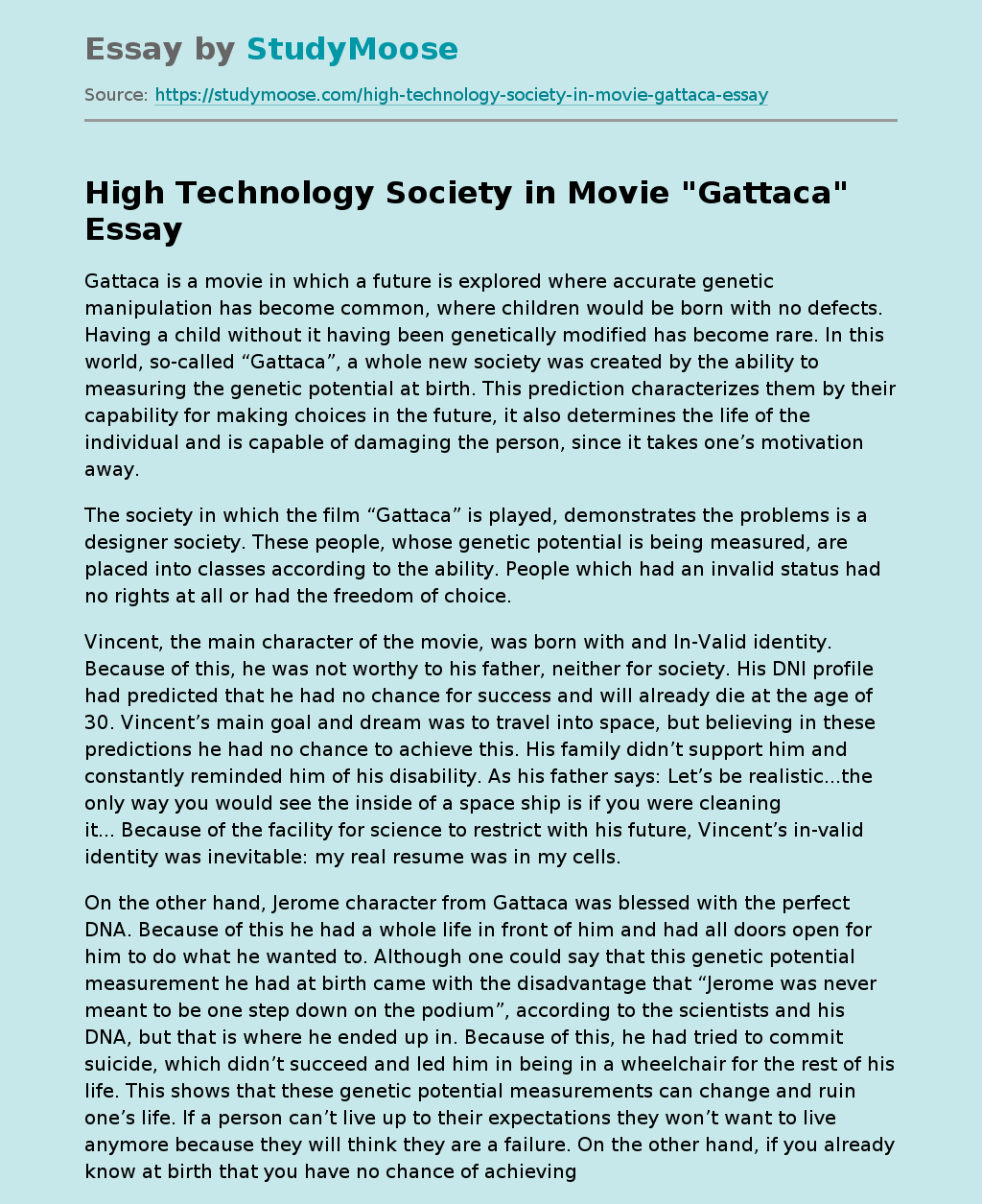