In the poems Hide & Seek and Prayer Before Birth, one of the main themes in innocence. Innocence can be described as a lack of maturity, experience or social intelligence which derives in the incapacity to understand and interpret given situations. In Prayer before Birth, through the boy’s fears and beliefs, innocence is conveyed. In Hide & Seek, through contrast with the theme of war and the strong excitement of the kid about playing the game, innocence is conveyed. For instance, in Prayer Before Birth, MacNeice portrays the theme of innocence through the verbalization of the unborn child’s worries on his future, especially on what the may possibly be obliged to do.

Don't use plagiarized sources. Get your custom essay on
“ “Hide and Seek” by Vernon Scannell and “Prayer Before Birth” by Louis Macneice ”
Get custom paper
NEW! smart matching with writer

He explains his fear about how the people would dragoon me into a lethal automaton’. This is clearly linked to the poem Hide and Seek, where the author also portrays the theme of innocence through the contrast between a game of Hide and Seek and the theme of war.

The use of the verb dragoon, makes the reader think that the child will be violently forced to kill and that it clearly goes against his will. A lethal automaton’ has war connotations, and conveys the image of a killing machine, with no feelings, just created to kill, which juxtaposes with some wishes of the boy aforementioned in the poem by the boy. This adds to the feeling of innocence as it may be thought that the child has no control over his future, and that he will just simply be made to act and think as people from his surroundings want him to do.

Also, the idea of being an unborn child and not having even been born helps to create the ongoing feeling of innocence in the poem, mainly due to the fact that the child has no experience in life.

On the other hand, innocence is conveyed through the narration of the game of hide & seek, where the author drops some metaphors that aid to convey innocence. The boy describes the smell as the sacks in the toolshed smell like the seaside’. The poem begins with the obvious energy of the child as he calls out to the other children to come and find him. This energy is an easy parallel to the energy of an individual who decides he is ready to conceal his sense of duty for all his responsibilities in order to ‘play’ the ‘game’ of life. He hides in a tool shed- which could be thought of as an allusion to the fact of storing your responsibilities while you are a kid, being innocent and negligent. Even though he is in the tool-shed it smells of the seaside; this could easily symbolize how delusional he is to hide away in a tool shed and to think that he is close to the seaside. While he sits and waits for others to come to find him, he doesn’t want to be found. He doesn’t want to call out for others to help him as they may pull him back to the reality outside his ‘game’ his responsibilities. So he does not ‘risk another shout’ whilst considering himself all the wiser for it. All of this portrays the innocence of the kid.

Again, in Prayer Before Birth, MacNeice conveys innocence through the use of some phrases which express how some problems are much larger for the unborn child than for a normal adult. These phrases describe the child’s fears and accentuate how childish the child truly is, ‘blood-sucking bats’ and ‘club-footed ghouls’ these may seem comical to the reader but from the perspective of the unborn child they are indeed their worst nightmares, further proving the child’s innocence. Furthermore, the child refers to itself in first person a staggering amount of times, each stanza but the last is started with I’ while me’ and my’ are very common too. This gives the reader of the poem and insight into how frantic the child may be as the pace of the poem seems to be increasing throughout, the child seems only to be concerned with their own safety. This reflects a somewhat immature character that is yet too narrow minded to be afraid for anything that will not concern them. This has a clear link with the poem Hide & Seek, where even though the child has been born and has already some worries and problems, still his main concern is a game of hide and seek, which prooves the greate innocence of the child.

Furthermore, in the poem Hide & Seek, through the use of first-person and making the reader stand in the position of the child, innocence is conveyed. The poet uses a technique where the poem goes to the first person’s perspective of the child. The sentences say “They will never find you in this salty dark. But be careful that your feet aren’t sticking out”. These sentences put the poem through the child’s eyes as he sees this game as a matter of life and death. This technique could be known as war imagery as the sentences relate to what the commander would shout in the middle of a war. This suggests that the child feels this game is as serious as that and that is what the poet is trying to do. The poet then uses the senses. The sentence says, “The floor is cold”. This sentence would make the reader feel as if they were the child as reading what he felt would make the reader empathize and share the feeling. The poet uses this technique to create tension as when the floor is cold it reminds the reader of what the child is going through and which, in his mind, is scary.

Also, cold relates to war and the theme of war, and how in the trenches it would have been very cold, which adds to the ongoing juxtaposition of war and an innocent game. The sentences then get far shorter and the use of war imagery is increased as it says things like “You mustn’t sneeze when they come prowling in” which suggests that the child’s friends (or the people he is playing this game with) are seen as predators to the child as that is how they are described. This is a tactical sentence with strategic words within it. The other sentence says “and here they are, whispering at the door” which also suggests that these people are trying to get to the boy without him noticing, just like they would do in the war, or like a predator trying to hunt its prey would do.

The ongoing juxtaposition between war and the game really helps to convey the theme of innocence in the poem. In conclusion, an initial comparison of Hide and Seek’ and Prayer Before Birth’ would suggest that the similarities and differences between both texts are straightforward. However, having explored the ways in which these two authors depict the theme of innocence, it can be concluded that both poems convey innocence through empathy and first-person. Then, in Prayer Before Birth, the thoughts and feelings of the child on his future are verbalized to convey innocence. On the other hand, in Hide and Seek, Scannell narrates a game of hide and seek and juxtaposes it with war and trenches to convey the innocence of the child.

"Hide and Seek" by Vernon Scannell and "Prayer Before Birth" by Louis Macneice. (2020, May 07). Retrieved from https://studymoose.com/hide-and-seek-by-vernon-scannell-and-prayer-before-birth-by-louis-macneice-essay 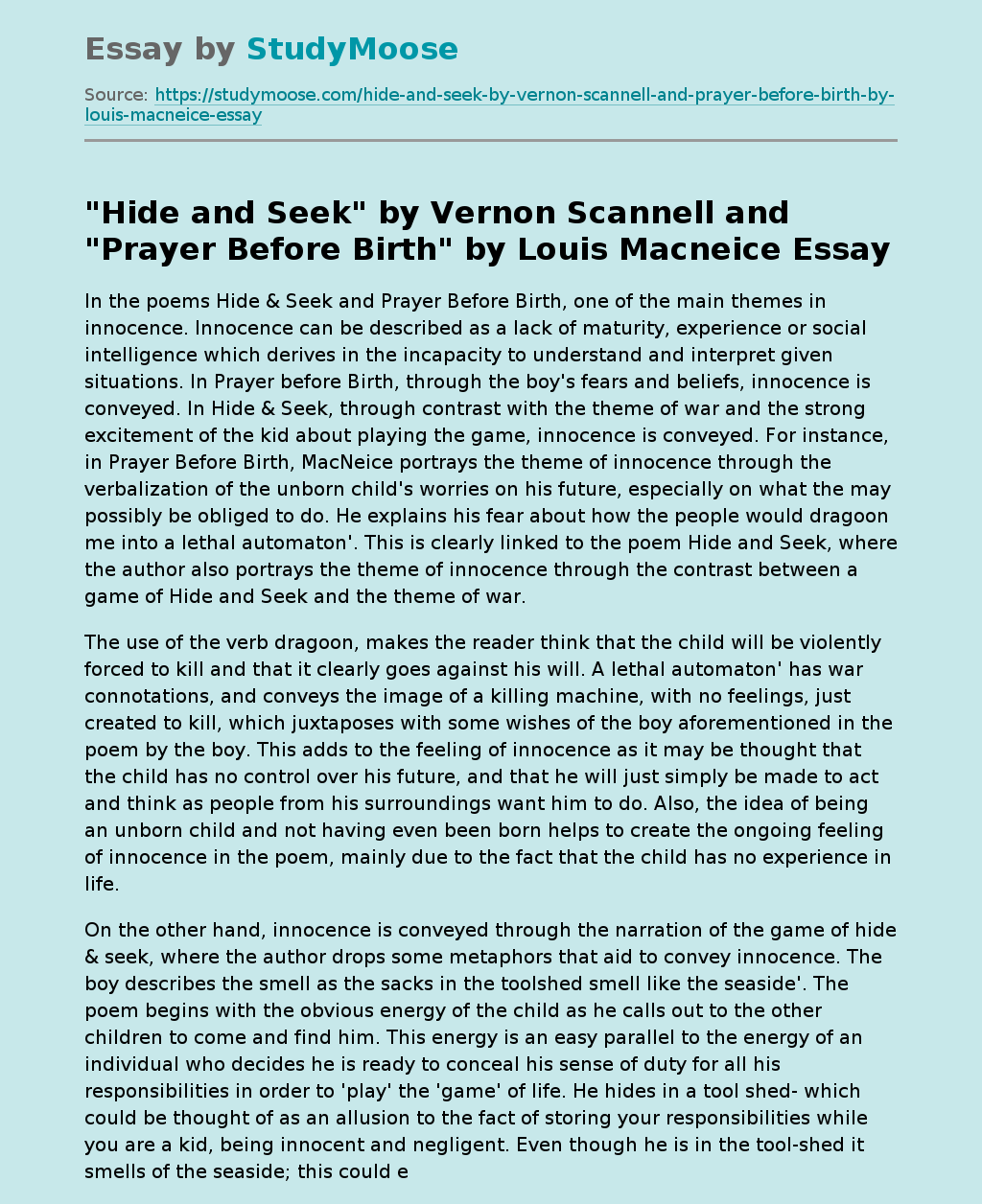