Sin is when a Christian does something which is not permitted by God. In the novel The Scarlet Letter, the protagonist Hester Prynne committed a sin which is known as adultery. She had a kid with someone other than her husband. As a result, the puritan society decided to put an A on her chest so when people see her, they know she committed adultery and is punished for this sin. Arthur Dimmesdale is who committed Hester committed adultery with, and ironically, he is a minister.

Don't use plagiarized sources. Get your custom essay on
“ Hester Prynne ”
Get custom paper
NEW! smart matching with writer

Roger Chillingworth is the husband of Hester, and he is a physicist. And finally, the result of a sin, Pearl is Hester’s daughter. It is believed that Hester values individualism/privacy and equality/fairness as an American with American values. And also, if Hester were to come to day’s world and learn about the election, she would find abortion and very important topic however same-sex marriage the least important topic. As a conclusion, she would vote for Obama.

The American value Individualism or privacy is a characteristic often seen from Hester. The scarlet A is a symbol of adultery to the people within that puritan society and this letter causes Hester to be alone, excluded from the community, and looked down to. People see her as an evil and sinful witch. On page 76 of the penguin classic version, it is said “In all her intercourse with society, however, there was nothing that made her feel as if she belonged to it. Every gesture, every word, and even the silence of those with whom she came in contact, implied and often expressed, that she was banished and as much alone as if she inhabited another sphere, or communicated with the common nature by other organs and senses than the rest of the human kind.

” This quote shows that she was very lonely because of the Scarlet letter. And this causes her in get use to being individual and being private. When she was released from jail and was walking on the streets of Boston, the public would gaze at her. “Never, since her release from prison, had Hester met the public gaze without her. In all her walks about the town, Pearl, too, was there…”

In the 17th century puritan society in Boston, individualism/privacy is a not an important value; however to Hester, it is very important. One believes that she thinks it is necessary for every single individual to be alone for a certain amount of time in a day and she also thinks that it is necessary for every individual to have privacy for a same amount of time in a day. When Hester is alone she can speak to Pearl openly about anything. And staying away from the public is what she wants because they would stare at her. On the other hand, in today society, it is totally different. People often like to social with a group of people and the more people the better. People also like to go clubbing. In contrast, there are time when people have to leave from a crowd and being alone to think about things, to complete necessary work, or to just relax. If Hester had an opportunity to travel into the modern society, her view on individualism and privacy would be different. Hester would believe that it is necessary to have privacy and be alone half of the time, however, in order to survive socially, half of the time people should get with a group of people and do whatever should be done.

The American value equality and fairness is seen throughout the American culture since the United States is a democratic nation. Equality and fairness is the idea of everyone being equal. In the scarlet letter, we can see that Hester values equality and fairness because she is not equal to everybody else and she is treated different from everybody else because of the scarlet A. However after many years, the sin of adultery was forgotten and she started to help the community. “Individuals in private life, meanwhile, had quite forgiven Hester Prynne for her frailty; nay, more, they had begun to look upon the scarlet letter as the token, not of that one sin, for which she had borne so long and dreary a penance, but of her many good deeds since. ‘ Do you see that women with the embroidered badge?’ they would say to the strangers. ‘It is our Hester, the town’s own Hester, who is so kind to the poor, so helpful to the sick, so comfortable to the afflicted!'” And gradually, the scarlet A went from representing adultery to representing able. “…that many people refused to interpret the scarlet A by its original signification. They said that it meant Able; so strong was Hester Prynne, with a women’s strength.” These quotes show that as time passes, Hester gradually becomes equal to the others and she starts to value it because before, she was never the same as other members of the community.

In the puritan era, everybody is equal as long as nobody committed a sin. If you committed a sin, you would be treated like Hester. And because she is being treated like that, Hester back then would value equality and fairness. She believes that everybody should be equal including herself; she would believe that it is not fair for the puritans to treat Hester like this just because she committed a sin or did something wrong. In contrast to the modern world, today the government tries to make everybody equal even when one has committed a crime. If Hester could come to today’s world, she would believe that the society today is much better than the old puritan society because the government doesn’t treat Hester unequally even if she has committed a crime.

In the 17th century during the puritan era, the government was a theocracy government and it was basically the church. The laws are the laws of God. If Hester Prynne had the chance to visit the modern world, she would be very interested in watching the elections of the United States. At the same time, she would be very interested in issues of the elections. It is believed that abortion is the most important issue to Hester because she had a child with a person who wasn’t her husband and if she did not anyone to know about it while abortion was illegal, people would find out. But if she wanted to abort it while it was legal, she could and not let anyone know about it. Under the puritan society, it would be impossible to abort it because according to the bible, it is a sin to abort an embryo that has already been fertilized because it is believed to be the same as killing a life.

It is believed that the least important issue to Hester Prynne is same-sex marriage because this issue would only cause society problems; where as the other issues can cause bigger problems such as the death of million innocent civilians. To the puritans, this issue is where they would obey the bible, and the bible says that same-sex marriage should not be allowed. To Hester, this issue is pointless and it cannot change much of the nation; it just reduces social problems.

As Hester goes through the issues, she also decides to which candidate she would vote for if she could. It is believed that she would vote for Obama because for many issues, she believes what Obama believes. She believes only the rich people should be taxed because they have the money to pay for it. For abortion, she believes it should be legal because she might accidentally conceive a child and want to abort it. Hester dares to do what law forbidden, which is believed as a very liberal action, and when she wanted to resolve with her former husband rather than continuing the fight; that is also very liberal.

Hester is a woman who has the courage to face her sin, her shame. However at the same time, she is very passionate towards the people she loves such as Pearl and Arthur. She takes risk in order to accomplish goals, and she commits a sin by loving someone. She is intelligent and capable, and extraordinary situations make her important as a protagonist of The Scarlet Letter. 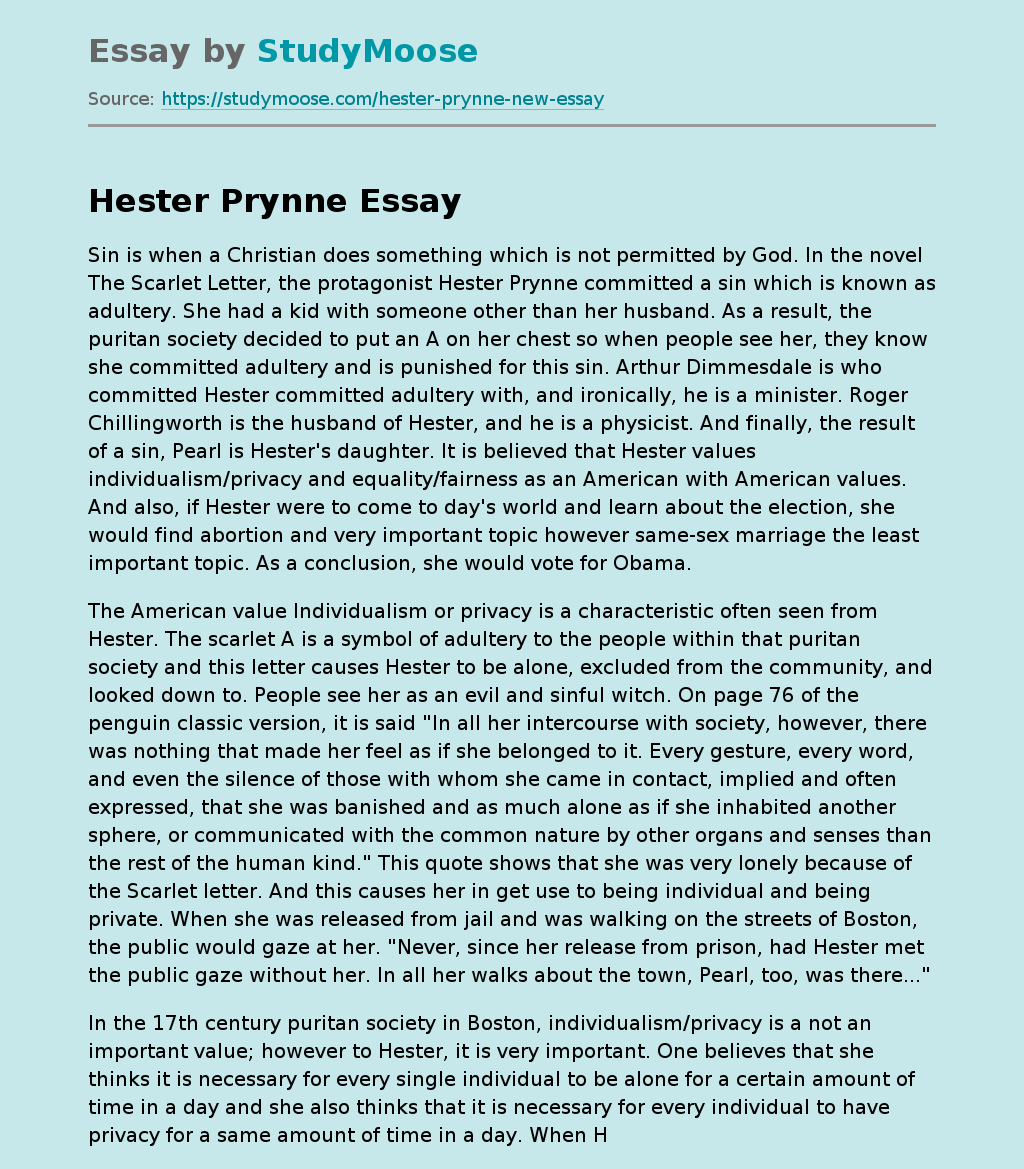